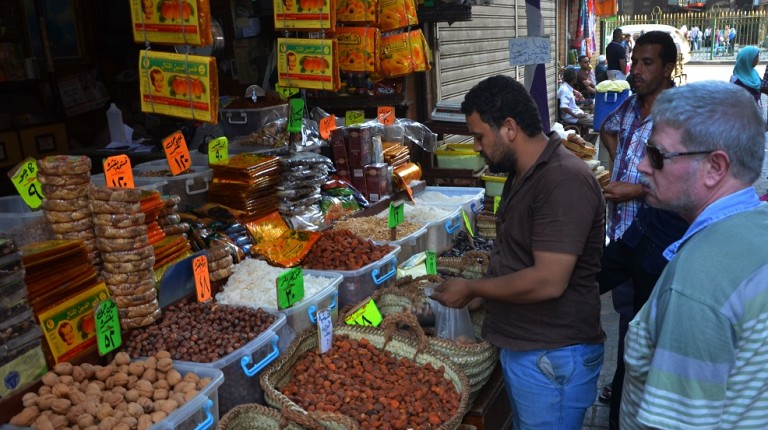 A few months ahead of the holy month of Ramadan every year, supermarkets and spices shops start to devote large sections to be filled with yamesh, nuts, and other types of dry fruits, as part of Egyptian tradition during the holy month.

Egyptians are always keen to buy these products as a main custom during every Ramadan, to be used for making special juices and desserts that can only be seen on food tables during Ramadan, but for the past two years, the situation of the products’ prices prompted some to back off of buying them. Price hikes also sometimes lead them to save expenses for more important items.

A few days before the beginning of Ramadan, Egyptian families begin to dedicate a certain budget for buying all food products that will be consumed during the month, at sufficient quantities for the 30 days.

Because during the fasting hours, no food or drink is consumed, for iftar, people prepare a variety of dishes of oriental food every day throughout the month, which requires them to buy large quantities of vegetables, meat, chicken, and other products. In Ramadan particularly, people tend to send out more invitations to family members and friends, so they can all have iftar together.

Throughout 2017, it was common for the majority of Egyptians to complain of how the monthly budget dedicated for the supermarket became insufficient for them to secure all their needs.

For the second constructive year, prices of yamesh and nuts have continued to be unaffordable for many families.

Egypt’s monthly inflation rate rose by 1.5% in April 2018 compared to March 2018, while the annual inflation rate declined from 13.1% to 12.9% during the same period, according to Central Agency for Public Mobilisation and Statistics (CAPMAS).

Egypt’s annual inflation peaked in July 2017 when it neared 35%, but it gradually declined over the following months until it reached 12.9% in April 2018.

Since the Egyptian pound’s flotation in November 2016, retailers have raised the prices of different products, including food, medicine, electronics, and fuel, as well as electricity services, making life more difficult for Egyptians. Products that also faced great price hikes were those imported from foreign countries, which increased due to the rise in the US dollar value against the pound. Prices are expected to face extra increases after the expected further slashing of fuel subsidies this summer. The planned move is a continuation of measures taken to reform Egypt’s economy through a programme backed by the International Monetary Fund, tied to a $12bn loan agreement.

Sales of local Ramadan delicacies have decreased, as unlike every year, the section devoted to these products in shops witnessed moderate turnout.

So far in Ramadan 2018, the markets of yamesh have experienced a recession because of the low demand by citizens to buy, which caused some traders to reduce prices out of fear that their goods would expire and hence their inability to sell them if stored for the next season.

In April, the spices division of the Cairo Chamber of Commerce said that the prices of yamesh, dates, and nuts will see an increase of 15-20% this year compared to last year.

Since yamesh and other Ramadan delicacies are not categorised as essential goods, they are therefore subjected to the increasing of their prices.

Amr Asfour, secretary general of the food division of the Cairo Chamber of Commerce, said that the prices of raisins and almonds have also risen, while the prices of hazelnuts and apricots have stabilised during the season compared to last season

Asfour said the price of raisins rose from EGP 86 per kilogram last year to EGP 100 this year, and almonds rose to EGP 230 per kilogram instead of EGP 200 last year.

What is the state doing?

Members of the Egyptian Parliament unanimously stressed the importance of the government tightening its control over the markets to adjust prices and prevent monopolistic practices during the month of Ramadan. They raised a number of requests for briefings to Parliament Speaker Ali Abdel Aal, demanding that the concerned ministers properly follow-up on the issue.

Member of the Nation’s Future Party parliamentary bloc Badawy El-Nawashy said, in press statements to privately-owned newspaper Al-Shorouk, that monitoring the situation of markets and the adequacy of goods in meeting the needs of citizens is important. He suggested that if necessary, the parliamentarian himself would visit the markets to ensure the readiness of the government and its procedures to monitor the markets.

He also said that there is coordination among lawmakers, government agencies, and regulatory bodies, which are closely related to the markets and commodities, such as the Consumer Protection Agency and supply centres, to prevent the monopolisation of goods and control of markets, and deal with those exploiting citizens with deterrent measures. Otherwise, parliamentarians can use their authority to hold individuals accountable, he said.

Regarding the briefing, parliament member Saeed Hassanein submitted an inquest to Abdel Aal to inquire about the government’s clear steps to ensure the needs of citizens during the month of Ramadan, saying that the procedures relevant to the tight control of markets should be clear and visible to all.

Hassanein said in his request that the availability of basic commodities in Ramadan and their accessibility to citizens, without increasing their prices, is an essential task of the government, and that parliament is required to implement a  supervisory role to ensure the completion of all these steps.

Moreover, member of parliament’s economic committee Abdel Hamid Mohamed stressed on the importance of the successive meeting of the government with members of parliament in the coming period in order to follow the efforts that should be made to control prices and monitor the markets.

Economic experts have previously suggested implementing a recent ministerial decision to oblige retailers and producers to write prices of products on their packages and that they should be commensurate to the prices originally bought at. as The measure is meant to solve the issue of various retailers pricing the same products differently in the same area.

For Ramadan 2018, Minister of Supply and Internal Trade Ali Meselhy formulated a plan to provide all products to citizens throughout the holy month through establishing “Ahlan Ramadan” exhibitions in various governorates, so commercial chains and major producers can present their products at reasonable prices.

Regarding the availability of food commodities in other areas, the minister agreed with representatives of food production companies to not increase food prices by more than 15%. He further ordered sales to be at wholesale price and the increases of supply of commodities, meat products, and poultry throughout the holy month at their pre-Ramadan prices, as the Food Industries Holding Company will bear the difference in the cost of meat and poultry to ease the burden on citizens.