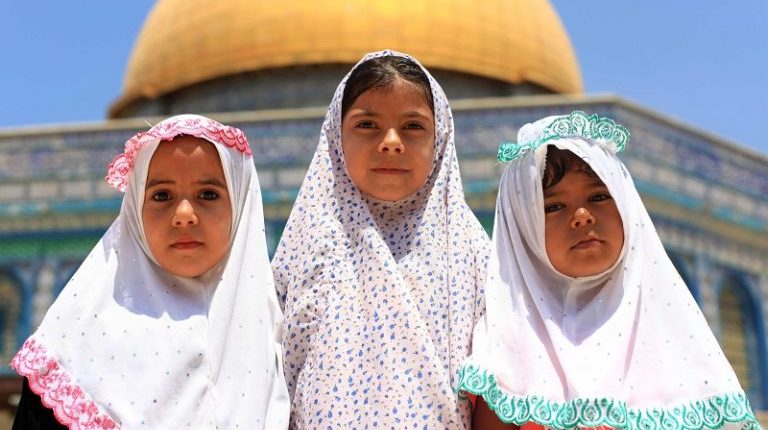 Palestinian customs, traditions, and special manifestations distinguish the holy month of Ramadan from other times of the year. These customs were transferred along different generations and preserved until today in the character of the Palestinians. This year, the Palestinians are commemorating the Nakba of 1948 and celebrating Ramadan at the same time.

Despite ongoing violence and the growing Israeli military presence in Palestine, the Palestinians decorated their streets with colourful flags and lights in a cheerful and cooperative atmosphere between young people and children.

The celebrations start before the holy month, especially at the moment of sighting its crescent in Palestine and neighbouring countries.

Since the beginning of fasting, Palestinians start to perform prayers and invocations in mosques. The children take to streets holding different types of lanterns, spreading joy in the neighbourhoods.
Mesaharatis (traditional dawn awakeners) wander in the streets of Palestinian cities and villages, striking their drums and singing special Ramadan songs to awaken Muslims for their suhoor (late night meal) before the day’s fast.

Jerusalem is characterised by special traditions, notably the Ramadan cannon, which fires everyday throughout Ramadan to notify worshipers that it is time to break their fast. The inhabitants of Jerusalem have heard the firing of the cannon during Ramadan for hundreds of years, until it became the city’s legacy. Jerusalem’s cannon is located in the Mujahideen Islamic Cemetery in al-Sahira gate area on Salah al-Din street in the middle of the city.

Other cities, such as Qalqilya, use zamour iftar (siren of fasting) in mosques to notify worshipers of the sunset time to break their fast.

In the Gaza Strip, the Palestinians suffer continuous power outages, and therefore tend to have iftar and spend the night by the sea.
One of the most beautiful habits of the Palestinian people is the family iftar, where children and grandfathers gather to have the fast-breaking meal. Most of the Palestinian families are low-income and large in number, however, their women always manage to prepare many delicious dishes of various types that fill iftar tables.

Palestinian cuisine has many dishes in Ramadan, of which certain types are preferred in certain regions over others. In Gaza, they usually eat maqluba, sumaghiyyeh, and maftoul. In the West Bank, they have musakhan and mansaf. Pickles and salads are always served with Palestinian iftar.

Palestinian Muslims, like many others, break their fast with dates. Qatayef can be the main dessert for Palestinians throughout Ramadan. Other main desserts include harissa and basbousa and cheese kanafah (pastry) which became a symbol of the city of Nablus.

In Ramadan, generosity and goodwill increase, social relations improve, and people are, more than any other time, eager to help each other. Palestinians in Ramadan also get invited to join their relatives and friends for iftar. They share food and sweets as a sign of cooperation, love, and charity. One of the famous customs there is “fakdat Ramadan” where families visit their married female members at their houses to have iftar together and bring food, grocery, and desserts. In turn, those women visit their families, accompanied by their husbands and children, so that they could feel the warmness of family gatherings.

Another beautiful custom in Palestine is the women’s keenness to make a schedule of iftar meals throughout the month.

In Ramadan, charity increases as neighbours exchange dishes they made for iftar, while charity banquets are held everywhere, especially by foreign organisations in the vicinity of Al-Aqsa mosque and refugee camps in the Gaza Strip.

City of Sun: A place of refuge for the holy family