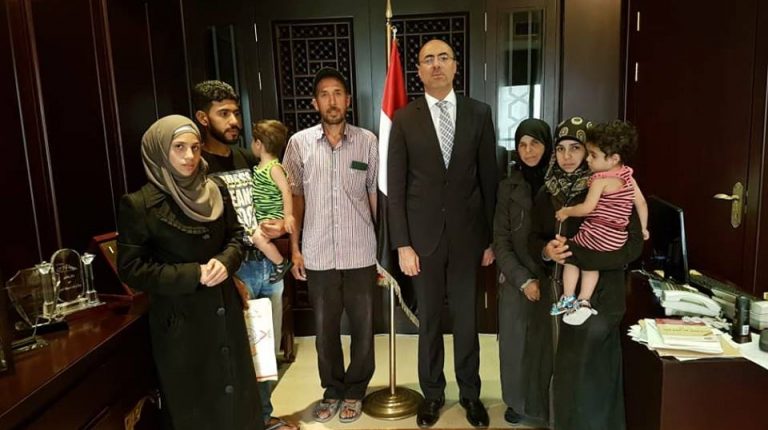 Egypt’s Ministry of Foreign Affairs announced on Sunday that the Egyptian Embassy in Damascus succeeded in reaching seven Egyptian citizens who were stuck in shelters camps for the people of Ghouta, who were evacuated because of the military operations there.

Tharwat received Ahmed Mahmoud Mousa, who was released on Saturday from Adra camp, and Tarek Mohamed Amin and his family, which consists of his mother, sister, and his Syrian wife Marwa Marwan Bakeer, in addition to his children, were released from Nagha camp.

According to the statement, the Egyptian Embassy in Damascus previously released another Egyptian family from the region of military operations in Ghouta, weeks ago. The embassy is working on facilitating the travel of the seven released people to Egypt.

In February, the Eastern Ghouta region of Syria witnessed a critical humanitarian situation as Syrian forces backed by Russian warplanes bombed the Damascus suburb, killing more than 270 people, including 60 children, in a few days.

Since the beginning of the uprising in 2011, thousands of people have been killed, as the uprising turned to a civil war and the regime of Bashar Al-Assad, the Syrian president, brought in forces from allies Iran and Russia, in addition to the Lebanese Hezbollah militia, to support him against the rebels. On the other side, hundreds of jihadists from all over the world went to Syria to support the Syrian rebels against Al-Assad.