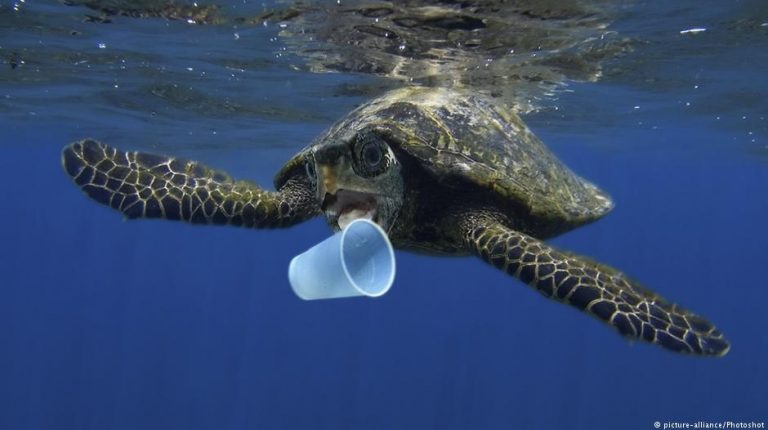 Plastic utensils, straws, coffee stirrers and cotton swabs may soon be a lot harder to come by in Europe. The EU Commission presented a draft directive to ban the single-use products in the fight against plastic waste.The European Commission proposed new EU-wide rules on Monday aimed at reducing plastic pollution in cities and oceans by banning several plastic products.

EU officials noted that the single-use plastic objects and fishing gear accounts for 70 percent of trash in the ocean and that the move towards “innovative alternatives” could create some 30,000 jobs.

What they are proposing

In their draft directive, the EU Commission took aim at the top 10 single-use plastic products that wash up on Europe’s beaches and are found in its seas:

A ban on the private use of disposable plastic products like straws, plastic plates, plastic utensils, plastic coffee stirrers, cotton swabs with plastic stems and plastic balloon holders.
Curbing the use of plastic cups for beverages as well as plastic food containers, such as the ones used for take-away.
Producers of certain products will be required to help cover the costs of clean-up and waste treatment, including: tobacco products with filters (such as cigarette butts), plastic bags, candy wrappers, potato chip packages and wet wipes.
Menstrual pads, wet wipes and balloons will be required to add a label indicating how the product should be disposed.
Producers of fishing gear — which accounts for 27 percent of beach litter — will be required to cover the costs of waste collection in ports.
Each member state should use a deposit system or other measure in order to collect 90 percent of plastic bottles used in their country by 2025.
An increase in consumer information about the dangers of plastic packaging.

‘Europeans need to act together’

EU First Vice President Frans Timmermans hailed the draft directive, saying: “Plastic waste is undeniably a big issue and Europeans need to act together to tackle this problem, because plastic waste ends up in our air, our soil, our oceans, and in our food.”

He added that there would be a particular emphasis on substituting banned or reduced items with eco-friendly alternatives.

The German government signaled its approval of the European Commission’s plans in comments to ARD on Sunday. Environment Minister Svenja Schulze, a member of the center-left Social Democrats, told the broadcaster that single-use plastics “should be regulated at a European level and be gradually taken out of circulation.”

Possible pushback: The EU is hoping to fend off consumer anger over the possible changes by educating the public about environmentally-friendly alternatives to the plastic products that may end up being banned.

The danger of plastic waste: Plastic waste poses life-threatening dangers to ocean-dwellers, birds and animals further up the food chain. Many animals consume the waste or get caught in it, eventually becoming sick and possibly dying as a result. What’s more, microplastics take thousands of years to degrade, meaning the plastic trash that’s blowing around on the street or landing in lakes, rivers and oceans will remain there for some time.

What happens next? The proposed directive will now go to the European Parliament and the European Council for approval. Should the directive be approved, EU-member states will be given a deadline to adapt to the changes. EU Commission officials urged for institutions to “deliver tangible results” before EU elections in twelve month’s time.