Sarwa Capital intends to offer a share of its capital on the Egyptian Exchange (EGX) at the end of the third quarter (Q3) of this year to finance a capital increase and partial exit of some of its major shareholders, with a total value of $150m

Sarwa Capital hired Beltone Financial Holding as the sole financial adviser and bookrunner, while Matouk Bassiouny will serve as the legal adviser. 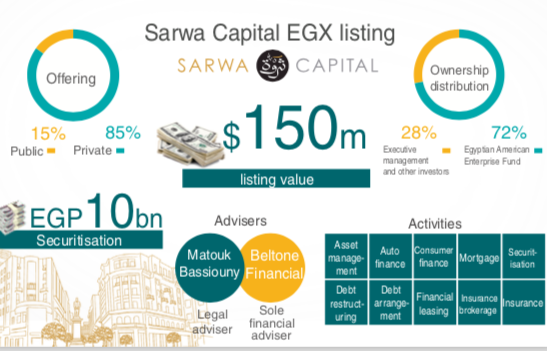 The company is expected to submit its registration documents to the Egyptian Financial Regulatory Authority (FRA) at the end of July or in early August.

The offering will allocate 85% of the offering to institutions in a private placement and 15% in a public offering for individuals.

Hazem Mousa, the company’s chief executive, disclosed earlier this month that the company intends to invest EGP 200m in two licenses for insurance activity, one for asset insurance and the other for life insurance, after receiving preliminary approval from the FRA.

The ownership structure of the company is divided between the Egyptian American Enterprise Fund (EAEF) as the largest shareholder with a 72% stake, and the management team, comprised of Hazem Mousa, Amr Lamy, and Hussam Abu Gendia, as well as other investors with a 28% stake.

Sarwa Capital has been active in a number of financial sectors, notably securitisation. The company has conducted securitisation worth EGP 10bn since 2005, along with some operations in consumer finance, leasing, mortgage, and insurance.