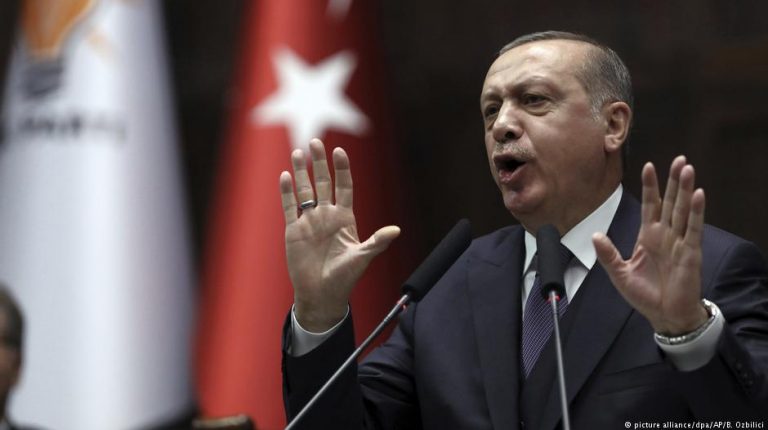 Turkish leader Erdogan has recently called on his compatriots to convert their dollar and euro savings into lira. But economist Per Hammarlund says many Turks will continue to save in dollars and other hard currencies.The Turkish currency has plunged by about 20 percent against the dollar since the start of the year. It pared back some of its losses following an emergency rate hike by the central bank on Wednesday.

Many point to growing concerns over Turkish debt and President Recep Tayyip Erdogan’s announced intention to exert more control over monetary policy as the reasons behind the plunge in the value of the lira.

The Turkish leader has also urged Turks to convert their dollar and euro savings into lira, in an effort to help shore up the currency against what he called “plots on foreign exchange.”

“My brothers who have dollars or euros under their pillow, go and invest your money in lira. We will foil this plot together,” Erdogan told an election rally in the eastern city of Erzurum on Saturday.

Ankara has long charged that the lira’s fall is part of a “conspiracy” by local and foreign financial market players who want to destabilize the Turkish economy.

Turkey is set to hold snap parliamentary and presidential elections on June 24.

In a DW interview, chief emerging-market economist at SEB AB in Stockholm, Per Hammarlund, spoke about the reasons behind the fall in the lira, Erdogan’s claims about a foreign “conspiracy” and call for Turks to change their foreign currency to the lira.

DW: The Turkish lira has recorded a steep fall in value against the US dollar in recent weeks. What are the reasons behind this drop?

The reliance on short-term funding makes the lira highly sensitive to sudden changes in global interest rates, in particular US rates, and changes in foreign investor risk appetite. However, the recent lira selloff received additional momentum from more specific factors, namely Turkey’s high inflation and the central bank’s apparent lack of commitment to bring it down any time soon.

Political pressure on Turkey’s central bank to loosen monetary policy had undermined the credibility of the bank. The selloff accelerated significantly when President Erdogan vowed to increase his influence over monetary policy and lower interest rates.

President Erdogan has blamed the lira’s fall on “conspiracy” by local and foreign finance market players who want to destabilize the Turkish economy. What is your take on these claims?

Media, analysts and politicians alike in countries around the world use words like “speculative attacks” when describing selling pressure on an asset or currency. The language is colorful and useful in diverting attention away from the underlying causes of investor speculative buying or selling. President Erdogan is not alone in having couched the struggle in nationalist terms. Investors see it more as a disciplining event, preventing politicians and central bankers from straying too far from prudent fiscal and monetary policy.

The Turkish leader has urged his compatriots to change their foreign currency to the lira to prop up the embattled currency. How do you view this call? How likely is it for Turkish citizens to comply with this request?

Some Turkish citizens will heed calls to buy the lira to support its value. However, unless fundamentals improve, i.e., unless the government takes measures to narrow the current account deficit and reduce inflation, buyers of the lira will lose money over the medium to long term.

Furthermore, a large share of Turkish citizens and corporations will continue to save in US dollars and other hard currencies. The ghost of lira weakness in the past will keep domestic savers and investors from converting all their hard currency assets into the lira.

If Erdogan increased his say in monetary policy after the elections and worked to lower interest rates, he may be successful for a short time in boosting growth. However, inevitably, market interest rates would rise pushing up the cost of financing the external deficit and slowing growth. Rate cuts now, unaccompanied by structural reforms, would lead to a credibility crisis and higher interest rates in the future.

How do you assess the current state of the Turkish economy? What do you think Erdogan’s government should do to maintain high economic growth so that it could secure his party’s reelection in the upcoming polls?

Erdogan’s government can do very little to change the economic outlook before the upcoming polls. The best way to improve sentiment and improve its election chances in such a short time would be to continue on the policy trajectory initiated with the rate hikes on May 23, namely to signal a commitment to central bank independence, a reduction of fiscal stimulus, and a willingness to patch up relations with the US. Markets would react very positively and lift Turkish assets, including the lira, which would boost overall sentiment and support his Justice and Development (AKP) party.

Per Hammarlund is chief emerging-market strategist at SEB AB in Stockholm.

The interview was conducted by Srinivas Mazumdaru.