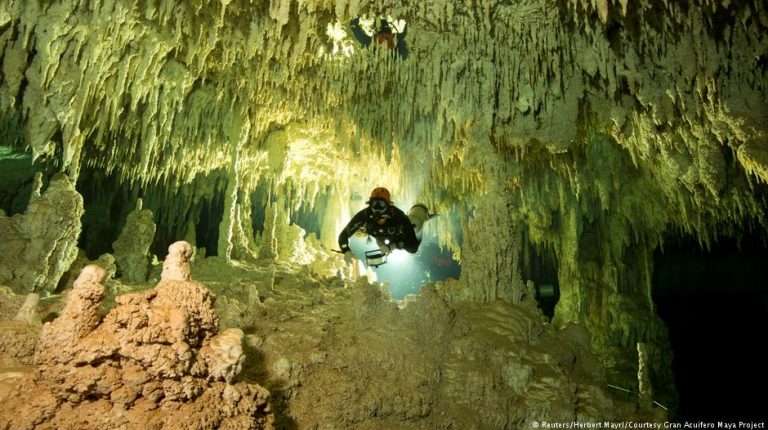 One woman has been exploring subaquatic caves for over 30 years. Her adventures have taken her deep beneath the Caribbean and inside Antarctic icebergs, and given her a long view of the damage we’re doing to our planet.Jill Heinerth has always felt at home under water – even when her life hung in the balance. She nearly drowned when she was a toddler but instead of feeling fear, she recalls fascination. "I remember the ripples on the bottom of the lake and the rainbows that the light made as it passed through the water," she says.

Heinerth grew up as a self-described "waterbaby."

"I swam. I played water polo. I did springboard diving. I paddled." She was also the kid who enjoyed hiding in kitchen cupboards and dark spaces – good practice for someone who would later specialize in exploring caves.

Now 53, Heinerth says she was inspired by celebrity diver Jacques Cousteau, who enthralled television audiences with his exploration of watery underworlds during the 1970s and 80s.

Having honed her diving in America's Great Lakes, Heinerth added underwater camerawork to skills, and got her first experience combining filmmaking and cave diving in Florida.

Three decades years later, she is one of the world's most decorated cave divers, a recipient of the Canadian Governor General's Polar Medal and member of the elite US Explorers Club, whose alumni include Polar explorer Roald Amundsen, aviator Charles Lindbergh, Sir Edmund Hillary and astronaut Neil Armstrong.

Illuminating the life of caves

Her latest role is as the Royal Canadian Geographic Society's first Explorer In Residence. And she's using it to shed light on aquatic worlds usually shrouded from view.

The Earth's surface is 70 percent water. And yet, Heinerth points out in talks to school children, politicians and think tanks, we know less about the oceans that we do about the surface of the moon, "and we know more about our oceans than we do about water-filled caves."

Those caves conceal strange lifeforms, as well as clues to climate change – past and present – and rising sea levels. Heinerth says we ignore them at risk to the health of the planet, and human communities. "Whatever we do on the surface of the Earth soaks into the ground into our drinking water supplies," she says.

Having explored water channels inside icebergs, mine shafts and caves that extend deep into the Earth's crust, Heinerth has intimate knowledge of where our water comes from. "These cave systems that I swim through come out of the ground in springs, fill rivers and creeks – the oceans are the very lungs of our planet," she explains.

Armed with a camera, Heinerth brings back captivating images to inspire protection of these water sources. "Caves to me are like swimming into a cathedral… the doorways where the light streams down from the surface … illuminating this gin-clear water. For me these are portals of discovery," she says, beaming.

Clues to our planet's past

Speaking to a group of school children, Heinerth explains how red sediment from the Sahara desert was found in a cave in the Bahamas. "So what's it doing in a cave on the opposite side of the Atlantic Ocean?" she asks.

The answer reveals secrets from our geological history. "These caves were created when the ocean levels were lower and the caves were dry. In this cave, it's been dry during three separate dry epochs."

Diving to depths of 120 meters (390 feet) off the coast of Bermuda, Heinerth and a team from America's National Oceanic and Atmosphere Administration discovered more.

"We found a continuous shelf along the Bermuda wall," which marks the former sea level, she explains. "That means the ocean levels were 120 meters lower than they are today. So we are living at a time of very high ocean sea levels – and it's getting higher."

Perhaps her most spectacular – and dangerous – dive took Heinerth inside an Antarctic iceberg. B15, as it is known, calved away from the Ross Ice Shelf in 2000. It was the biggest iceberg ever recorded – larger than Jamaica – earning it the nickname Godzilla.

The expedition saw Heinerth escape a collapsing glacier by a matter of moments. But it also revealed worlds no human had ever set eyes on before.

Life, but not as we know it

You might think that caverns within such a vast expanse of ice would be beyond the frontiers of life on Earth. But swimming through their pristine waters, Heinerth found that not to be the case.

"An entire garden of life was growing underneath the iceberg," she says. "There was all kinds of life swimming within the conduits within this iceberg. It was alive! This was all new."

Heinerth's adventures bring her face to face with some of the planet's more obscure creatures. She has a particular fondness for the remipede, a blind, venomous crustacean the size of a fingertip.

"We can find the identical animal in the fossil record more than 65 million years old – so what can that teach us about evolution and survival?"

She has also uncovered the remains of species that haven't fared so well, including an extinct ice-age bear, and an ancestor of the modern camel at the bottom of a water-filled cave in Mexico.

Heinerth takes a long view of life on our planet. And she's highly aware that through out own actions, humankind could be condemned to history, too.

"Coral reefs are bleaching, the sea ice is breaking up, species are migrating or becoming extinct," she warns. "We have got to make some pretty hard decisions to determine the future of our species."