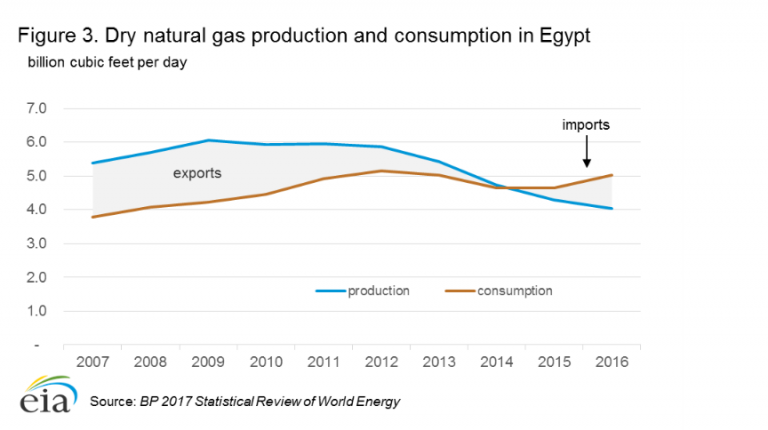 The US Energy Information Administration (EIA) said in a report that its expects Egypt’s substantial natural gas discoveries may potentially boost production and allow Egypt to become a net exporter again in the medium term.

The EIA stated that Egypt plays a central role in the transit of crude oil between the Gulf states and the Mediterranean region, pointing to how natural gas is exported at much smaller volumes because domestic energy needs have taken priority over trade.

Meanwhile, it is expected that the recent major natural gas discoveries could potentially lead to increasing exports in the medium term.

The EIA is a principal agency of the US Federal Statistical System responsible for collecting, analysing, and disseminating energy information to promote sound policymaking, efficient markets, and public understanding of energy and its interaction with the economy and the environment.

The report pointed out that Egypt became a net importer of natural gas in 2015 as a result of growing domestic demand and declining production levels.

“Despite new discoveries, Egypt’s dry natural gas production declined by 31% from 2012 to 2016, leading to net imports since 2015,” according to the report.

The EIA went on to say that to satisfy growing domestic demand, Egypt has had to divert its natural gas supply away from exports to the domestic market and to rely on liquefied natural gas (LNG) imports to address the shortfall in consumption.

On the other hand, the EIA stated that in 2016, Egypt exported approximately 26 bcf of LNG, most which was exported to the Asia Pacific (61%) and the Middle East (24%).

The report noted that the Egyptian government has fast tracked the development of the Zohr and Atoll fields and the West Nile Delta (WND) project, pointing out that these fields are expected to make substantial additions to the overall supply, filling the gap between production and consumption.

The Zohr field was discovered in August 2015 and labelled as the largest offshore natural gas field in the Mediterranean, it has estimated reserve of 30tn cubic feet and is currently producing 0.4 bcf/d.

At the beginning of this month, Minister of Petroleum Tarek El-Molla announced that Egypt’s natural gas production rose to 5.7 bcf/d day in 2016.

The report said that Egypt is the largest non-OPEC oil producer in Africa and the third-largest dry natural gas producer on the continent after Nigeria and Algeria, as in 2017, Egypt’s petroleum and other liquids production averaged 666,000 barrels per day (bpd). Most of the crude oil production in Egypt comes from the Western Desert and Gulf of Suez, and the remainder is produced in the Eastern Desert, Sinai, Mediterranean Sea, Nile Delta, and Upper Egypt.

Concerning the challenges, the report stated that one of Egypt’s main challenges is to satisfy increasing domestic oil demand amid falling production and that Egypt’s oil consumption currently outpaces its oil production.

“Total crude oil consumption increased by approximately 16% since 2007, averaging 802,000 bpd in 2017, and it is expected to continue growing, even when accounting for the phasing out of subsidies,” according to the EIA.

In 2014, the Egyptian government began to implement several reforms in the field of energy, including reducing fuel subsidies over several stages. Egypt is set to fully lift energy subsidies by the end of 2019, the government previously announced.

The measures have encouraged foreign oil companies operating in Egypt to accelerate the exploration of Egyptian gas and oil.

In that regard, the report revealed that according to Business Monitor International Research, the increase in fuel prices due to reductions in energy subsidies decreased consumption growth to 3% in 2015 from an average of 4% in 2012 through 2014.

Although a subsequent energy subsidy reduction, coupled with the value added tax increasing to 14% in 2017, resulted in significant increases in diesel and petrol prices and may dampen consumption growth in the near term, energy consumption is expected to continue growing in the long term, given growth in the transportation sector, a growing population, and an improving economy.