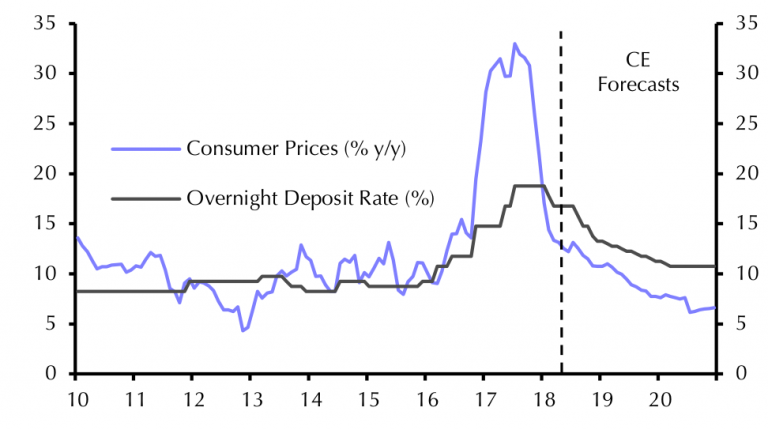 The flotation of the Egyptian pound in November 2016 took its toll on Egypt’s economy. Yet, as fiscal consolidation slows and inflation and interest rates minimise, growth should remain robust over the next two years, according to Capital Economics’ MENA Economics Update report issued on Monday.

The report forecasted a 5.3-5.5% growth rate in the period between 2018-20, surpassing the performance of the Egyptian economy since 2011.

In 2017, the Egyptian economy witnessed its best performance in five years, growing 5% year-over-year. The report cites various drivers for the expected growth over the coming years.

These include a slower pace of fiscal consolidation. Although public finances remain dire, the authorities have made good progress reining in the budget deficit.

According to the IMF, the government is now on track to record a primary fiscal surplus for the first time in a decade. As the public debt-to-GDP ratio begins to drop, there should be room for the authorities to ease austerity measures.

Moreover, inflation and interest rates continue to fall further, as the headline inflation rate has already nosedived from a 30-year high of 33.0% y-o-y in July 2017 to 13.1% y-o-y in April, which is just slightly above the central bank’s target for the end of 2018.

However, the oil price hike, which took place recently, has stoked fears that inflation will rise again.

Consequently, the government will need to increase administered prices by more than the previously planned amount in order to meet IMF-mandated fiscal targets, the report indicated.

Capital Economics believes that a 60% hike in fuel prices must take place in July to keep the subsidy reform programme on track, while electricity prices would be increased by as much as 55%.

As a result, a slight bump in inflation is expected in July, yet the research group downplays its long-term effect, as the report indicates that the trend will be towards weaker price pressures over the coming years.

Accordingly, lower inflation will ease the squeeze on households’ real incomes and allow the Central Bank of Egypt to resume its monetary easing cycle. The research firm estimated that interest rates will be lowered by a further 600 basis points (bps) by the end of 2020, boosting credit growth and investment.

Furthermore, Egyptian exports are expected to drive growth. Since the devaluation, the report indicates that Egypt’s real effective exchange rate—that is, its trade-weighted exchange rate deflated by inflation differentials—has fallen sharply and it is now around 25% below its long-run average.

As a result, Egyptian goods are now more competitive on international markets and consumption has started to shift from imports to domestically-produced goods.

Exports will also receive a boost as production from the mega Zohr gas field comes on stream. Gas output will almost double over the next few years, which will directly boost GDP by around 2.8%.

The report concludes that bolder reforms will be needed to raise the country’s perilously low investment rate and sustain strong economic growth.