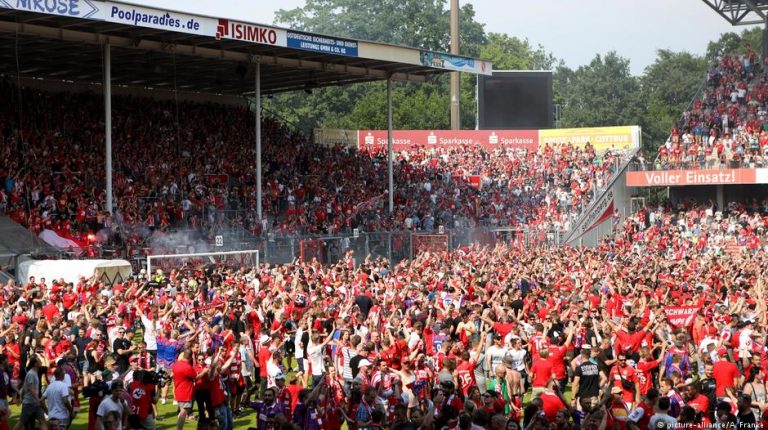 Energie Cottbus have made headlines due to the behavior of some of their fans in recent years, including following the club’s promotion to the third division. But other supporters are trying to change the club’s image.Sunday was a day of celebration in the eastern German city of Cottbus as local side FC Energie Cottbus finally returned to professional football after two years in the fourth-tier Regional League North-East.

Over 20,000 supporters turned the city red, packing into the Stadion der Freundschaft to see a goalless draw against underdogs SC Weiche Flensburg in the promotion playoff – but a 3-2 victory from the first leg ensured promotion to the 3. Liga.

But, not for the first time in the past couple of seasons, the celebrations were marred by controversial incidents off the pitch.

Among the fans who streamed onto the field at fulltime was one man sporting neo-Nazi tattoos while, back at the city’s main square, other fans were photographed posing in Ku Klux Klan-style hoods with a banner featuring a Celtic cross and the message: “Aufstieg des Bösen” – “The rise of evil,” the title of a 2003 film documenting the rise to power of Adolf Hitler.

Cottbus’ players and coach, Claus-Dieter Wollitz, also caused controversy after jokingly singing anti-gypsy chants at each other during the post-match celebrations. Wollitz later apologized for his “faux-pas,” insisting to local paper Lausitzer Rundschau that “we didn’t intend to insult or discriminate against anybody” and adding that “such chants have no place in public.”

Football grounds often serve to reflect a region’s socio-political landscape and, like many eastern German cities, Cottbus has struggled economically since re-unification.

Unemployment in the city is at 7.6 per cent (compared to the national average of 5.3%) and the right-wing populist Alternative for Germany (AfD) party became the second-largest party in the region in last year’s federal elections with 25.3% of the vote.

– Read more: German city of Cottbus grapples with violence between locals and refugees

At FC Energie, the fan scene was long dominated by the now-banned right-wing group “Inferno Cottbus,” who prompted outrage when they unfurled a banner at a game against Dynamo Dresden 2005, taunting their rivals as “Jews.”

In 2017, a section of Cottbus supporters made headlines when they directed Nazi salutes and anti-Semitic chants at fans of rivals SV Babelsberg 03, leading to a long-running scandal.

“Football offers a large stage and attracts a lot of media attention,” explained Bianca, an officially elected Cottbus fan representative, in a discussion with DW last month. “That gives these people a good platform when they want present themselves in whatever way they want.”

Is the club doing enough?

But coach Wollitz’s unguarded “gypsy” comments have only served to further suggestions that discriminatory attitudes are going unchallenged within the club, and that not enough is being done to combat the problem of right-wing extremism among a section of the support.

“The club recognizes the problem and has held several press conferences on the subject,” said Bianca. “An integration and tolerance position has been created and we as fan representatives are working with the club and with the Fan Project. The idea is that people talk to each other more so that we don’t have these political discussions.

“Since the events [in Babelsberg], the entire media has focused on Cottbus and tried to find skeletons in our closet. That hurt a bit, because I don’t think that we’re a neo-Nazi club.”

Following the incidents in Babelsberg, Cottbus supporters were banned from attending this season’s league away fixture against the Potsdam side. But 1,650 travelled to the regional cup final between the two teams in May, where a new group of fans organized in the Facebook group “Energie Fans against Nazis” unveiled a banner reading: “Always in the majority!”

“We created this group because we will no longer accept Energie fans being generalized and stigmatized,” they said when the Facebook page was launched in October 2017. It now has almost 1,200 “likes.”

However the banner was quickly torn down by a Cottbus fan sporting a t-shirt with a right-wing “black sun” symbol, as witnessed by German hooliganism expert and author Robert Claus. A new version of the banner appeared at Sunday’s game against Flensburg, but was also removed.

A new statement read: “Really, we want to celebrate the incredible performance of our team this season … but there’s bad news once again. Yet again, Nazis are abusing our club.”

The Fanszene Cottbus, a body of hardcore supporters including the Cottbus ultra groups, said in a statement that “banners which serve only to cause a political split cannot be tolerated,” although they did condemn the KKK hoods and banner on the main square as “entirely inappropriate and mindless.”

The club itself also distanced itself from the those responsible, calling the incident “inhuman, repulsive and in no way acceptable” and promising to issue lifetime bans to anybody identified.