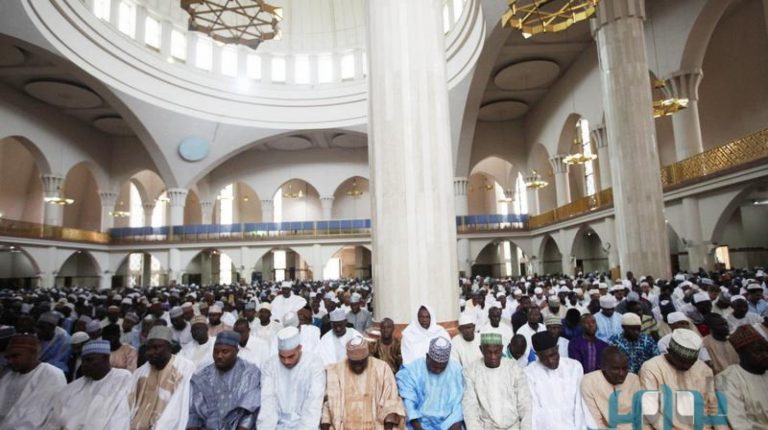 About half of Nigeria’s population is Muslim. Ramadan is the ninth month of the Islamic calendar and is officially observed in Nigeria when the Ramadan crescent is sighted by the Nigerians themselves, as they do not start the fasting according to any other country’s observation.

Once the moon-sighting is confirmed, a spirit of joy spreads among the people and many start wandering in the streets, beating drums and exchanging congratulations for the holy month.

The Nigerian women go out to purchase new kitchen utensils and other supplies used in preparing special banquets throughout the holy month.

It is common among the Muslims of Nigeria that neighbouring families have iftar (meal to break the fast) together; they prepare large banquets close to mosques so that the male worshippers sit together to eat their breakfast after performing the Maghrib (sunset) prayer, while the women gather in other places allocated for them to eat.

As for the gifts for married couples, they should be granted by the wife’s mother-in-law, sister-in-law, or other women, as they should never be given by the man. The gifts should also be wrapped.

High-fructose corn syrup is very common in Nigeria. The Muslims there usually drink the corn syrup to break their fast before they go to perform the Maghrib prayer. When they return home, they eat their meal, which usually includes meat, rice, and potatoes, and then they drink tea.

One of the most popular Ramadan dishes in Nigeria is suya. It is grilled meat coated with ground chili pepper, peanut powder, and other local spices. It is prepared barbecue-style on a stick. This is one of the most famous Nigerian delicacies and can easily be found all over the country.

Nigerian cuisine consists of dishes or food items from about 250 ethnic groups that comprise the country. Like other West African cuisines, it uses spices and herbs with palm or groundnut oil to create deeply flavoured sauces and soups. Northern Nigeria is famous for beans, cereals, millet, maize, and rice, while the south is known for tubers such as cassava, and boiled or fried potatoes.

After iftar, men and women go to the mosques to perform Isha (night) prayer and Tarawih prayer. They also attend sermons and return to their homes in the middle of the night.

Nigerian Muslims hold special prayers on each night of Ramadan and they gather in mosques to read about the virtues of the holy month.

They also celebrate “Laylat Al Qadr”, which is considered the holiest night of the year for Muslims and is traditionally celebrated there on 27 Ramadan. It is known as the “Night of Power”.

The Nigerians have many beautiful habits in Ramadan, notably visiting relatives and friends frequently after the evening prayer. Women are allowed to go to mosques and attend sermons so that they can learn the teachings of Islam.

The “mesaharaty”, or dawn awakener, is not common in Nigeria; instead they have the so-called “awakening bands”. They are groups of young people playing music to wake the Muslims up for suhoor (the last meal before fasting).

In the last nights of Ramadan, everyone goes to markets to buy new clothes in preparation for Eid Al-Fitr.