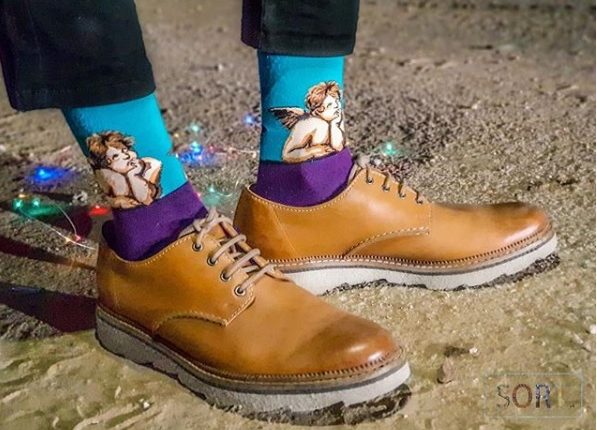 In a world ruled by black suits and stiff shirts, standing out at a working space seems to be tricky. While trends constantly change, the formal black suit barely notices the fast leaps of fashion. In a room full of kings, presidents, and ministers, he is often noticed for his interesting choice of accessories.

His words are always eloquent and precise; nonetheless, it is his choice of socks that dominate social media feeds. Justin Trudeau, the prime minister of Canada, has been credited as an advocate of extraordinary socks that cleverly manage to break the monotony of his politically correct attire.

While all fashion designers and brands are currently on a steady pace to produce everything locally in order to support local craftsmanship and celebrate new ranges of quality, menswear remains to be an unexplored territory. With only few specialised designers, many accessory items remain completely foreign.

Inspired by his personal interest in extraordinary socks and the recent global interest in the unexpected designs—similar to Trudeau’s—Ahmed El-Hussainy saw a market need and jumped to fulfil it. His brand Sort is specialised in none other than colourful, artistic and well-detailed socks that are set to change the rules of formal Sundays.

According to him, socks have always been his favourite obsession as he used to keep up with his father’s growing collection. After years of borrowing his father’s outstanding finds, El-Hussainy did not only plan to further expand his; instead, he decided to start the country’s first brand for designer socks.

The brand currently depends on imported products in preparation for locally-made collections. According to the founder, his early collections aim to establish a strong base and market for his out-of-the-box aesthetic. Meanwhile, he is already looking for the needed materials and workforce in Egypt in order to further expand his concept in the country.

The debut collection features a number of iconic paintings such as Van Gogh’s The Starry Night, Leonardo da Vinci’s Mona Lisa, Gustav Klimt’s The Kiss, Sandro Botticelli’s the Birth of Venus, Van Gogh’s the Scream, and Raphael’s angels from the Sistine Madonna, among others.

Aside from the concrete universal artistic references, the brand also offers a wide range of different colourful renditions of these well-celebrated masterpieces, making artistic statement an everyday routine.