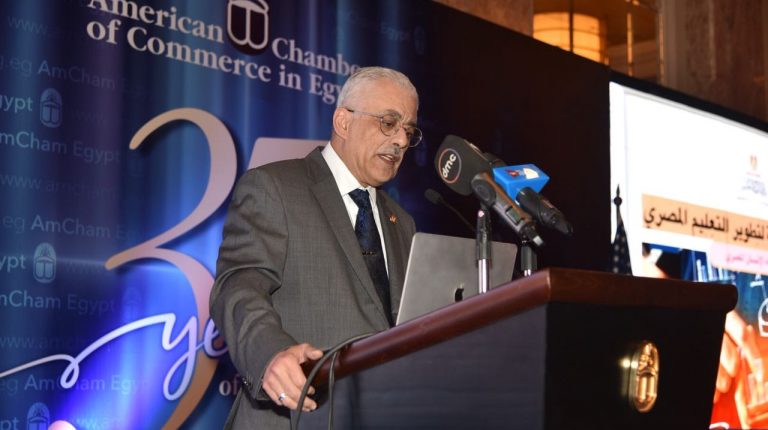 Minister of Education Tarek Shawky affirmed that Egypt will complete the development process for the new educational system, which relies on enhancing students’ innovation capabilities, by 2026.

He added that the ministry will stop releasing textbooks in the new educational system that depends on technology and digital curricula. He noted that that move will save about EGP 3bn in the general budget, easing the financial burden on the ministry, and he pointed out that Egyptian students eventually resort to third-party textbooks.

His remarks came during the American Chamber of Commerce in Egypt (AmCham)’s annual general assembly meeting held on Monday, in the presence of about 500 members and businesspersons. Shawky said that the Egyptian Knowledge Bank will provide the required digital books to students for free, noting that they can also get any digital tutoring books for free.

He pointed out that the printing houses that supply textbooks to the ministry will be granted the chance to adjust their situation in accordance with the requirements of the new educational system. Shawky asserted that the ministry had to change the traditional educational system due to global changes and developments that require the qualification of students to meet the market’s needs.

Shawky stressed that the new exam system will be electronic to eliminate the phenomenon of cheating and save about EGP 1.3bn spent each year to secure the examinations process.

The minister announced that next academic year, internet services, fixed-line or wireless, will be provided to all schools in Egypt, including those in remote areas. External funds will be used for the plan. The ministry will also grant free tablets to students nationwide, which are required for the new educational system.

The minister revealed that new technology-based schools will start in Egypt by September, adding that the new educational system will be available in Arabic, German, French, and English.