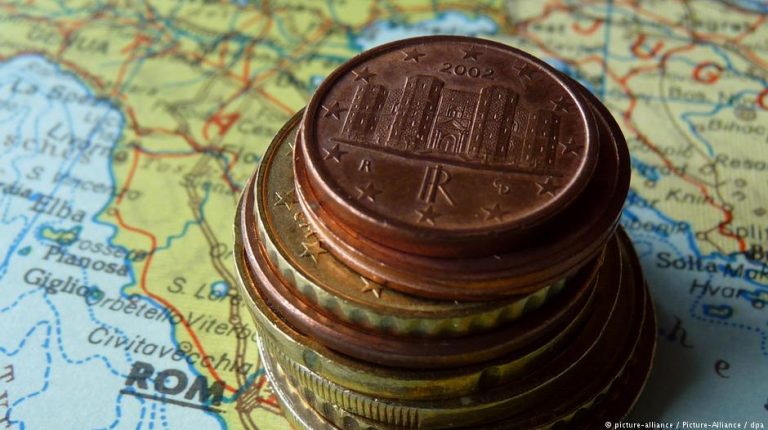 Political turmoil reigns again in Italy, and the likelihood of an anti-euro government taking charge is stronger than ever. For the EU, an Italian euro-exit is unthinkable and would make Brexit look like a picnic.Even during the darkest days of the Greek debt crisis in 2011 and 2012, the murmurs and whispers about the risks posed by the Italian economy often seemed to carry an extra edge of fear that set it apart from its Hellenic counterparts. However bad things get around the Parthenon, they could get a hell of a lot worse around the Colosseum — it was a common refrain.

Despite plenty of economic pain across Europe in the years that followed, some of it severe, the house did not collapse; Greece stayed in the eurozone and the European Central Bank vowed to do “whatever it takes” to save the euro. The Italian threat remained largely the stuff of hypothetical nightmares.

Yet the source of the long-standing fears over an Italian financial crisis has never gone away. The worries came surging back to the surface in recent days when a political crisis erupted over government formation talks in the country.The populist Five Star Movement (M5S) and Lega parties wanted an anti-euro finance minister installed. The Italian president would not have it, and the incoming government collapsed before it had even come to power.

New elections look a certainty now but political instability is the norm in the country — this was the 67th Italian government in the last 70 years, after all. Yet the possibility that Italy will soon be run by parties in favor of withdrawing from the euro is stronger than ever, and that is sending shivers down spines in Brussels.

But what would a fully-fledged Italian financial crisis look like and what could it mean for the eurozone? Why is Italy so important?

Too big to fail

The short answer is that Italy matters so much because of its size. It is the third-largest economy in the eurozone and in the top ten worldwide, when measured by nominal gross domestic product (GDP). Its economy is utterly rooted within the EU and eurozone, with close to two-thirds of all its trade conducted with its European neighbours.

The longer answer relates to Italian debt. The country owes €2.3 trillion ($2.67 trillion) in sovereign debt to both public and private lenders, which is equal to 132 percent of its GDP. That’s the fifth highest debt-GDP ratio in the world and the second highest in the eurozone, behind Greece on 180 percent.

The fate of the banking sector in the eurozone is therefore intrinsically tied up with the fate of the Italian economy. European banks hold multiple billions of euros worth of Italian government debt while the Italian banks UniCredit and Intesa Sanpaolo are among the largest in the EU in terms of total assets.

As we saw in 2007 and 2008 when the global financial crisis struck, when banks collapse, that fire is extremely difficult to stop from spreading into practically every corner of the financial system. And that leads us to the key of why the worries over Italy run so deep.

The so-called sovereign bank “doom loop” is the financial phenomenon, particularly evident within the EU, whereby banks and their domestic governments are so interconnected that when a country’s indebtedness leads to fears over its credit worthiness — as happened so spectacularly to Greece and Ireland during the worst of the financial crisis — that country’s banking system becomes infected and contagion spreads.

In the immediate wake of the political crisis earlier this week, the value of Italian government debt fell dramatically. Italy’s largest bank, UniCredit, lost 5.5 percent of its share value on Tuesday alone.

Ignazio Visco, the governor of the Bank of Italy, issued a stark warning about the risks of Italy’s push towards populism causing economic havoc.

“We cannot disregard constitutional constraints: protecting savings, balancing the accounts and respecting the treaties,” he said. “Above all, we must not forget that we are only ever a few steps away from the very serious risk of losing the irreplaceable asset of trust.”

Speaking about the unspeakable

While the political developments will continue to fluctuate on a daily basis over the coming days and weeks, there appears to be no immediate short-term threat to the eurozone from the latest Italian developments other than the movement of a few digits here and there on the markets.

Many Italians would argue that the country has been in a form of financial crisis for decades already, given the country’s stubbornly high rate of unemployment (around 11 percent), level of indebtedness and multitude of structural issues which have left the country with notoriously sluggish growth for many years.

Yet what much of the doomsday talk ultimately hinges on is the possibility of the country leaving the euro and defaulting on billions and billions of public debt. Were Italy to leave the euro in a disorderly fashion (a euro-exit could only ever be disorderly) it could prompt the biggest default in economic history.

The consequences of that for the European banking and economic system would be enormous. The eurozone would immediately face an existential crisis; the banking system across the bloc would likely collapse and the consequences would be felt in practically every household from Donegal to Dubrovnik.

At the moment, this scenario remains the stuff of theoretical nightmares in corridors in Berlin and Brussels, exactly where it has been lurking for close to a decade.

If there is a new Italian election and voters turn away from the populists, the dark mutterings may retreat further from earshot. But if the hands of Lega and the Five Star Movement are strengthened and anti-euro policies are given fresh impetus at the heart of Italian government, Italy could become the defining issue for Europe it has long since threatened to be.