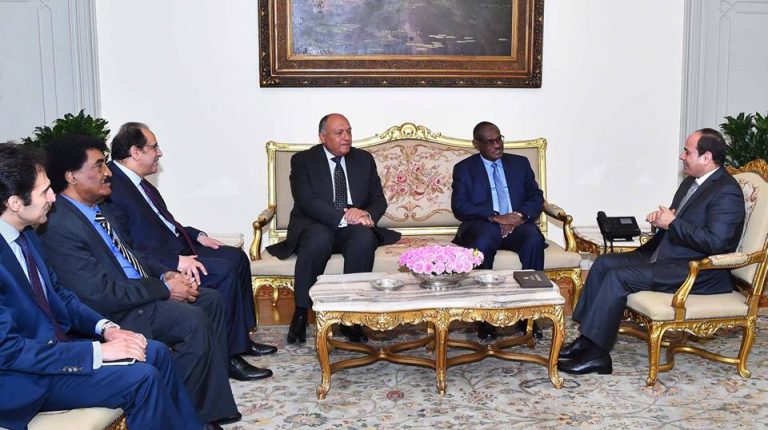 Egypt’s Minister of Foreign Affairs Sameh Shoukry discussed on Tuesday bilateral relations between Egypt and Sudan with his Sudanese counterpart, Dardiri Mohamed Ahmed, during his first visit to Egypt after being appointed earlier this month.

Dardiri also met with President Abdel Fattah Al-Sisi, who stressed the importance of relations between Egypt and Sudan. Al-Sisi is set to meet with Sudanese President Omar Al-Bashir in October.

According to a statement from Foreign Ministry spokesperson Ahmed Abou Zaid, the meeting came in light of the political consultations at the ministerial level to discuss the course of relations between the two countries and several regional issues of mutual interest.

During the meeting, Shoukry reviewed the latest positive developments in bilateral relations, such as the electrical interconnection project between the two countries, and cooperation on airport safety and management, as well as finding solutions to the challenges facing the Nile Valley Commission for River Navigation, which links Wadi Halfa in Sudan and Aswan in Egypt.

They also agreed on resuming delegations and diplomatic and popular diplomacy between the two sides, and halting the media spat, according to the statement.

The meeting also addressed a number of topics in order to boost cooperation, such as reaching a solution to the Sudanese embargo on Egyptian agricultural products, which was imposed in May 2017, as well as activating the Egyptian-Sudanese corporation for agricultural integration and settling the debts of EgyptAir to Sudan.

For his part, the Sudanese minister said he is looking forward to boosting cooperation between his country and Egypt in all fields. He also expressed a desire the that for new Sudanese diplomats to receive training at the diplomatic institute of the Egyptian Ministry of Foreign Affairs.

Regarding the Grand Ethiopian Renaissance Dam (GERD), Shoukry said that the two parties share the same views on it, while Dardiri said, “we are willing to pass all the remaining problems regarding the GERD at the tripartite level between Egypt, Sudan, and Ethiopia.”

Abou Zaid added that the meeting addressed the developments of the regional situation in Libya and South Sudan, and the security of the Red Sea and the Horn of Africa. The two ministers also agreed on holding the upcoming meeting of ministers of foreign affairs and heads of the intelligence agencies of Egypt and Sudan within the coming two months.