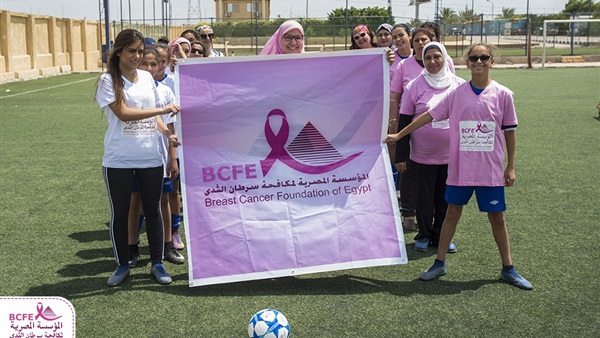 The Breast Cancer Foundation of Egypt (BCFE) organised and held a football match for breast cancer patients for the first time in Egypt and the world.

Mohammed Shaalan, professor of oncology and head of the BCFE, said that the prevailing impression in society is always negative towards cancer victims, saying cancer is viewed as a fatal disease that destroys the patient’s social life and morale.

“Here comes the role of the BCFE in changing societal concepts and culture about the disease, and even developing community thinking towards interaction with the issue, contributing to spreading more knowledge about the disease and early detection methods, and integrating with breast cancer fighters in activities that benefit the morale and spirit on both sides,” he continued.

For her part, Ghada Khalafallah, media and external relations director at BCFE, said that the idea of the match stemmed from Egypt’s participation in the World Cup.

On the other hand, Mohamed Mohsen, co-founder of AIMZ Women’s Football Academy, said that the academy always encourages girls and women to play football.

He pointed out that women’s football does not receive enough attention in Egypt, noting that there are not many places for women to practice the sport in the country.

“We are delighted that AMIZ’s football players met with breast cancer fighters to prove that women are capable and have a strong will to do anything,” Mohsen said.