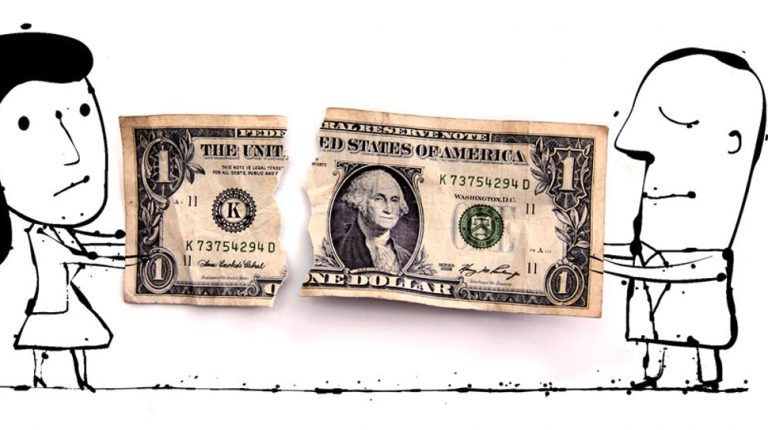 There has been significant attention by policymakers and civil society paid to the rights and conditions of women and girls in the Middle East and North Africa (MENA) in recent years. In spite of that focus, there remain challenges in gender equality in the MENA region.

Although Egypt in particular has made considerable legislative advances with regard to women’s rights in recent years, as well as efforts to reduce such practices as early marriage, female genital mutilation, and sexual harassment, it still ranks low on gender equality, according to several international measures.

The findings of IMAGES MENA reflect this persistent inequality.

The International Men and Gender Equality Survey – Middle East and North Africa (IMAGES MENA) is the first study of its kind in the MENA region to take a wide-angle, comparative lens to the lives of men—as sons and husbands and fathers, at home and at work, in public and private life—to better understand how they see their positions as men, and their attitudes and actions toward gender equality.

The study was funded by the Swedish International Development Cooperation Agency (Sida), under the leadership of UN Women and under the auspices of the National Council for Women in Egypt (NCW).

The survey was conducted in four countries: Egypt, Lebanon, Morocco, and Palestine.

According to the study, a majority of the men interviewed in the four countries generally support a wide array of inequitable, traditional attitudes. However, a sizeable minority—a quarter or more of the men surveyed in every country—showed support for at least some dimensions of women’s equality and empowerment.

Meanwhile, the study revealed that in Egypt in particular, men and to a lesser extend women hold inequitable views about gender equality.

Furthermore, the Majority of Egyptians have patriarchal attitudes towards male and female rights and relations, wealthier men, those with higher education, and those living in urban areas tend to hold more equitable views, as do more educated, younger, single, urban women. Men who, as children, saw their fathers involved in housework also score higher on the gender equitable scale. 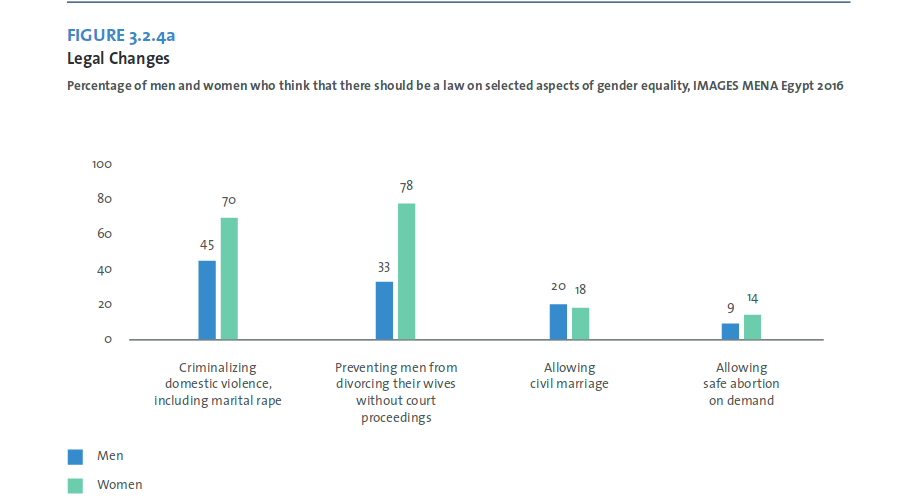 The study stated that the majority of men interviewed in the four countries support mostly inequitable views when it comes to women’s roles, revealing that between two-thirds and three-quarters of men support the notion that a woman’s most important role is to take care for the household.

Generally, “the MENA region has the lowest rate of women’s economic participation in the world,” according to the study. “Three-quarters or more of men in the four countries and women at nearly the same rates, support the priority of men’s access to jobs over women’s.”

Particularly, in Egypt, the study stated that men are resistant to women working outside the home, and to their participation in aspects of political and public life.

Moreover, it stated that men in Egypt strongly support the idea that they should be the primary breadwinners; almost 80% of men are the main breadwinners for their family, while more than half of men reported frequently feeling stressed due to lack of work and being worried about not being able to meet their family’s daily needs.

The study noted also that more than 60% of male respondents worried about their ability to provide their families with daily necessities, among other concerns.

“However, two-thirds or more of men surveyed in Egypt support educational equality for boys and girls and equal pay for equal work and reported that they would be willing to work with female colleagues should women gain access to the workplace,” according to the study.

Household decision-making: Who is in control?

Consistently, women and men in all four countries reported that men make most of the major household decisions, although, on the whole, men reported greater say in such matters than women acknowledged. Compared with men, women consistently reported less control over their decision to marry the person they wanted, as fathers had the final say.

Unsurprisingly, men expect to control their wives’ personal freedoms, from what they wear and where they go to when the couple has sex. Two-thirds to 90% of men reported exercising these various forms of control, with women affirming that their husbands sought to control them in these ways.

The findings in Egypt are not different, as in Egypt, men make most of the household decisions.

“These patterns begin in childhood, with men and women often following the models established by their parents. Both men and women reported having more power and control in household decision-making than the other gender acknowledges,” the study said.

When it comes to housework and childcare, attitudes translate into action—or the lack thereof. The vast majority of the daily care of children and other household tasks are carried out by women, in all four countries. Just one-tenth to one-third of men reported having recently carried out a more conventionally female task in their home, such as preparing food, cleaning, or bathing children.

Meanwhile, in Egypt, women continue to carry the load when it comes to housework.

Furthermore, “in spite of the gap in who does the daily caregiving in Egypt, men would like to do more, while more than 60% of men said they spend too little time with their children because of work, nearly half also participate in some aspects of childcare,” according to the study.

It also stated that almost half of men and women in Egypt reported being in favour of paid parental leave for fathers.

As other studies have shown, experiences of gender-based violence, particularly intimate partner violence and sexual harassment in the streets, are common for women across the region.

“All told, across the four countries, around 10-45% of ever-married men reported ever having used physical violence against a female partner, with approximately equal numbers of women affirming they had experienced this violence,” according to the study.

The study said that in all four countries, half to three-quarters of the men surveyed reported having experienced physical violence in their homes growing up.

Furthermore, in Egypt, men and women experienced high rates of violence growing up. Almost one-third of men were beaten as children at home.

Concerning the different types of gender-based violence, the study revealed high support for female genital mutilation (FGM) in Egypt, in which more than 70% of men, and more than half of women, approve of the practice.

Meanwhile, more than two-thirds of men and women said the decision to circumcise their daughters is made jointly between husbands and wives.

“More than 60% of men reported ever having sexually harassed a woman or girl, and a similar proportion of women reported such unwanted attention. More women than men blame the victim for having been harassed,” the study revealed.

On the other hand, “in spite of attitudes and practices favouring male privilege, between one-quarter and one-third of men said they support selected aspects of equality for women,” according to the study. 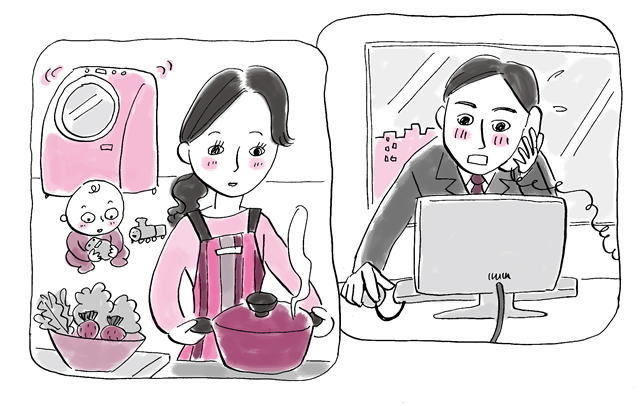 Recommendations that correspond to the list of the aforementioned findings

The study made some recommendations to successfully reach full equality, including engaging key sources of social influence to change social norms that uphold inequitable masculinities, engaging men in supporting a comprehensive policy agenda for women’s rights, changing the way boys and girls are socialised from the home to schools, breaking cycles of gender-based violence by implementing and scaling up evidence-based prevention, promoting men’s caregiving and women’s full involvement in the workplace, involving men in fighting FGM, conducting more researches on masculinities, and conducting more advocacy campaigns to combat violence against women.

Mohamed Naciri, regional director for the Arab states at UN Women said that the study was a seed waiting to be planted.

He explained that working toward the empowerment of women in a region that is not always associated with gender equality has been one of the greatest blessings and honours of his life.

“The study results have shown us things we already knew but for which we did not have evidence—for example, that among many of the male respondents there is a sense of superiority, a conviction that they are entitled to protect and control their female family members,” he said.

“For our work at UN Women, this report is an incredibly important tool in our programming, in our lobbying, and in our efforts to work with member states, civil society, and communities,” he added.

A year in the US: Social turmoil, violence and historic change