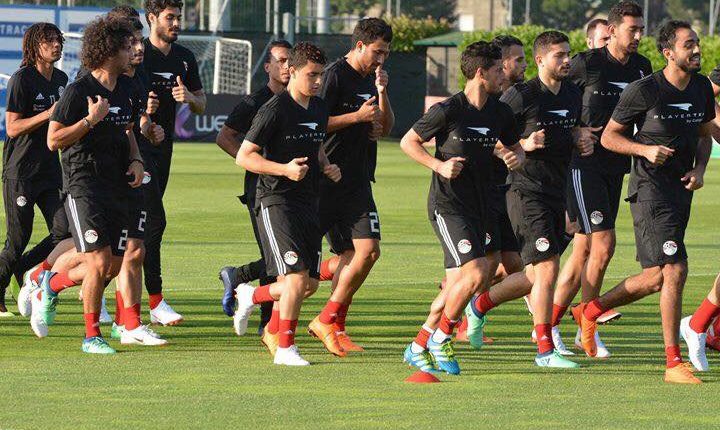 The Egyptian national football team, led by Argentinian manager Hector Cuper, will complete on Thursday its preparations for Friday’s friendly against Colombia as part of the team’s preparations for the 2018 World Cup in Russia, from 14 June to 15 July.
Cuper ordered the players to stop talking about Liverpool star Mohamed Salah’s injury, as the players became busy with the circulated news about the player’s condition since he was injured on Saturday in the UEFA Champions League final.
The Egyptian team’s coaching staff prepared Al-Raed’s midfielder Mahmoud Abdel Razek Fadlallah, commonly known as Shikabala, and Greek Atromitos’s star Amr Warda to replace Salah after Liverpool announced that the winger may take three to four weeks to recover from a shoulder injury he suffered in the Champions League final against Real Madrid.
Salah’s injury has confused the Egyptian national team’s coaching staff, as he was supposed to be the torchbearer of his nation’s hopes at the upcoming World Cup. Cuper also wanted to play Egypt’s last friendly matches against Colombia and Belgium before the World Cup with the team’s main squad, but instead he had to find replacements for Salah for the upcoming games. All the nations qualified to the 2018 World Cup have to submit their final 23-player squad to FIFA by 4 June. The World Cup begins on 14 June, with the host nation Russia taking on Saudi Arabia in the first Group A match. Egypt’s first match, against Uruguay, will take place on the second day of the tournament.
Sources from the national team told Daily News Egypt that the coaching staff was considering adding Al Ahly’s star Walid Suleiman to the team’s squad but they finally changed their minds. The coaching staff said they already have two or three players who are capable of replacing Salah, such as Shikabala, Ramadan Sobhy, and Warda, the sources said.
The coaching staff justified their decision due to lack of time to try new players in Salah’s position, especially after the medical staff following Salah said that he will take a maximum of four weeks to recover from injury.

Cuper’s tactics in recent games always relied on Salah, so the team may miss the efforts of its best player in its first World Cup match against Uruguay. However, the Pharaohs, who are currently holding their training camp in Italy, hope that Salah can recover fast enough to catch the first game.
Cuper is still deciding between Al-Taawoun’s goalkeeper Essam El-Hadary and Al Ahly’s goalkeeper Mohamed El-Shenawy to be Egypt’s goalkeeper against Colombia.
Al Ahly’s goalkeeper Sherif Ekramy played that role in the team’s last 1-1 draw against Kuwait last Friday. Ekramy did not put up a good performance in the game.
The training sessions of Egypt’s goalkeepers became intense recently as El-Hadary and El-Shenawy compete to win a place in the national team’s squad in the coming World Cup.
Meanwhile, Cuper agreed with the team’s medical staff to develop a special diet for the players who will be fasting for Ramadan during the training camp in Italy to avoid fatigue. The fasting period in Ramadan lasts for up to 17 hours a day.
On the other hand, Cuper is expected to play his next match against Colombia with the main squad, which will hopefully play the World Cup’s first game against Uruguay scheduled for 15 June.
The expected squad includes Mohamed Abdel-Shafy at left-back with the two West Bromwich Albion defenders Ali Gabr and Ahmed Hegazi at centre-back and the versatile Ahmed Fathy at right-back. In the midfield, Mohamed Elneny and Tarek Hamed are expected to sit deep. Going forward, Cuper prefers three attacking midfielders and one up front. Mahmoud “Trézéguet” Hassan, Abdallah El Said, Marawan Mohsen, and Mahmoud Kahraba will make up that plan.
On the other hand, the Belgian team rejected Egypt’s request to delay its clash with the Pharaohs scheduled for 6 June for marketing reasons.