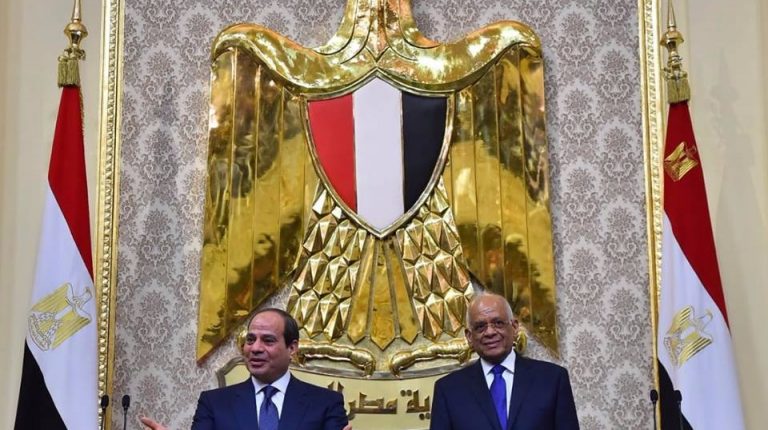 President Abdel Fattah Al-Sisi was sworn in before the Egyptian Parliament on Saturday to begin his second term as president for another four years.

The inauguration took place amid a heavy security presence, as Al-Sisi arrived to the parliament building in Downtown Cairo and was greeted by Parliament Speaker Ali Abdel Aal and other state officials.

Abdel Aal started the session by saying, “the people have defied the calls for boycotts. This started first with the MPs who embraced the president, while second are the people who chose you believing in a better future after the president sided with them on 30 June.”

After that, Al-Sisi recited the constitutional oath of office, receiving a standing ovation from the members of parliament, who were all present—a rare incident, as MPs are often criticised for not attending legislative sessions—to the extent that one of the MPs recited a poem of praise to Al-Sisi, while another yelled that had it not been for Al-Sisi, Egyptians would have been refugees.

The president followed the inauguration with a speech, in which he called on Egyptians to “face challenges and carry on the fight of existence and building and hold on to our social contract.”

Al-Sisi asserted, “Egypt can fit all of us [Egyptians] with all of our diversities…believing that differences are a power that is added to us and to our nation.” However, he said that the only exception to this acceptance will be those who carry arms against people.

He also vowed to give due care to health, education, and culture, via major projects, for the survival of society.

Meanwhile, around 25 fighter jets circulated above greater Cairo, while several helicopters carried the flags of the Egyptian military and roamed the area around parliament.

Since the early hours of Saturday, hundreds of security personnel stood guard across Cairo and Giza, securing main roads leading to Downtown and the Egyptian Parliament.

Security dogs, military personnel, police special forces, high-ranking security officials, and heavily-equipped troops were stretched all over greater Cairo’s roads, blocking ones state officials passed through, and in Tahrir Square, the birthplace of the 25 January revolution.

On 2 April, the National Electoral Commission (NEC) officially announced that President Abdel Fattah Al-Sisi secured a second four-year presidential term with 97% of valid votes in a sweeping victory in the March presidential election.

The nearly 3% of the vote not won by the incumbent president went to little known politician Moussa Moustafa Moussa, an ardent supporter of Al-Sisi who entered the race at the last minute and did not campaign.

Al-Sisi, a former military officer-turned-politician, who came to power after the ouster of former president Mohamed Morsi, is before a myriad of challenges that Egypt is now facing, such as counter-militancy, especially in the Sinai Peninsula, a looming water crisis amid the ongoing construction of the Grand Ethiopian Renaissance Dam, and raising the social status of Egyptians after several neoliberal measures that slashed subsidies on certain goods.

The turnout in the election, 41%, was down from 2014, the first election Al-Sisi won outright a year after Islamist president Mohamed Morsi was ousted in an uprising. At that time, turnout was about 47%, but only after election officials agreed to extend the vote into a third day.

Born in 1954, one year after Egypt became completely independent from the United Kingdom, Al-Sisi has made much of growing up in a neighbourhood in Old Cairo where Jews, Muslims, and Christians all resided together.

A soldier his entire life, Al-Sisi attended a military high school, before graduating from the Egyptian Military Academy in 1977 and receiving his commission and serving under strongmen-presidents Anwar Al-Sadat and Hosni Mubarak.

Before receiving extra training at military facilities in the UK and US, Al-Sisi was named the youngest member of Egypt’s Supreme Council of the Armed Forces.