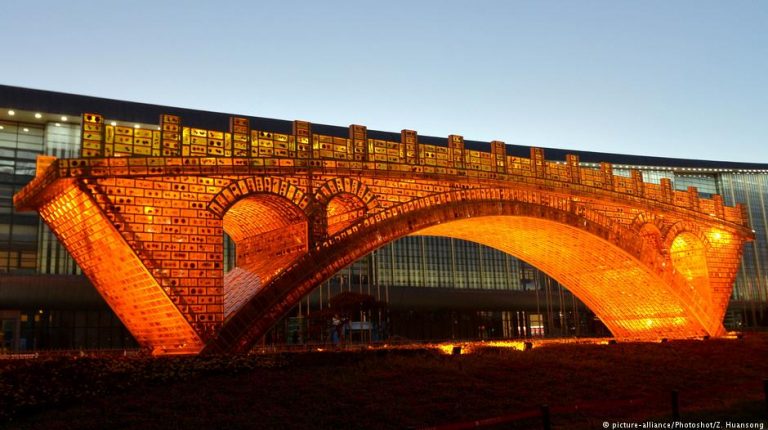 The highly ambitious Belt and Road Initiative promises to fortify China as an economic superpower. But negotiations around the Bangladesh, China, India and Myanmar Economic Corridor are proving contentious.China’s Belt and Road Initiative, also known as the New Silk Road project, has been featured prominently in the media ever since President Xi Jinping initiated the program in 2013. China has been touting the BRI as the 21st century’s biggest project. By 2020, China plans to have invested €500 billion ($580 billion) into it.

Judging by some ecstatic media reports, one might assume that thousands of cargo trains are already barreling from China to Europe, and that millions of containers are being handled at ports along the New Silk Road. In reality, however, the BRI faces some severe and partially self-inflicted problems — as the Bangladesh, China, India and Myanmar Economic Corridor demonstrates.

The BCIM is one of six planned economic corridors that China wants to promote in the context of the BRI. Initially, however, the BCIM started out as an independent subregional initiative pursued by China’s southwestern Yunnan province. Back then, it was not part of China’s large-scale BRI program.

In 1991, Yunnan established the BCIM Forum. Researchers and experts met to discuss the opportunities and risks involved in creating a direct land route between Kolkata and Kunming. They identified a number of potential benefits: The world’s most populous countries would be connected, a wealth of natural resources south of the Himalayas could be exploited, and hitherto isolated regions — chiefly India’s seven northeastern states, which depend on the Siliguri Corridor to for access to the rest of the country — could be integrated into the global economy. The political scientist Khriezo Yhome, from India’s Observer Research Foundation (ORF) think tank, even expressed hopes that the project could reduce competition between India and China and thereby contribute to peace and stability.

A BCIM Forum in 2013 brought few concrete results. That was mainly because of India’s reluctance to recognize the summit as an official intergovernmental meeting. So, the BCIM Forum remained little more than a place for academics and other experts to engage in dialogue, as the sociologist Patricia Uberoi, who works at the Institute of Chinese Studies in New Delhi, told DW. Uberoi participated in and contributed to the BCIM talks for many years.

Everything changed with the K2K car rally from Kolkata to Kunming. After Chinese Premier Li Keqiang visited India in May 2013, he and his Indian counterpart, Manmohan Singh, issued a joint statement saying that “encouraged by the successful BCIM Car Rally of February 2013 between Kolkata and Kunming, the two sides agreed to … initiating the development of a BCIM Economic Corridor.”

“By issuing this joint declaration,” Uberoi said, “the BCIM Economic Corridor became an official governmental project.” However, India and China had different expectations. “The economic corridor did not play an important role in Indian development plans, whereas the Chinese attached great significance to it.”

At the meeting, it was agreed to author a joint report on how to progress on the economic corridor project, based on four reports written by the individuals states. This was never realized, however, mainly because Myanmar lacks the resources to go ahead with the project, Uberoi said: “Myanmar said it needs more time. The process, started in 2013, still has not been completed and is way behind schedule.”

In addition to some states’ lack of resources, persistent mistrust and competition between India and China continue to pose a problem. In 2017, tensions came to the fore with the Doklam border standoff.

“India has repeatedly explained that the BCIM project is part of its ‘Look East’ policy,” Uberoi said. Since 1990, that has been all about connecting India with Southeast Asia in order to strength its own position — and weaken China’s.

The BCIM Forum started as a subregional initiative pursued by Yunnan and other western provinces. “But then Beijing took control over the initiative,” Uberoi said, “putting the commission in charge that also oversees the BRI.” Once China’s National Development and Reform Commission took over in 2015 — and began talking about the BCIM Economic Corridor along with the China-Pakistan Economic Corridor (CPEC), which is hotly contested by India — it had become apparent that the BCIM initiative had been integrated into China’s wider BRI program. That is understandable from China’s perspective: It’s a means of maximizing its influence. But it did not go down well in India. “A new emphasis was lent to the BCIM project when China made it part of its Belt and Road program,” Uberoi said. Now, India feels disadvantaged. From the outset, officials in New Delhi have stressed that India does not want to be included in China’s ambitious BRI program. And they have remained resolute on this matter.

Uberoi said it was unfortunate that China had appropriated the BCIM initiative. She argues that the numerous cultural, ethnic, and social commonalities shared by China’s Yunnan province, northern Myanmar, northern Bangladesh and northeastern India can be better utilized and integrated through a regional initiative than through a project run out of Beijing. “Much will depend on whether local authorities will be involved,” she said. “If the initiative were coordinated by Yunnan province, it would not be seen as a big threat,” she added. “That way, at least China’s central government would not be in charge.”

It would be good, Uberoi said, if other projects emerge that are less under China’s control. Initiatives supported by international donors, for instance, would be less humiliating for India. Currently, India’s northeastern regions are set to lose out; many development projects are on hold given the current situation.

Officials in India, meanwhile, must realize that China has already created facts on the ground, Uberoi said: “If India wants to establish a land connection to Myanmar and Southeast Asia, it will be confronted with Chinese infrastructure inside Myanmar.” As an example, she cited an oil and gas pipeline leading from the Bay of Bengal, via Myanmar’s Rakhine state, to the Chinese city of Kunming. Some strategists have expressed hopes of countering China’s north-south pipeline by establishing a link running from east to west. But it’s too late for that. “You can’t turn back the clocks,” Uberoi said.