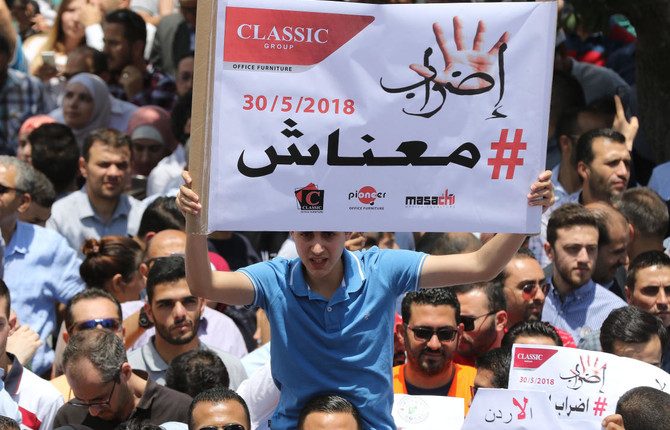 Jordan’s King Abdullah II on Friday ordered the halt of new fuel and electricity price hikes for a month, following mass protests that swept the country’s streets in the past several days and called for “the fall of the government.”

“The fuel pricing committee will be suspended, taking into consideration the economic conditions in the month of Ramadan, despite the sharp rise in oil prices globally after the average price per barrel hit $77 in May,” a statement from the King’s office read, according to the Jordan News Agency.

From Wednesday through Friday night, thousands of Jordanians took part in mass protests in the capital Amman and other cities against the increases in fuel and electricity prices and a new draft bill imposing a new income tax. The protesters blocked roads, burnt tires, and called for “the toppling of the government.”

The outrage came after the government decreed a new rise in fuel prices of up to 5.5% and a 19% hike in electricity prices, as well as laying out plans for a new income tax.

The new increase in fuel prices is the fifth since the beginning of 2018, while the electricity bills have been raised by 55% since February.

On Friday, 78 parliament members rejected the draft income tax bill, stating that it is “inappropriate.”

Meanwhile, Jordan’s trade unions, which urged citizens to demonstrate against the government’s new price hikes, agreed to hold a meeting on Saturday regarding the issue with the speaker of Jordan’s House of Representatives, Atef Tarawneh and the Jordanian prime minister, Hani Al-Mulki.

The loan aims at “advancing fiscal consolidation to lower public debt and broad structural reforms to enhance the conditions for more inclusive growth.” The country’s public debt reached $35bn, which is equivalent to 90% of its gross domestic product.

In November 2012, The Jordanians also demonstrated against fuel price rises, after the government cut fuel subsidies in a move to secure a $2bn loan. They chanted against King Abdullah and for “freedom” at the time.