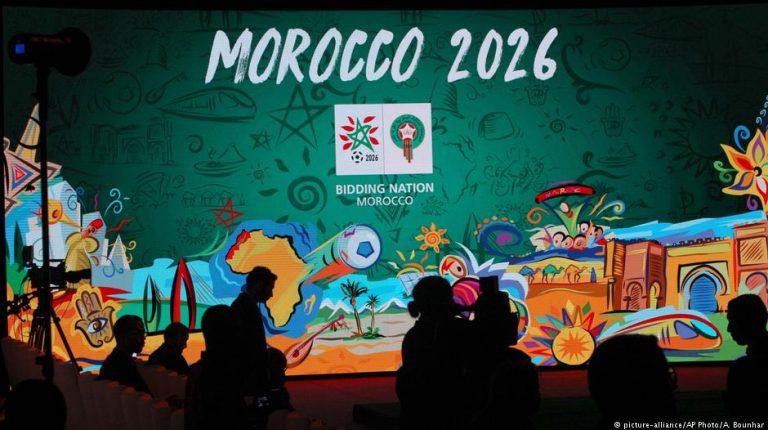 Despite being ranked behind North America by FIFA in its technical evaluation, Morocco is going ahead with its bid to host the 2026 World Cup. In April, US President Donald Trump warned against any opposition to the bid.After an inspection of facilities and infrastructure ahead of the 2026 World Cup, global soccer body FIFA gave the three-nation bid by the United States, Canada and Mexico four out of a maximum five points on Friday.

Rival Morocco, meanwhile, received 2.7 points and high-risk warnings for its stadium, accommodation and transport proposals. A minimum of two points was needed to qualify.

“The amount of new infrastructure required for the Morocco 2026 bid to become reality cannot be overstated,” the bid evaluation task force said. “The Morocco 2026 bid and United 2026 bid represent two almost opposite ends of the spectrum when it comes to the nature of their bids.”

The FIFA Council must approve both candidates at a June 10 meeting in Moscow before a FIFA Congress of 207 member federations votes on June 13 to decide on the winning bid.

While Morocco has highlighted the North African country’s passion for football, its compact size and proximity to Europe, it is up against a bid from the three American countries with the stadiums, transport and tourism facilities needed to host the expanded competition which will host 48 teams playing 80 games.

According to the FIFA evaluation report for Morocco, “only two of the 14 proposed stadiums would have sufficient levels of general accommodation to meet the minimum requirements.” The report pointed out that Morocco needs to spend $16 billion (€13.7 billion) on infrastructure, including buildings or renovations for its 14 stadiums.

No tournament-specific building work is necessary in the Americas’ bid, which forecast a tournament revenue of $14.3 billion, “significantly higher” than Morocco’s $7.2 billion.

In April, US President Donald Trump added his support to the US-Canada-Mexico bid and warned against opposition. “It would be a shame if countries that we always support were to lobby against the US bid,” he wrote on Twitter. “Why should we be supporting these countries when they don’t support us (including at the United Nations)?”

The FIFA inspectors also drew attention to human rights and labor standards in Morocco, noting that the country’s anti-LGBT law had not been declared to the governing body in the human rights risk assessment.

FIFA ordered more rigorous inspections after criticism of the 2018 and 2022 World Cup selection process in 2010, when Russia and Qatar won in a corruption-tainted vote, despite being judged as the riskiest options by a task force.