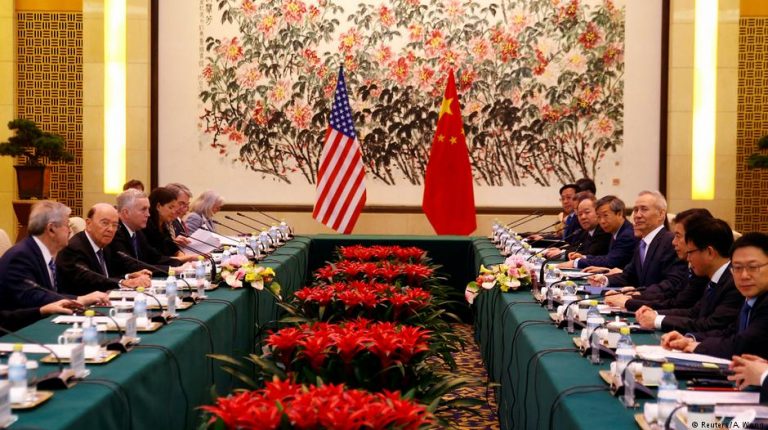 Beijing’s warning came as trade talks aimed at lowering China’s burgeoning trade surplus with the US came to an end. Earlier in the week, the US renewed a threat to impose tariffs on $50 billion worth of Chinese goods.Any trade agreement the United States and China reach would not stand if Washington goes ahead with a renewed threat to impose tariffs on Chinese goods, Beijing said on Sunday.

The warning came after the latest round of trade talks ended inconclusively in Beijing. The talks, led by US Commerce Secretary Wilbur Ross and China’s Vice Premier Lui He ended without a joint statement, or with either side releasing details of the negotiations.

But a short time later China issued a statement through the Xinhua news agency, saying, “If the United States introduces trade sanctions including a tariff increase, all the economic and trade achievements negotiated by the two parties will not take effect.”

There was no immediate response from the US delegation or from Ross himself.

China has broadly pledged to narrow its trade surplus with the US, which last year topped $375 billion (€320 billion). In May it agreed to “significantly increase” purchases of farm goods, energy and other products and services following the last round of negotiations in Washington.

But China has refused to commit to the US demand to slash the gap by $200 billion.

This week, the White House renewed its threat to slap tariffs on $50 billion worth of Chinese imports, tighten restrictions on Chinese investments in the US and stiffen export controls.

An editorial in China’s Global Times, a state-run newspaper, criticized the US for coming up with new demands.

“Tariffs and expanding exports — the United States can’t have both,” the paper said. “China-US trade negotiations have to dig up the two sides’ greatest number of common interests, and cannot be tilted toward unilateral US interests.”

The statement added that the negotiating process should be “based on the premise” of not fighting a “trade war.”

China’s attitude towards imports has been consistent: It is willing to increase imports from all countries, including the United States, according to Xinhua.

“Reform and opening up and expanding domestic demand are China’s national strategies. Our established rhythm will not change,” Xinhua said.

“The achievements reached by China and the United States should be based on the premise that the two sides should meet each other halfway and not fight a trade war,” the agency concluded.

US leverage against China appears to have been weakened by a sour mood among US allies after Washington imposed tariffs on steel and aluminum from the European Union, Canada and Mexico. Germany is also hoping its steel exports to the US will be exempted from sanctions.

Private sector analysts say Beijing may be willing to trim its trade surplus, but it will resist changes that might threaten its plans to transform China into a global technology competitor.