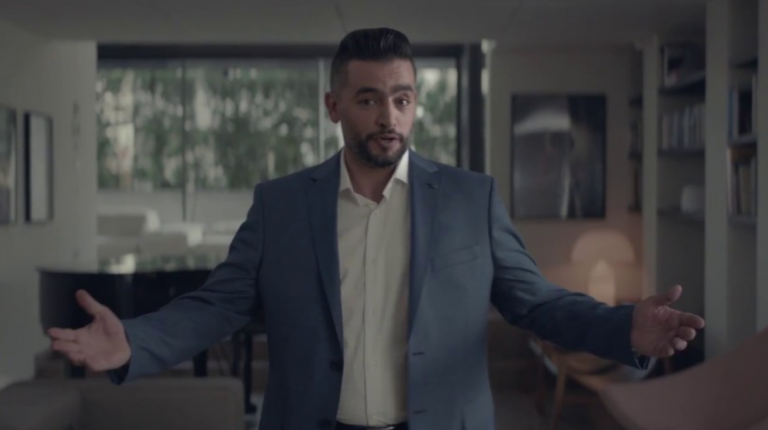 While accepting a part in an advertisement campaign for a new residential compound, famous Egyptian actor Hany Salama did not know it would open a barrage of criticism against him with floods of accusations that he insulted women and female fans stating that they lost their respect for him.

Appearing with an on-screen wife whom he constantly wants to get rid of and is portrayed as annoying and constant nagging caused a wave of rage among Salama’s female fans, who saw that the portrayed image of women in the ad is offensive and unacceptable.

Like many Egyptian artists, Salama took part in Memaar Al Morshedy’s recent ads, in which the company, one of the biggest real estate companies in Egypt, promotes its latest compound, Skyline. In the advertisement, Salama appears speaking to the audience saying that the compound’s services are very close to all residents, allowing them to do multiple things together, unlike anywhere else.

Married to a wife who appears to be annoying, the ad explores ways Salama tries to escape his on-screen wife’s stressful comments and pressure. In one of the scenes, he is featured having dinner with her, before he looks at the audience and says, “and if you are fed up, you can escape for a couple of hours and rest,” as the scene switches to him by a swimming pool.

In another scene of the ad, which is under a minute, Salama is displayed dancing with his wife.

“My head is spinning,” she says. “Yes, that is the exact required thing,” he answers.

Social media platforms showered Salama and the company with accusations of wrongly portraying females in the ads.

Women of Egypt, an advocacy movement with the aim of empowering Egyptian women, said that the advertisement makes fun of women in a supposedly comical way. “The advertisement contains clear male insulting messages. Instead of marketing the place as a residence for couples to spend time having fun together, it markets it as a place where men can escape their wives,” the statement read.

“Mocking women is the advertisement’s main theme. These male messages are being absorbed by children and create a whole generation that does not respect women,” it added.

Female social media users also expressed their rejection of the advertisement, saying that Salama already lost many of his women fan base, who make up the majority of the actor’s admirers, who is known to attract women for his handsomeness.

“It’s 2018, and as you may have heard, objectifying women and portraying them as dumb, whiney, and just downright clueless doesn’t go unnoticed anymore. It might come as a surprise to know that women actually have brains, and guess what, too: they use them,” Nour Nasrldin said in a Facebook post, adding, “I believe that this is precisely the ad’s message: now you have a place to run to whenever your wife’s getting on your nerves or your asshole children are just becoming too much. This is not only offensive but also sickening. According to the way you see females, and the way the ad creators obviously do as well; you all have some deeply rooted unresolved childhood issues that inhibit you from fully utilising your own brains.”

Meanwhile, many men defended the advertisement, stating that it only features reality, and showcases the life of most of men after marriage.

“I see nothing in this advertisement but the condition of most of my married friends. While some find it insulting, I believe it only mirrors real life,” a male user commented on Facebook.

For his part, the owner of Memaar Al Morshedy, Hassan Al Morshedy, published an official apology to the women of Egypt who saw the advertisement as offensive, explaining that they only intended to feature the reality of young married couples in a “light, funny way.”

“I have nothing but total respect for women. They helped me be the man I am today, and I will always be grateful to them,” he stated.

“Thank you for spotlighting this. We will be extremely careful the next time, and to all the women who felt insulted, we have nothing but love and respect for you,” he concluded.