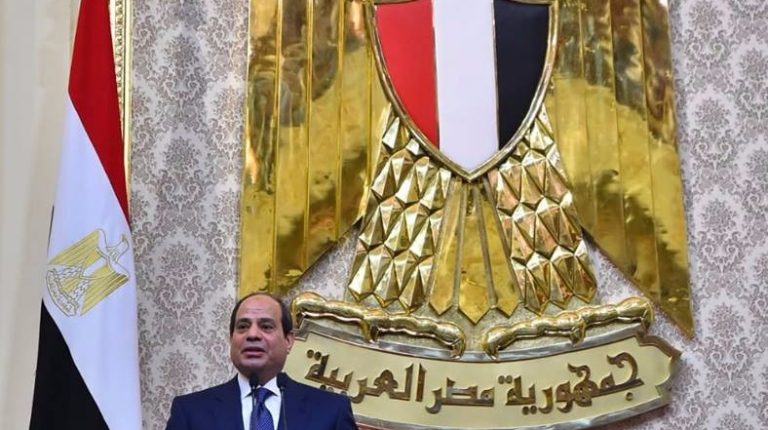 In a ceremony that has not taken place in years, President Abdel Fattah Al-Sisi swore the oath of office before the House of Representatives on Saturday. The president won his second term with 97% of the votes in an election which witnessed no real opposition and a turnout of 41%; about 22 million Egyptians.

While Al-Sisi drew public support back in 2014 through promises of ending terrorism and restoring economic stability to a country sinking in debt and with deteriorated infrastructure.

As the new presidential term begins, Al-Sisi is facing more public resentment towards economic policies—which experts agree should have been undertaken by former rulers decades ago—with side effects that increased financial burdens on the middle class and underprivileged.

In 2015, Al-Sisi’s regime sought to pursue needed reform through a $12bn loan from the International Monetary Fund (IMF), which in turn set requirements, at the top of which came the flotation of the Egyptian pound and subsidy cuts. The government also introduced a value added tax, originally at 13%.

Since then, continuous waves of price increases have affected all aspects of life, from fuel to cigarettes to commodities. In July 2017, inflation reached a record high of 33%.

Near the end of the president’s first term, the economy looked more stable with a GDP annual growth projected at 5.8% in 2018, a decrease in inflation to 13.1% in April, and the unemployment rate falling to 11.3% in the last quarter of 2017.

Whether such data is reflected on citizens’ lives remains uncertain, with indicators showing resentment at the continuation of price increases. Last week, unorganised protests erupted in metro stations following a significant increase in ticket prices.

Although the impact of such anger is unmeasurable yet, experts are sceptical of the ability of people to bear greater financial burdens, something Al-Sisi has referred to as a national duty for every citizen in order to overcome a critical phase. While the president has reiterated that there were no alternatives to harsh economic decisions, the challenge lies in the politics of their implementation.

Amid other demands the public is hoping for, politicians and intellectuals see several opportunities for Al-Sisi to introduce political and social reform which would empower his economic vision.

Seizing a major opportunity, Egypt is increasing its production of natural gas and expanding exploration of new wells, with the aim of becoming a net exporter and an energy hub. In 2015, the largest achievement in the field was the discovery of the mega Zohr field.

In May, the Ministry of Petroleum said drilling works were completed for wells of the Nooros area in the Nile Delta, with Italian energy company Eni also announcing a new oil discovery in Egypt’s Western Desert.

The first presidential term focused on creating the necessary infrastructure and legislation for the economy to grow and investments to be lured in.

In remarks to the Egyptian government in May, IMF First Deputy Managing Director David Lipton said macroeconomic stability and market confidence have been restored, adding, “[…] now the time has come to take advantage of the hard-won macroeconomic stability and push on to create jobs and raise living standards through sustainable growth. That may be difficult, but it would provide the payoff for all the efforts to date.”

According to Lipton, employing the young population is a challenge that could be an opportunity for Egypt. The IMF previously estimated that Egypt needs to create nearly 700,000 jobs every year.

Besides the need for youth employment, there are also demands for equal opportunities and wealth distribution. The latest public criticism in reaction to increased metro ticket prices also voiced anger over a decision that was recently passed to raise the salaries of senior public officials, including ministers and their deputies.

While the government made promises to increase salaries and pensions, experts pointed out that the step has not yet been implemented and that the increases remain low in comparison to the expensive market prices.

Political openness and inclusiveness have been major demands of Al-Sisi’s critics who repeatedly denounced the tight security grip on freedom of expression and closure of the public sphere. These demands have been revived by both opponents and supporters of the president ahead of his second term.

Many believe it would be an opportunity for the president to allow political parties to work freely and enhance legal means of freedom of speech. There were also calls for improvement of media rhetoric which has been pushing for polarisation and demonization of opponents. Women have also demanded more inclusion, such as in the judiciary and other leading positions.

The president, who organised numerous conferences bringing different political and social factions together for dialogue, said he hopes for a qualified political process to gradually take place. He said he was open to suggestions during a May youth conference.

In his first speech after the March election, Al-Sisi promised there would be no discrimination among citizens based on their differences in political views.

Al-Sisi did not ignore the deteriorated educational system which has been in place for decades in Egypt, promising a reform programme. The World Bank also approved a $500m loan for that purpose.

This comes as the controversy over the educational system increased in recent months, including from parents confused over the Ministry of Education’s vision of the system, teachers calling for decent salaries and trainings to enable them to provide higher quality instruction, and MPs pushing for suitable allocations for education in the new state budget for fiscal year 2018/2019.

The Egyptian health sector remains one of the country’s persistent issues. During his first term, Al-Sisi introduced several initiatives for improvement. A new health insurance law was passed by parliament and more hospitals were built.

One of the successes has been the aggressive government campaign against one of the most widespread diseases in Egypt, hepatitis C, acclaimed by the World Health Organisation.

Yet, most existing health facilities suffer a lack of proper equipment and quality of service, with most of the burden falling on the shoulders of the doctors who often get blamed and even assaulted for such lack of resources.

In his inauguration speech on Saturday, Al-Sisi placed education and health as priorities of his upcoming reformist vision. Al-Sisi reiterated once more that there would be no discrimination between his supporters or opponents, provided they do not use extremism and violence to impose their views. Still, in the past week, several influential activists were arrested from their homes for no apparent reasons but the state security apparatus has accused them of belonging to “terrorist” groups.