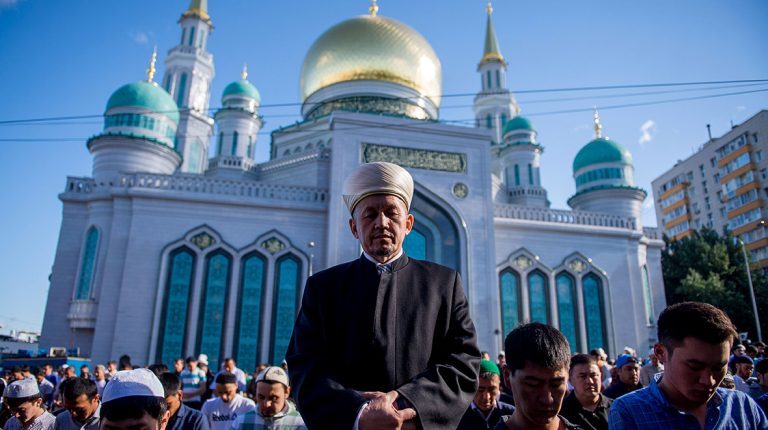 Ramadan has special elements that distinguish it from the rest of the months in Russia, like many enjoyable traditions that begin once the start of the holy month is announced. Some of these traditions include lighting roads and streets with special lights. Fasting hours in Russia sometimes reach 22 hours, which makes them among the longest fasting hours in the world.

Muslims in Russia go about their everyday lives without any changes in work hours or holidays, unlike the case in many Muslim countries.

There are four mosques in Moscow, and Tarawih prayers are performed in them throughout the whole month.

In Moscow, Ramadan tents beside all mosques is considered one of the most important highlights of Ramadan. They contain group fasting tables and accommodate up to 600 persons. Famous meals in Russian regions with Muslims are offered, and Quran competitions are usually held for children.

In Ramadan, Muslims in Russia are keen on inviting those who can read Quran well to read the holy book out loud then deliver a lesson or sermon, which is usually met with great attention.

Since Russia is a big country, each city in it has its own customs and traditions that distinguishes it from others.

During the month, relationships between Muslims blossom and people invite each other over for meals almost daily, especially families.

In recent years, the number of restaurants and shops that offer halal meat has increased, not only during Ramadan, but throughout the year. It is also common to see non-Muslims buying halal meat because they would be inviting their friends over for iftar at their homes, which is a beautiful gesture that positively affects their lives and relationships.

Similar to Muslims in Islamic countries, Russian Muslims wake up before the Fajr (dawn) prayer to have their suhoor, then the family of a single household performs the Fajr prayer together, after which they all go to work or school as usual. The only difference in Russia is the long fasting hours compared to the case in Muslim countries.

Kvass is a favourite traditional drink for Russians during Ramadan. It is made of “black bread” and is given the flavour of fruits, raisins, or herbs. Russians rely on this drink to deal with thirst.

In some areas in Russia, selling alcoholic beverages is banned during Ramadan.

One of the favourite meals of Muslims in Russia is a dish made of ground meat, rice, and spices, which is shaped into balls, and then boiled, with special sauce added on top.

Iftar tables in Ramadan mostly consist of vegetables and fruits, including the kompot, which is a drink made of fresh and dried fruits, and since fasting hours are very long in Russia, only delicious kompot can make a fasting person less thirsty at iftar. Afterwards, people have many kinds of different salads, then the main dish, which typically contains meat or fish.

There are also stuffed vegetables, such as zucchini, tomatoes, and eggplants, and there is duck and goose stuffed with sour apples and nuts, along with cakes which are considered a heavy dish themselves.

When it comes to sweets, Muslims in Russia only eat fruits, and during visits to one another’s homes, they make some sweets such as honey cake, known as medovik.