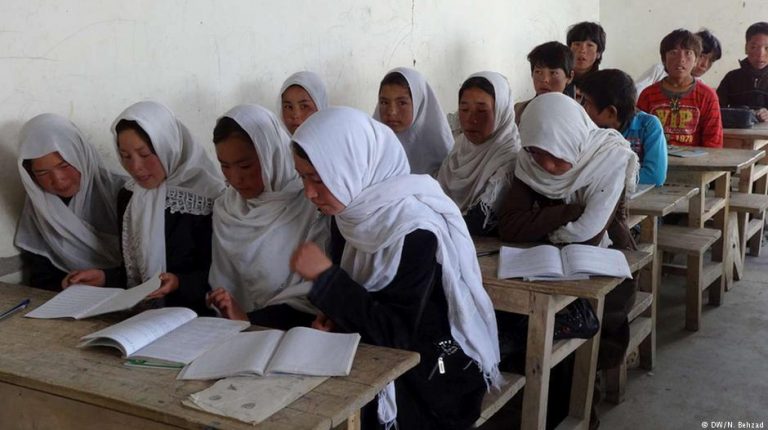 The UN’s children’s agency, UNICEF, has said at least 3.7 million children in war-torn Afghanistan cannot go to school. Girls are at a particular disadvantage, it added.The continuing conflict and poor security situation in Afghanistan have led to a rise in the number of out-of-school children for the first time since 2002, according to a report by the United Nations Children’s Emergency Fund (UNICEF) published on Sunday.

The report found that some 3.7 million children between 7 and 17 years of age were missing out on school, with girls accounting for 60 percent of that number, reflecting frequent gender-based discrimination in the country. In some provinces, including Kandahar, Helmand, Wardak, Paktika, Zabul and Uruzgan, the figure for out-of-school girls rose to as high as 85 percent, the report said.

Read more: UN: 2017 may be record year for attacks on schools

However, the report also noted some positive developments with regard to children’s schooling in that dropout rates were low.

Read more: The job hazards of an Afghan district governor

Adele Khodr, UNICEF’s Afghanistan representative, said that missing out on an education was not the only downside when children did not go to school.

“When children are not in school, they are at an increased danger of abuse, exploitation and recruitment,” she said.

She also emphasized the importance of school in giving children a point of orientation amid the disruptions caused by conflict.

“[Schooling] is about providing routine and stability in life, which is a wise investment given the insecurity across parts of the country,” Khodr said.

The security situation in Afghanistan has worsened still further since December 2014, when NATO-led international forces ended their combat mission and left Afghan security forces on their own to cope with an ongoing rebellion by Islamist Taliban militants.

The Taliban now control at least 14.5 percent of the country, with another 30 percent of territory embattled. The group sometimes bars girls from going to school in the areas it controls and also often dictates the curriculum in accordance with its fundamentalist Islamic beliefs.

The UNICEF report comes just a week after Taliban closed 27 schools in northern Takhar province as retaliation for the arrest of their chief of education in the province. More than 11,000 pupils were affected.

tj/sms (AFP, dpa, KNA)Every evening at 1830 UTC, DW editors send out a selection of the day’s hard news and quality feature journalism. You can sign up to receive it directly here.