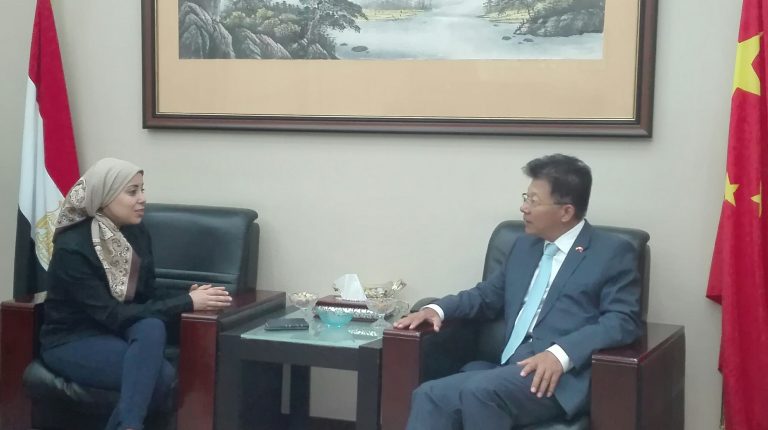 Han Bing, economic counsellor at the Chinese Embassy in Egypt, said that he expects bilateral cooperation between his country and Egypt may reach $17bn in 2019, including investments, financial support from Chinese institutions, and mutual projects, adding, “we are very optimistic regarding the future cooperation with Egypt.”

Bing told Daily News Egypt in an exclusive interview that Chinese direct investments in Egypt are just under $7bn. Moreover, Chinese financial institutions injected $5bn into the Egyptian financial market during the past two years, he said.

“Our total direct investments in Egypt are not at $600m as mentioned in some local reports. The real figure is much bigger in several sectors such as production, manufacturing, and services,” noted Bing, adding that Chinese companies have already invested more than $4bn in the oil and gas sector.

Bing said that Chinese fibreglass company Jushi invested about $570m until now into its production lines in the local market, adding that Angel Yeast Co, which is based in Beni Suef, is investing more than $130m. Moreover, New Hope Group has its own production lines for fish feed in Egypt.

A Chinese company cooperated with an Egyptian company to produce electrical transformers with about $700m in investments, added Bing.

The transcript of his interview is below, lightly edited for clarity.

Can you tell us about current financial cooperation?

During the past two years Chinese financial institutions signed agreements estimated at more than $5bn with Egyptian banks. The China Development Bank (CDB), together with Industrial Commercial Bank of China (ICBC) and other Chinese financial institutions, cooperated with Egyptian banks such as the National Bank of Egypt, Banque Misr, and the Saudi Investment Bank.

With the Central Bank of Egypt (CBE), we have a currency swap agreement, so we can say that Chinese financial institutions injected major financial packages into the local market.

A Chinese firm is cooperating with Egymac, a company producing electrical transmissions, through a Chinese loan worth more than $700m.

We are also involved in the electric train project linking Salam City and the New Administrative Capital at a total value of $1.2bn through a soft loan.

A Chinese company is implementing the Central Business District (CBD) of the New Administrative Capital with $3bn financed by Chinese banks. There is also another project being discussed by a Chinese company.

We expect another big cooperation project, which is the Hamrawein power plant project. Chinese companies offered the lowest price for the project’s tender at $4.4bn, while the Japanese offered the highest price which was $6.5bn.

Also in the energy sector, we are involved in solar stations in Benban, Aswan. The newly established bank in Egypt, Asia Infrastructure Bank (AIB), provided financing for the project.

For a long time, the CDB has been negotiating with the CBE on a new financial loan worth $1bn.When will the sides come to an agreement?

Negotiations between the China Development Bank and the Central Bank of Egypt are not concluded yet; we hope an agreement will be announced soon. However, both sides have already had very good cooperation.

A new loan is not concluded. It always requires long discussions, but it mainly depends on the Egyptian side as Egypt’s financial market has a very good situation, but if Egypt needs such a loan we will be happy to support it.

We know the financial situation in Egypt has improved compared to two years ago after offering bonds on the international markets and receiving a very good response.

We also know that international financial institutions such as the International Monetary Fund, the World Bank, and the European Union praised Egypt’s economy and financial market situation.

What do you think of Egypt’s investment climate?

Reform is being implemented by the Egyptian government and I think that the investment environment in Egypt is improving, especially after issuing the new Investment Law. We notice that the authorities are more active in attracting foreign investors.

We visited the investment services centre which is very well organised and equipped to make investors feel very comfortable. We saw some international institutions were praising the Egyptian market as an investment destination.

What is the name of that company?

The project was co-established by China’s Hengtong Optic-electric Co and Egypt’s HitekNOFAL Group. The company’s production of fibre optics is expected to be the world’s largest by the end of 2018.

What is the amount of their investments?

The amount of their investment is about $30m in the first phase only for one production line of the cables. However, the company will increase its investment to three of four lines to expand production.

What about the interest of new Chinese companies to invest in the market?

Some Chinese companies are mulling investment opportunities in steel production, solar energy production, and other sectors. We expect that we will have a bright future of cooperation in terms of investments.

We know Egypt is a very stable country. The election process was very smooth and we expect that the country will continue enjoying political stability.

Economic development is seeing a very good trend in Egypt. We see all the macroeconomic indicators are significantly improving. Obviously, we are very optimistic.

What are the latest trade statistics, for the first three months of 2018?

Actually, we had a decrease in our bilateral trade value last year because of the change in the market’s situation after the floatation. We see the situation now is gradually improving from the beginning of the second half of 2017 until now and we expect even better in the coming years.

Bilateral trade exchange statistics shows an increase by26% during the first quarter of 2018, reaching $2.8bn compared to the same period last year.

Are there any details about Egyptian exports in the first quarter of 2018?

Chinese imports from Egypt were at about $450m, a 50% increase when compared to last year. The trade imbalance decreased. I think bilateral trade will witness an increase by the end of the year.

What new agricultural products do you plan to import from Egypt?

We will consider importing Egyptian pomegranates.

China is a huge market, we expect to import a very big quantity of oranges and grapes. Last year, we opened the Chinese market to Egyptian grape imports and in 2018, we expect the amounts to increase.

When will you finish the evaluation process?

We are working with the Egyptian Agriculture Ministry to finish the evaluation process and adopt the technical measures. This year, we started with dates and we will have an expert group carry out investigations during the high season of dates.

We will open the Chinese market gradually, but first we need to make sure we will not be in danger, from a technical point of view.

Many media reports wrote about Chinese firms visiting Egypt recently. Can you review the outcome of their trips?

Yes, many delegations came to explore the local market’s situation, they were very interested in investing in Egypt mainly manufacture sector, but we cannot count the delegations because some delegations do not inform the embassy about their visits or ask for the embassy’s assistance.

For the outcomes, we expect that 2018 and 2019 will witness new major investments from Chinese firms in to the Egyptian market specially in textile sector.

Do you have any information about further business missions?

It is a continuous process, they are coming every month. We received some very important delegations, one of them is the visit of the China National Textile and Apparel Council, which is the former Ministry of Textiles in China. The chairperson of the council led the delegation, which included 43 members of the biggest textile companies.

The textile companies had a very good impression of Egypt. We expect some companies will make their investment decisions soon. Some delegations visited the Suez Canal Economic Zone, the Industrial Development Authority (IDA), and the General Authority for Investment and Free Zones (GAFI).

Companies which visited Egypt this year are very serious, they are not only looking at the market, but they will also announce real outcomes in the future.

Are there any updates regarding Chinese companies’ interest in the New Administrative Capital?

We have two big projects there. One is being implemented, which is Central Business District (CBD). It is a huge project with 20 high-rise buildings, including one to be the tallest in Africa, at 385 metres high. In March, we had a ceremony for the start of construction. Prime Minister Sherif Ismail attended the event.

Another project is still under discussion. I hope it will be concluded soon. The project is with China Fortune Land Development Co (CFLD). They are negotiating with the authorities of the New Administrative Capital for a land area of 63 sqkm to construct an industrial city. The planned city will be a huge project established with investment in the billions of dollars.

Another Chinese company is discussing a smart city project and a wastewater treatment project. There are many discussions for the New Administrative Capital.