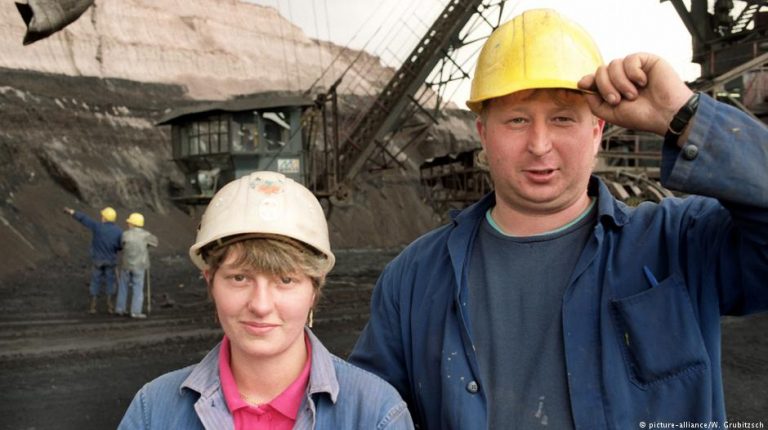 Germany is about to appoint a commission that will plan how the country is to give up coal. But it’s already under fire for prioritizing the economy over the environment.No other country burns as much lignite as Germany. Around a quarter of German electricity comes from the carbon-heavy fuel, also known as brown coal.

It’s cheap, it’s mined domestically and it’s responsible for around 20 percent of the country’s greenhouse gas emissions. If Germany is serious about its target of cutting its emissions to half what they were in 1990 by 2030, lignite has to go.

Government advisors have already warned that Germany can only meet its climate goals by shutting down the most inefficient — and therefore climate-damaging — plants by 2020.

Yet politicians have dithered. Now, a government-appointed commission is take responsibility for planning the country’s exit from coal, and setting a deadline to quit the dirty fuel for good.

Who exactly will be on the commission and what their mandate will be has been almost as controversial as the big questions it must address. The government has already postponed appointing the commission’s leadership three times — to a chorus of criticism from all sides.

“The priority of the commission is structural change. That is important, and we totally support that, but we worry that it will be more important than climate protection,” Tina Löffelsend, climate expert at the environment group Friends of the Earth Germany (BUND), told DW.

“We shouldn’t forget that protecting the climate and reaching the national climate goals are the main reason the commission was created,” she added.

Recent weeks have also seen fierce debate over the commission’s structure and membership.

Although not yet officially confirmed, four people are expected to lead the commission, which will also include representatives of eight federal ministries and six federal states — including those that produce coal — as well as more than 20 environmental organizations, unions, research institutes, and other lobby groups with diverse interests.

Critics say the commission has taken on “monstrous proportions” that will cripple its ability to make decisions.

“Everyone wants to have a say but no one is responsible for actually delivering results,” Michael Schäfer, climate expert at WWF, told DW.

Schäfer still hopes the government will trim membership, warning it will otherwise have little chance of success.

Strong coal unions
A recent study by Friends of the Earth Germany found that the country could shut down its dirtiest coal power plants and all its nuclear power stations at once, and still have a reliable energy supply.

What’s holding the government back isn’t so much the prospect of blackouts than mass layoffs from a sector that is strongly unionized, according to Sabrina Schulz, energy expert at the think tank E3G.

Around 20,000 people work in Germany’s lignite industry. Compared to the 340,000 jobs in the renewables, that’s a small number. But coal workers have traditionally been well organized in labor unions that have strong connections to political parties — particularly the conservatives’ junior coalition partner, the Social Democrats (SPD).

“Traditionally, politicians have told the coal industry what they want to hear,” Schulz told DW. “I don’t want to say they are bought. But over the years, a system has developed and worked well. This tradition continues.”

Saxony, Brandenburg and Thuringia, all of which are home to lignite mines , have regional elections coming up next year.

Politicians might very well be asking themselves, “Is this the right moment to tell people that lignite is over and they have no alternatives to offer?” Schulz says.

Quitting coal may not win votes in the regions that depend on it. But the wider German public is in favor.

According to a survey by the University of St. Gallen in Switzerland, 75 percent of Germans want their government to set the ball rolling for a coal exit as soon as possible, and would even accept a slight increase in energy prices as a result.

“The exit is not only urgently needed because of global warming but also supported by a majority in Germany,” says Anike Peters, energy expert at Greenpeace, which commissioned the survey. “Many regard it as an opportunity to modernize the country.”

“Chancellor Merkel should take the people’s will seriously,” Peters added.

Almost 100,000 Germans recently signed an online petition calling on their government to adopt an effective climate protection bill. In late May, environmental organization WWF presented the petition to the federal economy and environment ministries.

Now everyone is waiting for the coal commission to start its work. It is expected to deliver preliminary results at the end of October.