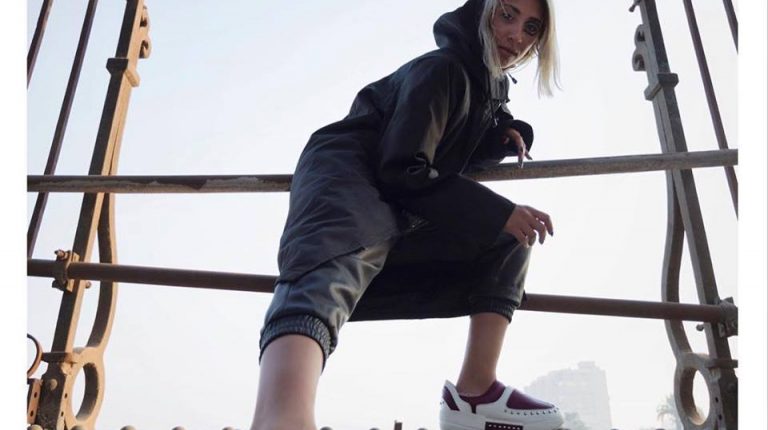 After years of a single-sided love affair with the fashion industry, five years of studying architecture, and numerous weeks in London College of Fashion’s footwear workshop, Jayda Hany finally walked one morning into a Cairene factory in order to put together her first collection.

Her elaborate sketches and detailed breakdown were met with bewildered silence. To the world, Hany is one of Egypt’s—if not the region’s—most promising talents in the footwear industry. Nonetheless, to a long chain of local factories, she is a mere girl with too much time and money on her hands.

“My gender is certainly the biggest obstacle. Nonetheless, when you combine my gender and age, you hit a bigger wall. It took me two years to find people I can have a creative conversation with,” Hany explained. “For example, the factory where I produce the soles is owned by older people; however, those who directly deal with me are almost my age, we share the same passions and some of them are even trying to start their own brands. Accordingly, it is easier for us to communicate.”

The footwear designer is often labelled as a pioneer in her scope of work. In addition to an MA in footwear design and a growing portfolio of media praise, her work was recently celebrated by a leading automotive tycoon; BMW. Her debut avant-garde collection of unorthodox heels was selected as a design reference for a one-off car. The unique vehicle was showcased during New York Fashion Tech Week before setting out on a tour.

Nonetheless, her journey towards such achievement was full of road bumps. Hopping between factories and workshops, Hany suddenly found herself juggling the tasks of a project coordinator rather than a creative designer. Every phase of production introduced her to yet another obstacle. For instance, her world of intricate technology-forward footwear embraced the notion of being limited in quantity and outstanding in terms of quality; two factors that local workers are not quite interested in.

“While their idea of minimum quantity is in thousands, mine would not exceed mere hundreds. For them, this is a joke and a waste of effort,” clarified the designer.

With that said, her design aesthetic was never the real problem. While fashion is a young industry, the supplying professions are quite the opposite. As the common age of designers is under 30, the average age of skilled craftspeople is above 45. On the other hand, each side is dominated by the opposite gender.

“I have had a reoccurring problem with not being allowed to get involved. So I would go to the factory with my sketches and materials. I would walk in and explain my designs—that is, if the owner listens to my interpretation—before the artisans make the sample. Nonetheless, if I do not like anything about the sample or I try to discuss it further, he would take it personally and since I was not involved directly with the workers, I was always one step behind,” the designer said. “I found that quite hindering and disappointing because I knew how far I could improve the results if given the space to talk directly with the people actually working on my designs.”

After investing numerous months to identify the right circle of factories as well as rising against biased arguments, Hany believes that the path is always paved with patience and explaining that there is more than just one way. Even though it is as consuming as it might sound, persistence seems to be the answer.

“The average worker would describe me as too demanding. To be honest, I am a perfectionist; if I see a line of stitching that is not aligned with the edge for instance, I would never stop before it is done properly,” explained Hany with a giggle.

Finding a dream team of understanding and open-minded factories to handle her ambitious collections was a major milestone for the designer; nonetheless, it was not the antidote to all of her issues. “I work with about six different factories per project. Each and every component is made in a different factory and then it is all assembled in an additional one, or even more,” said Hany as she counted on both of her hands her multiple phases of production.

While the designer’s professors at college would agree on the fact that a pair of shoes should not take more than 24 hours, local factories follow a different timeline. Since each stage is completed at a different factory, the same pair would take up to two or three weeks.

“No one seems to want to work in this industry anymore. It is difficult to find someone who is good and committed. Meanwhile, because they know that they are not that many, they tend to monopolise the craft and ask for more money than the average rate. Then of course, if the worker has enough money, he would just disappear, showing up once again only when he runs out of cash,” explained Hany sadly.

Simultaneously, local tanneries have their own private orbit. Unlike her experience with footwear manufacturers, the tanneries are closer to allies rather than suppliers. In spite of the demographical similarities between the average individuals running the two industries, Hany’s experience with each is quite the polar opposite.

“Local tanneries are a delight to work with. Egypt, Morocco, and Turkey have the world’s oldest tanneries. Therefore, they are the ones that export to factories around the world. We have the best leather due to our weather, personalised approach to raising cattle, and ancestral methods,” stated the designer proudly.

Despite the difficulties and challenges, which she has turned into daily companions, Hany still insists on employing local resources. “I take pride in being a product that is 100% made in Egypt and the materials are never a problem. If you manage to find the skilled workers and reach the right formula to deal with them, you would certainly have a smooth operation,” the designer said. “We currently have a great marketing opportunity. With the new import and export regulations, the local market is wide open for homegrown products; it is a whole new world.”

Capital Brunch III gathers Egypt’s top designers for a cause