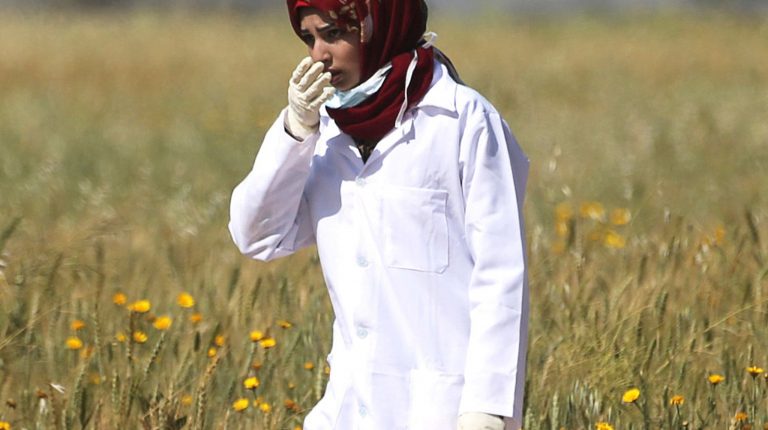 The killing of a 21-year-old female medical worker, Razan Al-Najjar, during the Great March of Return at the Gaza border was “nothing short of a war crime,” Palestinian officials said, calling on the international community to hold Israel accountable.

The murder of Al-Najjar was a direct violation of all “international treaties and conventions” that ensure the protection of medical staff in conflict zones, Palestine’s minister of health, Jawad Awwad, said late Friday, noting that the shooting of the paramedic must have been “deliberate” and amounted to a “war crime.”

Thousands of Palestinians, many dressed in white medical uniforms, took part on Saturday in the funeral of the nurse, who was shot dead at the Israel-Gaza border.

Al-Najjar, 21, a volunteer paramedic, was shot by Israeli troops near Khan Yunis on Friday, prompting outrage in Gaza. She was with the Palestinian Medical Relief Society, a non-governmental health organisation, and had studied to be a professional paramedic. She had been volunteering as a medic at the protests, known as the Great Return March since they started over two months ago.

The volunteer was shot in the chest by the Israel Defence Forces while she was helping wounded Palestinians. According to witnesses, she was 100 metres away from the Gaza-Israel border fence providing first aid to wounded protesters, when all of a sudden, she was targeted by an Israeli sniper’s gunfire despite wearing a clearly visible white coat. Al-Najjar was seriously hit by a bullet in her back that penetrated her heart, before she died of her wounds minutes later, according to the Wafa news agency.

The Israeli military has yet to comment on Al-Najjar’s death, while an anonymous witness told Reuters that, at the time of the tragedy, the medical worker wore a white uniform, which clearly distinguished her from the rest of the Palestinian crowd taking part in the 10th weekly Great March of Return protests.

Furthermore, the medical volunteer “raised her hands high in a clear way, but Israeli soldiers fired, and she was hit in the chest,” the witness told Reuters.

During the funeral, her father held her white, blood-stained jacket as ambulances and medical crews took part in the procession.

The Palestinian Medical Relief Society (PMRC) said three other first responders were hit by Israeli fire on Friday and that Al-Najjar was shot “as she was attempting to provide first aid to an injured protester.”

“Shooting at medical personnel is a war crime under the Geneva Conventions,” the PMRC said in a statement and it called for “an immediate international response to Israeli humanitarian law violations in Gaza.”

Al-Najjar became the latest victim of the Israeli crackdown on protesting Palestinians at the Gazan border. More than 120 protesters were injured by Israeli fire, including 40 by live bullets, directed at them by the Israel Defence Forces during the 10th Great March of Return rally. Another four paramedics were among those wounded while helping the injured.

The shooting of a medical worker is a “heinous crime committed by the occupation forces,” the Palestinian minister of justice, Ali Abu Diak, said in a statement, calling on the International Criminal Court to document Israeli brutality and to “try leaders, officials, officers, soldiers,” and all those who committed “crimes against humanity.”

International humanitarian law affords special protection to medical personnel whose mission is to save lives in conflicts, under the Fourth Geneva Convention of 1949. Article 24 was especially adopted to protect “medical personnel exclusively engaged in the search for, or the collection, transport, or treatment of the wounded or sick.”

Over 120 Palestinians have so far been killed since the beginning of the Great March of Return, mainly by live Israeli fire amid the raging protests at the Gaza-Israel border, which began on 30 March. Thousands of others have been injured as Israel maintains its right to protect the border using any means necessary.

Clashes continued late Saturday, with Palestinian residents saying Israeli aircraft struck two militant sites at the Gaza Strip, hours after rockets were fired from the enclave at Israel. An Israeli military spokesperson made no immediate comment.

The military had earlier said Gaza militants fired two rockets at Israel—one was shot down, while the other fell short, with no immediate casualties reported.

Some mourners on Saturday called for revenge and, after the funeral, dozens headed to the border fence and threw stones at Israeli soldiers. The Palestinian Health Ministry said five protesters had been wounded by Israeli fire in response.

Since 30 March, Gazans have protested at the Israeli border, demanding the return of land taken during the 1948 war. About 120 people have been killed in recent weeks, with Israeli being roundly condemned for using excessive force.

The United Nations envoy for the Middle East, Nickolay Mladenov, said in a tweet, “Israel needs to calibrate its use of force and Hamas needs to prevent incidents at the fence.”

The Israeli army said Saturday that cases such as Al-Najjar’s “in which civilians are allegedly killed” by Israeli fire “are thoroughly examined” by an internal military committee.

The military said its troops operated “in accordance with standard operating procedures” and insisted that they only opened fire at instigators. It accused Hamas of using the demonstrations as cover to carry out attacks.

Hamas has organised the protests to draw attention to the Israeli blockade on the territory.