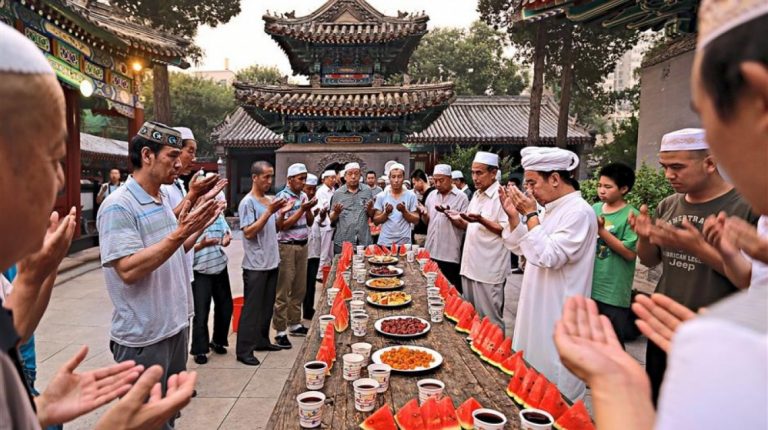 Malaysia is filled with people of many races and several religions, including Muslim Malaysians, and Muslim and non-Muslim Chinese and Indians. These different races and religions all live in peace in Malaysia, and there is a spirit they share during feasts and celebrations, so Malaysia is seen as a multi-ethnic country, with a Muslim majority of over 60%.

Ramadan is the most important religious event for Muslims in Malaysia. The month officially starts when the minister of religious affairs makes the announcement. Afterwards, streets get crowded, especially where there are shops that sell dates, nuts, and other popular foods in Ramadan. Even Buddhist and Hindu sellers fill their bazaars with Ramadan goods.

Once the start of Ramadan is announced, municipalities spray the main streets with water and clean main squares. Also, decorations and electric lamps are hung on mosques and in the streets.

Muslims exchange greetings, and owners of shops hang signs with phrases of congratulations on them, such as “Ramadan mubarak”.

During Ramadan and before the Maghrib prayers at sunset, the areas in front of mosques become very crowded, as free Ramadan meals are given away, known as “bubur lambuk”. It is rice soup mixed with special spices, meat, and vegetables. This dish can almost only be found during Ramadan.

After Maghrib prayers, the streets of Kuala Lumpur are rather empty until Tarawih prayers, when worshippers go out wearing their distinct Malaysian hats to pray amid decorations and lights. This atmosphere lasts until the time of suhoor, when Muslims eat their last meal prior to fasting.

In Malaysia, the wealthy host iftar tables in mosques, streets, and squares. Malaysian families have a famous Ramadan meal known as “ghatri mandi”, which is made from wheat, in addition to “taval”, which is made of rice, dates, and meat.

The most important revenue creator in Malaysia is the “Ramadan bazaar”. It is a festival with foods made in Ramadan, held anywhere with nearby residential communities, especially in cities.

Nearly two hours before sunset, Muslims race to these festivals to choose their favourite foods, drinks, and sweets.

It is not unusual to also see non-Muslims racing to buy various foods at these festivals, as some of these foods can be seen only once a year, including various grilled and boiled halal meat with spices and curry. Kebab, shawerma, qatayef, and mushrooms can also all be found.

There are also traditional Malaysian meals inspired by the cuisines of India, China, and Europe.

Some of the forms of closeness among Muslims in Malaysia include offering dates, Zamzam water, coffee, and tea to all worshipers—a custom inspired from the customs of people in Mecca and Medina.

Malaysians are keen on using incense in mosques in celebration of Ramadan. Additionally, some of the rich individuals spray perfumes and pleasant scents inside these mosques.

In rural areas, iftar is done in turns. Each house is responsible for feeding the people of the village in Ramadan, showing a great degree of interdependence.

In Malaysia, similar to the case in some Arab and Islamic countries, the “mesaharaty” is still a common sight, roaming the streets to inform people it is time for suhoor.

Malaysians are keen on having their suhoor and their famous local beverage, which is known as “colac”. It is rich with the necessary elements to help fasting Muslims feels less thirst throughout the day.

Muslims hold contests during Ramadan, such as contests of modern fiqh (Islamic jurisprudence) and Quran memorisation. At the end of the month, awards are given to winners in large ceremonies attended by officials from the Ministry of Religious Affairs.

Many Hindus and Buddhists become Muslims during Ramadan and announce it during the prayers of Eid Al-Fitr.

In the last 10 days of Ramadan, men remain in mosques in seclusion in large numbers. They are offered drinks and beverages as a form of solidarity that Malaysians are usually very keen on during Ramadan. Also, a few days before Eid, young people in Malaysia form committees in mosques to collect “Zakat” (alms) in order to give to the poor, so that everyone comes out of the month closer to God.