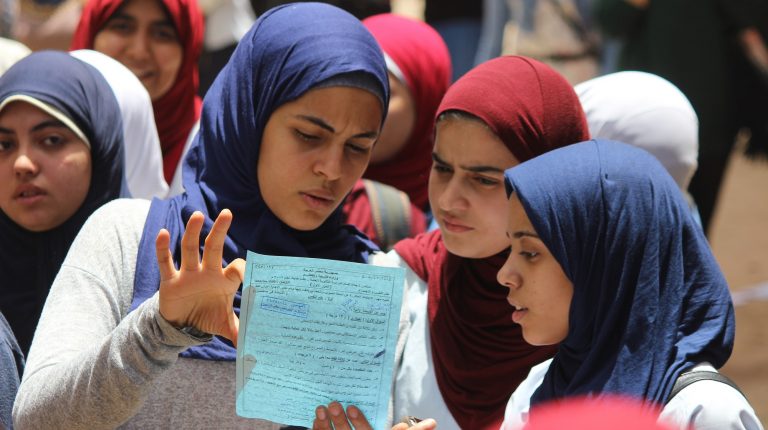 The agonising situation continues in 2018, despite many requests by families and students to improve the secondary education system in a way that could decrease the pressure and burdens on students.

Thanaweya amma is Egypt’s secondary school certificate, which is a prerequisite to apply for any universities or higher education institutions.

The exams season of this year started on Sunday with the first subjects tested being the Arabic language and religious studies. They are scheduled to end on 1 July. Over 500,000 students from different governorates are sitting the exams.

In January 2017, the Ministry of Education introduced the new examination system using booklets, which should reduce errors in the correction process and eliminate exam leaks. In it, the students are required to answer on the test papers and not in a separate answering sheet as in the previous system.

It further focuses on questions requiring short answers to cover most of the curriculum, thus moving away from structural questions and the traditional method of memorisation many Egyptians have grown accustomed to.

Also, recently, the ministry changed the system to calculate the final grade based on the final year, though students must now study extra subjects. The new system was introduced after decades of combining the last two years’ results as the final grade.

Daily News Egypt contacted some students and parents of those who are facing the exams of this year to inquire if there are any changes in the system after the application of the booklet system.

“I was depressed during the past weeks that came before the exams, I could not sleep well, I continuously cry, I break anything in front of me,” said Salma Abdelrahman, a 17-year-old thanaweya amma student registered in the science section.

Abdelrahman said that even though the exams have started, she still does not feel ready for them, despite the fact that she is aware of the entire curricula and she did finish studying big portions of them, to the extent that she is almost fully through her revision.

When asked about reasons why she is not yet ready, she said thanaweya amma exams are always unexpected, adding, “I could not get over the idea of facing any tricky questions, I do not know what will I do if I see the exam paper and find some questions that will sound new to me.”

Thanaweya amma students rely, throughout the whole year, on taking private tutoring classes, as the majority of those studying in governmental schools do not attend their classes. Private tutoring could lead a family to pay over EGP 20,000 over a single year.

The high school exams are famous for being difficult and challenging, however, the exam levels have improved during the past few years. Nevertheless, thanaweya amma trauma continues.

“Throughout the year, I spend too much money on private tutoring classes, I do my best to offer a good atmosphere of studying for my daughter. Still, I cannot guarantee that she will really succeed with high grades, to enrol in her dream university in the specialisation she wishes to study and work in, no matter how hard she studies, as always, final exams of thanaweya amma are an obstacle,” said Amal Thabet, a mother of a thanaweya amma student completing the science specialisation.

“I do wish to be able to finish the exams and have a deep sleep without feeling like I should wake up because something is chasing me,” said Ahmed Ashraf, a high school student, who continuously suffers from anxiety. He said he wishes to close his eyes and open them to find himself done with the thanaweya amma “nightmare” and enrolled in the college he has long dreamt of.

Another student, Yasmin Hussien, also agreed with Ashraf, saying that even if she decided to sleep and leave her studies, her parents will not let her do so. “I am pressured from all sides; my teachers, the curriculum, my parents, and of course, the percentage I should get to be able to enrol in the faculty of mass communications. I really wish all the noisy exaggeration that has been long dedicated to thanaweya amma ends, because our challenges are about getting good grades and this really makes us feel stressed, so please, no need for any other [stress] factors.”

In addition to the touch educational system, parents always impose great pressure on their children by forcing them in some cases to register in the science section to enrol in the faculties of medicine or engineering, as those faculties are regarded as the top ones in Egypt. For decades, Egyptian parents have felt more pride if their sons were able to enter those certain faculties and often hold big celebrations and spread the news. Faculties such commerce, languages, literature, or fine arts are seen as subpar to many families.

Some families hope that their children can achieve through thanaweya amma what they failed to achieve during their own time in education. A large number of students, for many years, were forced to register in the science sections just to satisfy their parents’ dreams and not theirs.

Hassan Ataallah, a 50-year-old supermarket owner, said, “I want my son to be a doctor, this was my dream and I failed to achieve it,” and when he was asked if his son really wants to be a doctor, he said, “I know that him being a doctor will make everyone respect him, hence will provide him with a decent life and a good future.”

Tayseer Mamdouh, after finishing an Arabic language exam on Sunday, said that the exam was alright, but she still fears other subjects, especially since she is registered in the science section.

“The thing is that I can finish all my curriculum, revise well, and do the exams, but still, I feel that I am not going to do well. I want to also mention that the curriculum we are studying is not totally important, I wasted a whole year studying useless information; I don’t think I would ever go back to it in my life. I am just studying to answer exams to get grades to enter a college,” she said.

Educational experts have always criticised the syllabi of the subjects of thanaweya amma, asserting that they are not of interest to students and that they are not well-trained to study such subjects. In addition to that, they further complained about the difficulty of exams that always include tricks not suitable for the learning levels of students.

For years, thanaweya amma has been a nightmare for Egyptian students, stirring among them fears and doubts of not reaching their goals, as in many cases, the final total of their grades was the main reason that hindered some students from entering the faculty of their dreams.

Parents spend large amounts of money on private tutoring, as well as school tuition fees. Students depend on private tutoring more than school classes during the thanaweya amma stage to learn the subjects they will be tested on. In some cases, parents send their sons or daughters to private universities where they can study their dream specialisation, but the trade-off is large sums of money.

In 2017, Egypt’s Education Minister Tarek Shawky announced that a new system will replace the traditional thanaweya amma system in the academic year 2018/19. The new system will cancel the scoring system of calculating total grades to switch to a grade point average (GPA). The proposed system is yet to be discussed in parliament, however, several lawmakers on the education committee have expressed concerns regarding the new system proposed by the minister.