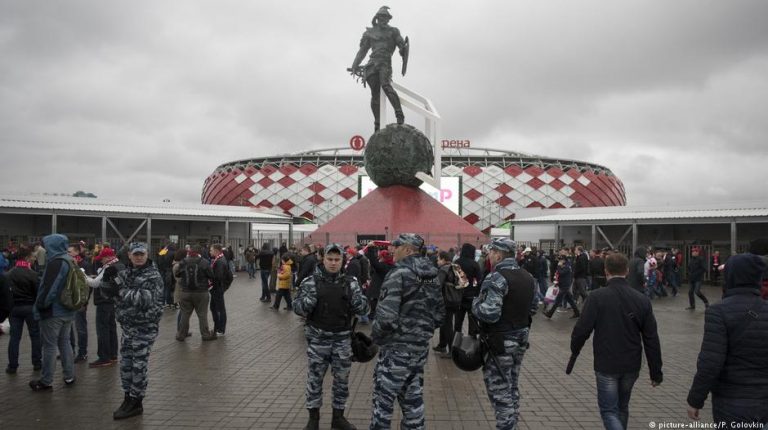 Football fans can travel to the World Cup in Russia without fear of hooliganism or terrorism, according to FIFA head of security Helmut Spahn. He insists the country is “very, very well” prepared.The port of Kaliningrad has long been the home of Russia’s Baltic Fleet, but not even Peter The Great could have imagined the scale of the operation in place to secure the 21st FIFA World Cup, which gets underway in Russia later this month.

A destroyer, two frigates, four corvettes, two anti-terror speed boats, air defense systems and tanks are all stationed in Kaliningrad alone, one of eleven host venues spread across the western part of the biggest country on earth.

In the face of an omnipresent terrorist threat coupled with fears of a repeat of the hooliganism which marred the 2016 European Championships in France, security is top of the agenda.

“Security is always an important issue, as it was in Brazil, South Africa, Germany and Japan and South Korea,” FIFA’s Head of Security, Helmut Spahn, told German news agency DPA.

“But I’m extremely satisfied with the cooperation between the Russian authorities and the World Cup organizing committee and the preparations they have put in place.”

Four years later, those figures are set to rise dramatically. But it’s not just the security of the visiting teams, fans and functionaries which is paramount, with President Vladimir Putin telling police chiefs in February that “the image of the nation depends upon the thoroughness of your work.”

The scale of the task facing the security forces cannot be understated and, with Russia currently embroiled in diplomatic disputes in Syria, Ukraine and the Caucasus, the potential terrorist threat is high.

But Spahn, 57, doesn’t believe it is any more acute than anywhere else, saying: “The terror threat is just as high, if not even slightly lower, than in France, England or Germany.”

The threat posed by terrorism has become a regrettable feature of modern sporting events, but Russia has another problem to deal with at the World Cup: hooliganism.

At the European Championships in France in 2016, Russian hooligans made headlines when they viciously attacked England supporters in Marseille. The thugs were well organized and trained and observers were shocked by the scale of the violence.

However, it seems unlikely that such scenes will be repeated on Russian soil. Not only are Russian hooligan ringleaders known to local police, there are measures in place to prevent potential foreign troublemakers from travelling in the first place.

For the first time, supporters have been issued with so-called Fan IDs which, combined with a valid match ticket, will act as temporary visas. Without them, fans will not be able to enter the country, let alone get anywhere the stadia – which themselves will feature several thorough security checks.

“We’re analyzing the situation with our Russian colleagues on a daily basis, but of course people still have images of Marseille in their heads,” said Spahn. “We have very good prevention concepts, so I think the risk of hooliganism like in Marseille is low.”

“My wife and two youngest sons will be travelling privately throughout Russia and attending games,” he added.

“If I had even the slightest concern that there could be problems, I wouldn’t let them do it.”