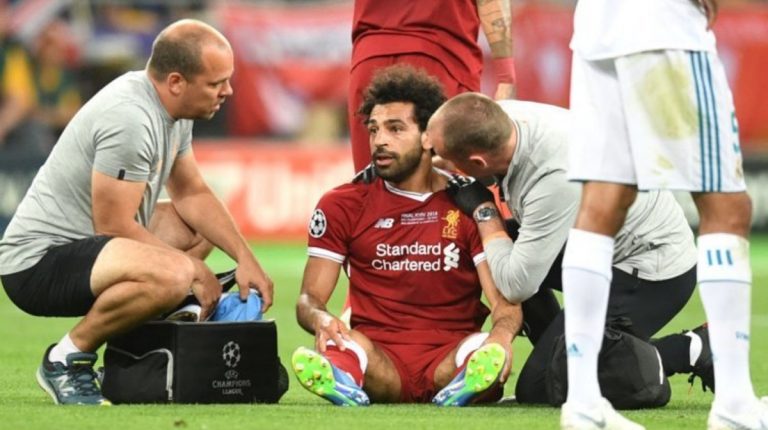 Egyptian Minister of Youth and Sports Khalid Abdel Aziz has been in office amid difficult circumstances experienced by Egyptian sports during the past five years. Since 2013, Abdel Aziz has managed to solve all crises that faced him and succeeded in leading the national team to qualify to the World Cup 2018 in Russia after a 28-year absence.
Daily News Egypt interviewed Abdel Aziz a few days ahead of the World Cup’s start on 14 June.

Does President Abdel Fattah Al-Sisi follow the national football team’s matches?
President Al-Sisi is keen to follow the Egyptian team’s preparations for the 2018 World Cup. He phoned the prominent Egyptian player Mohamed Salah to check on him after the injury he suffered in the UEFA Champions League final between Liverpool and Real Madrid. Salah became a symbol and role model for the Egyptian youth.
The president watches the Egyptian team’s matches and is pleased with their achievements and the qualification to the World Cup for the first time in a long time.

How do you see Egypt’s participation in the World Cup after a 28-year absence?
Undoubtedly, it was a great achievement. The current football team is capable of achieving the aspirations and dreams of the Egyptian people.

What are the latest developments on Salah’s injury?
Hany Abo Rida, head of the Egyptian Football Association (EFA), and the national team’s doctor, Mohamed Abou Al-Ela, met with Salah in Valencia, Spain, where he receives treatment and rehabilitation. They assured the Egyptian football fans that Salah will recover from his injury soon.
The delegation of the EFA was briefed on the treatment programme for Salah that will help him to play with the Egyptian team at the World Cup.
Salah showed a strong resolve to recover within three weeks, so that he can be ready to play with the national team in the World Cup according to the coaching staff’s vision.

How do you see the national team’s chances in the World Cup?
I am confident of the Egyptian national team’s capabilities. We have world class players and a veteran coaching staff led by Argentine Hector Cuper, who managed to reach the World Cup finals after a 28-year absence. This team also reached the final game in the 2017 Africa Cup of Nations held in Gabon after the team had failed to qualify to the continental tournament three consecutive times.
I believe Egypt’s rivals in the first round are moderate and we can present good performances and go further in the tournament. I wish Egypt was drawn with another Asian team rather than Saudi Arabia.

What is the optimal squad for Egypt in the World Cup?
The selection of the tam’s squad is the coaching staff’s responsibility under the leadership of Cuper. Anyways, I expect the national team’s list can include Essam El-Hadary, Ali Gabr, Ahmed Hegazi, Mohamed Abdel Shafy, Ahmed Fathi, Mohamed Elneny, Tarek Hamed, Abdullah Al-Saeed, Mohamed Salah, Mahmoud “Trézéguet” Hassan, and Mahmoud “Kahraba” Abdel Moneim.

What are your expectations for the Egyptian team in the World Cup?
I expect that we will qualify to the second round with a five-point score, showing great performance in the matches.

In your opinion, which team will win the 2018 World Cup?
Germany and Brazil seem to be strong candidates to win the World Cup because the Germans have great players who cannot be affected by any external factors outside the game.

How do you see the sports media’s performance in Egypt?

Egyptian sports have witnessed a large leap in the last two years, whether the issuance of the new sports law in accordance with the Olympic Charter, or the qualification to the World Cup. Moreover, Egypt reaped most of the African awards this year, winning the best coach and team awards, while Liverpool’s Salah was named the best player in Africa and the English Premier League.

Would you prefer to separate the youth department from the Sports Ministry in the coming period, or keep the ministry unchanged?

The current formation of the ministry serves youth and sports bodies at the same time. The combination of the two ministries helped me to remove any difficulties that may face one or both sectors.

In the past, there were two separate ministries of youth and sports and each had an independent budget. After the combination, we kept the things as they were.

Does the Ministry of Sports support the EFA and major clubs, such as Al Ahly and Zamalek?

The ministry has not provided any financial support to Al Ahly or Zamalek for about two years and a half. The only offered support comes in the form of construction and sports infrastructure that we paid for. However, we actually support some clubs, such as Al-Ittihad and Ismaily.

What about the financial aid for youth centres and small clubs?

When will fans be allowed to attend matches in stadiums?
The ministry sent a letter to the EFA announcing its approval of the return of fans to attend matches at stadiums by August with the start of the Egyptian League.
We will coordinate with the security authorities in all governorates to prepare the stadiums and football facilities to receive the fans.

How do you see the dissolution of some Egyptian football Ultras?
All the Egyptian officials welcomed the move and advised Egyptian fans to support their clubs without forming blocs or violating the law.

How have the Egyptian sports associations prepared for the 2018 Mediterranean Games?

All the sports associations are ready to participate in the 2018 Mediterranean Games, especially the associations of weightlifting, wrestling, and boxing. However, I believe that the organisers of the event have set an inappropriate date to start the games, only a week following the World Cup.

What about the Accountability State Authority (ASA)’s controversial report on the previous Olympic Games delegation’s violations?

They were just observations, not irregularities. The Egyptian Olympic Committee responded to the ASA’s report which was issued on 8 February. If the authority did not consider the committee’s response, the report would be transferred to the prosecution.

What are Egypt’s last preparations for hosting the 2021 World Men’s Handball Championship?
I met with Minister of Housing Mostafa Madbouly recently to agree on building three handball stadiums in Sharm El-Sheikh, Hurghada, and Luxor to host the championship.