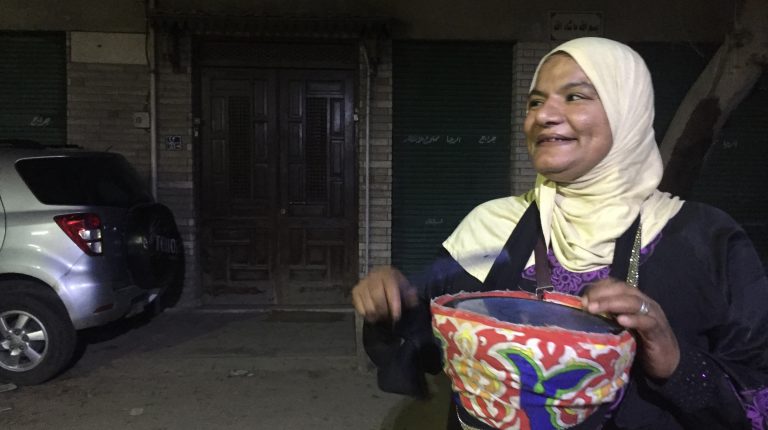 Influenced by her older brother, Dalal Abdel-Qader made her way in a non-permanent profession and started working as a mesaharaty in Cairo seven years ago. Despite criticism that she is begging which sometimes comes from her relatives, she still believes that her work should be respected, as it is a part of the holy month of Ramadan’s rituals, which are some say are close to extinction.

A mesaharaty is the traditional awakener, who beats drums, chants religious and folkloric songs, and sometimes reads poems to wake Muslims up before the suhoor meal before the Fajr (dawn) prayer, during the month of Ramadan.

It is a popular practice in Arab countries such as Egypt, Palestine, Saudi Arabia, Jordan, and Pakistan. It requires a person with a good health and a nice voice, as the work requires walking long distances every day.

Having a female mesaharaty is not familiar in Arab countries. Despite that, there are some who took the lead in such work, such as Abdel-Qader, who decided to enter the field for the sake of remembering her older brother Ahmed, who was also a mesaharaty, and maintaining a part of the holy Ramadan rituals.

“He was not just a brother, he was everything to me, and the only father I knew, as my parents died when I was a child,” said Abdel-Qader, adding, “thanks to him, I became his successor.”

Ahmed Abdel-Qader, who died in 2011, was a well-known mesaharaty in Cairo, who the Maadi neighbourhood knew well, according to his sister. “I used to accompany Ahmed on his wheelchair to wake people up before dawn,” said Abdel-Qader, adding, “I fell in love with what he was doing from the outset.”

From her early age, Abdel-Qader became obsessed with what Ahmed was doing, and the little details that distinguished him from others. “Even though he was disabled, nothing stopped him from doing what he loved,” said Abdel-Qader, adding, “he had his own special routine, before starting his night round, he decorated his wheelchair, drum, dressed up very well in preparation to meet people who were waiting for him each night in Ramadan.”

She noted that when being asked about the reasons behind the way he chose to dress, he said, “I am going to meet a lot of people of all ages, to sing, and please them; I had to be prepared for such moments.”

He was not just a traditional mesaharaty, Abdel-Qader went on describing her brother, saying, “he did not just walk the streets and wake people up, he was passionate about what he was doing, giving it all he can, with a lot of honest feelings,” said Abdel-Qader.

Despite how she started working with her brother 27 years ago, she became a professional mesaharaty only seven years ago, when he died.

“It was a real shock,” she said, adding, “when having a great and kind brother, it is not easy to lose him and be orphaned twice.”

A few days before Ahmed’s death, he asked Abdel-Qader to keep his drum. “I know you are the only one who will keep this alive,” she recalled him saying. Twenty-two days later, he died.

“It was his will for me to continue his path. I said to him, I am here my brother. Also, Abdel Razek, is here (their other brother), we can continue what you started,” she said, adding in tears, “it took almost a year to realise he was not here anymore.”

After his death, Abdel-Qader had to work to cover her family’s expenses, as well as her brother’s. “He never let us be in need of anything when he was alive,” she said, adding, “I also had to work because my husband started to suffer from chondrodynia in the same year, 2011, and becoming unable to work anymore. He had two surgeries and is currently waiting for a third one.”

Her life suddenly changed. “Everything turned upside down,” Abdel-Qader recalled, adding, “after my husband was a manager in his profession, getting a reasonable salary, now he cannot work due to his ailment.”

However, working only as a mesaharaty was never enough for a family consisting of six members. “I would never call being a mesaharaty passes for a job, as it is not permanent during the year. I had to knock on the doors of other professions; I worked as a carpenter, trailer, launderer, and even plumber. Anything that can offer me some decent money,” she noted, adding, “some people criticise our work by saying it is begging, but it is not, it is a respectable job, aiming to maintain a Ramadan tradition, which is about to disappear.”

Abdel-Qader became the breadwinner of three families: hers and her two brothers’ households.
“My brother Abdel Razek died four months ago, the responsibilities are bigger now, so any money I earn, I divide into three parts.”

She is the youngest sister, the spoiled one, among two male brothers and an older sister. “We used to have a beautiful, warm life, gathering, laughing, and singing old songs of Sayed Mekawy and Abdel Halim Hafez,” she said, adding, “at that time, we had no stresses or worries. Now life is empty, very empty.”

Despite the fact that she never went to school, she knows how to read and write at an average level. “I like to read about who used to work as a mesaharaty in the Arab and Islamic world. I believe the first one who worked such a profession was Bilal ibn Rabah, one of the loyal sahabah (companions) of Islam’s prophet Muhammad,” she said.

Photos of Abdel-Qader in her youth showed contrast to her appearance now, wearing elegant suits, with brown hair, standing with her older, only sister, Fatma. “We were almost a middle-class family in my early age; things have changed a lot through the years,” she said.

Ahmed, who was known as Elbasha, the man who put the love of mesaharaty’s work in Abdel-Qader’s heart, used to be a popular singer at weddings and ceremonies in his young years, she said. “The only thing that prevented him from being a famous singer was his disability,” said Abdel-Qader.

She went on to say, “at the beginning of the 1990s, people become more interested in hiring DJs and playing modern songs of more popular singers at weddings.” She added, “since that became popular, someone advised him to work as a mesaharaty, due to his beautiful voice and smiling face, he accepted the challenge and started.”

Abdel-Qader inherited that passion and love, walking the same streets her brother used to. “In his eyes, I loved Ramadan,” she said.

Despite her deep love for her work, she is afraid that the role of a mesaharaty is on its way to disappearing. “I wish to meet my colleagues in the streets, but it is rare to see anyone,” she said, adding, “once I saw a female mesaharaty, I was very happy, even if she was challenging me, but unfortunately, I never saw her again or any other women working in such a profession.”

Only during the two or three hours that she works every day during Ramadan does she feel alive. “I meet kind people, and I feel Ahmed is there, watching me, and wishing me luck.”

After becoming a nearly famous female mesaharaty, her story attracted the coverage of many media outlets. However, since she only has this attention in Ramadan, she has some bad experiences in that regard. 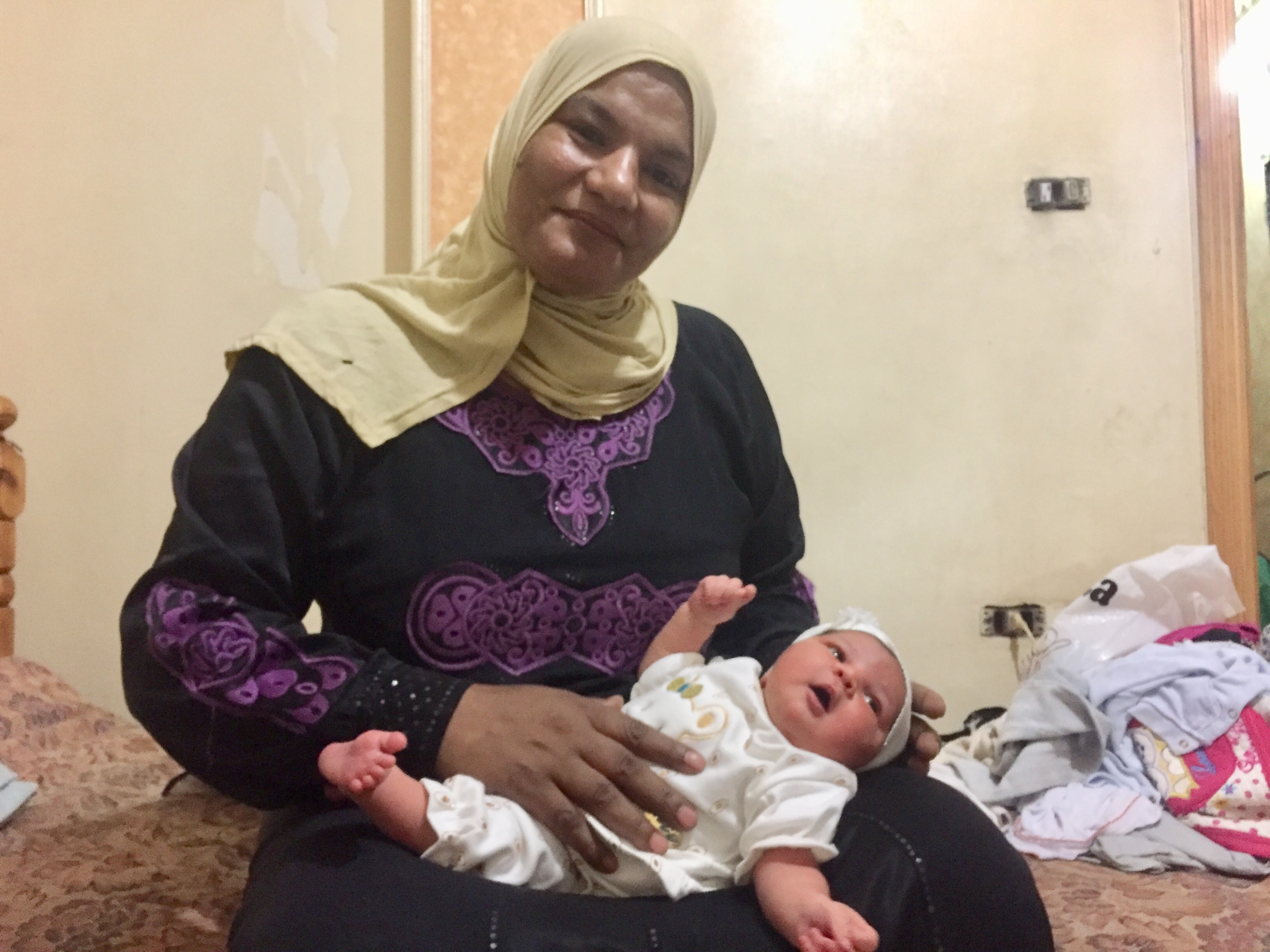 Abdel-Qader said that some TV producers “deceived” and even “mistreated” her, adding, “once I was a guest on a TV show, and after the episode finished, they were practically kicking me out of the studio. This was humiliating, why did you invite me if you could not even respect me?” she wondered.

“At other times,” she recalled, “media producers visited me at my house, lying about their media network, and I found out that I was aired on Al Jazeera and Mekameleen TV, without even knowing that.”

Abdel-Qader hopes one of her children could inherit the profession. “I tried with my only daughter, Shyma, but she does not have the required patience to continue working, but I think my son Mahmoud, 20 years old, now will be the upcoming mesaharaty.”

However, she does not wish the same for her granddaughter, Mecca, who was recently born. “I would never want her to live what I had lived. I will do my best to offer her a decent life and a bright future,” she said, while smiling at her.

Suffering oppression during the holy month