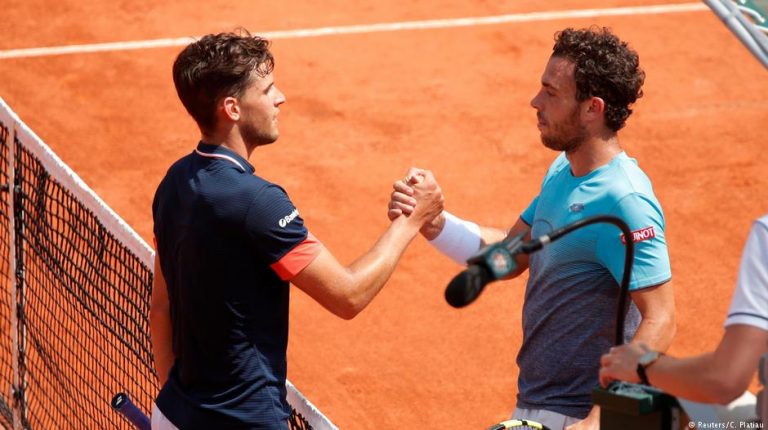 Dominic Thiem ended Marco Cecchinato’s run to the semifinals of the French Open on Friday. The Austrian will meet Rafael Nadal in his first Grand Slam final on Sunday, as Nadal chases an 11th title at Roland Garros.The fairytale had to end some time. Marco Cecchinato, ranked 72nd in the world, defied the odds three times to reach the semifinals, but a fourth straight upset wasn’t to be.

It was Dominic Thiem who eventually spoiled the party, breezing into Sunday’s final with a straight sets victory, 7-5, 7-6 (10), 6-1, that sent a clear message to his rivals. The Austrian reached the semifinal stage at this competition last year but is confident of going one better this time.

Cecchinato knocked out seeds Pablo Carreno Busta and David Goffin before an incredible victory against 2016 champion Novak Djokovic in the quarterfinals. Despite his glorious run coming to an end, the Italian was upbeat following defeat.

“Today, all day, on the Philippe Chatrier court, the fans said ‘Forza, Marco’, so I think this is the best moment for me,” said Cecchinato after the match.

Thiem, meanwhile, becomes the first Austrian to reach a Grand Slam final since Thomas Muster triumphed at Roland Garros in 1995.

“I need to regenerate and have a good breakfast to keep up my good level. Full power on Sunday.” Thiem said after the game.

Nadal, a 16-time Grand Slam champion, claimed his 85th win in Paris against just two losses after weathering a big-hitting opening set from 2009 US Open winner Del Potro to win 6-4, 6-1, 6-2.

“It was a very difficult first set and Juan Martin had lots of opportunities. He was a little unfortunate,” said Nadal, who reeled off 14 of the last 17 games, having seen Del Potro fail to convert any of his seven break points.

Nadal is now just the second man to reach 11 finals at the same Slam, equaling Roger Federer’s mark at Wimbledon. He will be wary of Thiem, who is the only man to defeat him on clay in the last two years.