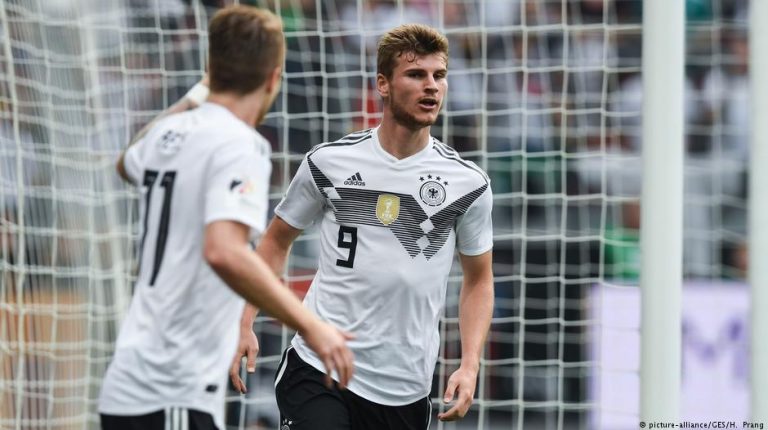 Germany rounded off their preparations for the World Cup with their first win in six games, beating a Saudi Arabia team who made life difficult for the world champions.

With Mesut Özil nursing a slight knee problem, Joachim Löw offered Julian Draxler and Marco Reus another opportunity to stake their claim for a starting berth in Russia.

It was Reus who shone, assisting the opener for Timo Werner with a cushioned assist for the RB Leipzig striker, and then playing a key pass in Germany’s second. A decent return for the Borussia Dortmund forward, who was starting a game for Germany for the first time in more than two years.

Saudi Arabia may be one of the weakest teams at the World Cup this year, but Löw fielded the strongest team available to him as he looked to build some momentum ahead of Germany’s opener against Mexico on June 17.

Germany began the game strongly and Werner’s finely taken opener appeared to set the tone for a dominant performance with plenty of goals. But the Germans toiled as they tried to break down a Saudi team who equipped themselves well as they sat deep and looked to hit Germany on the break. They came close to succeeding a couple of times late in the first half, but couldn’t convert their half chances.

That opened the door for Germany, who scored their second soon before halftime. Reus was involved again, sliding a ball into the path of Werner, whose low cross was turned into his own net by Omar Hawsawi, who was pressured by Thomas Müller.

But rather than turn the screw on Saudi Arabia, Germany took their foot off the pedal. Löw withdrew Manuel Neuer and Jerome Boateng as a precaution, and Germany suffered at the back in their absence. Ilkay Gündogan was also introduced to the fray, and was welcomed with jeers, after he and Özil met with the Turkish president in London recently.

Germany couldn’t finish the Saudis off and conceded a late goal after Sami Khedira tripped Taisir Al-Jassim in the box. Marc-André ter Stegen saved Mohammed Al-Salawi’s spot-kick, but Al-Jassim steered in the rebound.

Sausi almost forced a shock equalizer in stoppage time when Al-Jassim and Al-Salawi combined again, attacking down Germany’s right. But this time, Al-Salawi couldn’t quite make contact as the ball flashed across ter Stegen’s goal.

It was a less than satisfactory end for Germany, who get the victory but are a long way off their best as they prepare to fly into Moscow.

90+2′ — Nearly an equalizer! Taisir Al-Jassim receives a ball from Yasir Al-Sahrani on a break forward. He tries to pick out Mohammad Al-Sahlawi in the six-yard box, but Mats Hummels prevents Al-Sahlawi from getting the ball.

90+1′ — Julian Brandt nearly picks out Mario Gomez in the six-yard box with a cross from the right. The goal wouldn’t have counted as the flag was up for offside on Gomez.

84′ GOAL — Mohammad Al-Sahlawi’s penalty is saved by Marc André ter Stegen, but Taisir Al-Jassim scores the rebound to get Saudi Arabia on the board. Germany 2, Saudi Arabia 1

82′ — Jonas Hector plays a sloppy pass straight to Mohammad Al-Sahlawi, who fires a long range effort near the midway line.

81′ — Jonas Hector tries to play Julian Brandt in on the left side of the penalty area, but Omar Hawsawi comes over to slide tackle the ball out of play.

80′ — Yehya Al-Shehri combines with Mohammed Al-Burayk in the penalty area and tries to fire a shot, but his effort is blocked by Mats Hummels.

76′ — Toni Kroos plays Mario Gomez in on the left wing. Gomez picks out Julian Brandt at the far post, but the Leverkusen player cannot find the target with his volley.

73′ — Thomas Müller breaks forward with the ball and fires a shot from just outside the penalty area. Abdullah Al-Maiouf dives to his right to make the save.

72′ — Salem Al-Dawsari breaks forward and Niklas Süle tackles the ball away and out for a corner. Saudi Arabia plays the ensuing corner short, and the chance ends after Mario Gomez cuts out a pass from Mohammed Al-Burayk to Abdullah Otayf.

71′ — 30,210 people in attendance to watch Germany’s final tune-up friendly before the World Cup.

70′ — Abdullah Otayf fouls Joshua Kimmich not too far outside the penalty area. Julian Draxler’s ensuing free kick is knocked down by Abdullah Al-Maiouf for the save.

67′ — Yehya Al-Shehri completes a one-two with Mohammad Al-Sahlawi and fires a shot just over the crossbar.

58′ — Ilkay Gündogan involved right away, nearly getting on the other end of a ball through. Some Germany fans seem to be whistling him every time he touches the ball.

55′ — Thomas Müller receives a pass from Timo Werner at the top of the penalty area. He decides not to pass to Joshua Kimmich, who was making a run on his right, and instead turns and fires. Abdullah Al-Maiouf makes the save.

50′ — Jonas Hector crosses the ball on the ground to Julian Draxler. Draxler fires a shot from inside the box, but Abdullah Al-Maiouf makes the save.

48′ — Salman Al-Faraj plays a ball to Yasir Al-Shahrani on the left wing, but Al-Shahrani is called for offside.

47′ — Joshua Kimmich dribbles along the baseline before his shot is blocked over the goal line by Omar Hawsawi. Toni Kroos’ ensuing corner is headed on by Thomas Müller before Sami Khedira hits a shot over the crossbar.

— Saudi Arabia substitution: Mohammed Al-Burayk replaces Mansour Al-Harbi, who remained in the dressing room after the break. Yasir Al-Shahrani takes Al-Harbi’s position on the right, with Al-Burayk now on the left.

— Germany substitutions: Niklas Süle Marc-André ter Stegen is set to come on for Germany at the start of the second half, replacing Jérôme Boateng and Manuel Neuer.

— Sami Khedira is making his 75th appearance for Germany this evening.

43′ GOAL — Marco Reus plays Timo Werner through on the left side of the penalty area. Werner crosses the ball for Thomas Müller, who back heels the ball towards goal. The ball deflects off of Omar Hawsawi for the own goal. Germany 2, Saudi Arabia 0

42′ — Julian Draxler plays a ball over the top to Marco Reus. Reus collects it near the goal line and picks out Julian Draxler near the penalty spot. Draxler fires a shot that Müller taps in, but the flag goes up for offside.

41′ — Salem Al-Dawsari runs forward with the ball, cuts onto his right and fires a shot well over the crossbar.

39′ — Salem Al-Dawsari receives the ball on a break from Salman Al-Faraj. Al-Dawsari crosses from the right side of the penalty area, but Fahad Al-Muwallad’s shot misses wide left.

38′ — Yehya Al Shehri passes the ball back to Fahad Al-Muwallad after breaking forward with the ball. Al-Muwallad fires a shot from the top of the box that Manuel Neuer saves.

37′ — Julian Draxler swings the ball to Timo Werner on the left. Werner’s shot is blocked by Yasir Al-Shahrani and the rebound falls to Thomas Müller. Müller fires a shot off Julian Draxler and Marco Reus collects the ball on the right. Reus then picks out the head of Sami Khedira, and Abdullah Al-Maoiuf saves Khedira’s header off the post.

35′ — Yasir Al-Sharani tries to pick out Salem Al-Dawsari in the box, but Mats Hummels is there in time to clear the ball away.

33′ — Mats Hummels tackles the ball away from Fahad Al-Muwallad in the penalty area before Al-Muwallad could get a shot off. Saudi Arabia only have two shots so far in the game.

32′ — Timo Werner, Marco Reus and Thomas Müller combine for a terrific chance in the penalty area, but Werner’s header at the end of it misses wide right.

31′ — Sami Khedira receives the ball on the right side of the penalty area and fires a shot just wide of the far post. The goal wouldn’t have counted anyways as the flag was up for offside.

29′ — Abdullah Otayf tries to find the run of Fahad Al-Muwallad through the middle, but Manuel Neuer reaches the ball first and heads it down for Jerome Boateng. Neuer has come off his line in this friendly much more than he did in Germany’s 2-1 loss to Austria last Saturday.

27′ — Joshua Kimmich receives a ball from Toni Kroos in midfield and fires a cross from the right wing over the head of Marco Reus at the far post.

26′ — Jerome Boateng plays a ball over the top to Marco Reus, but the ball flies over the goal line and out of play before Reus can cross it to Thomas Müller in the penalty area.

25′ — Toni Kroos plays a ball over the top to Sami Khedira, but Khedira is flagged for offside.

22′ — Joshua Kimmich’s cross is cut out by Omar Hawsawi and he dribbles the ball out of play.

21′ — Marco Reus tries to play a quick through pass to Timo Werner, but the ball is too far ahead of the speedy forward and Abdulla Al-Maiouf snatches it up.

20′ — Timo Werner tries to complete a one-two with Julian Draxler, but his pass is too far in front of the Paris Saint-Germain forward.

19′ — Manuel Neuer gets a cheer from the crowd after collecting a back pass from Jonas Hector, volleying it in the air a few times and clearing it away before Fahad al-Muwallad closed him down.

15′ — Sami Khedira receives the ball in space on the right wing and fires a shot from just outside of the penalty area that flies wide to the right.

13′ — Taisir Al-Jassim dribbles ahead in midfield before taking a speculative effort from well outside the penalty area, one which Manuel Neuer traps for the save.

11′ — Timo Werner receives a ball from Sami Khedira, dribbles into the middle and unleashes a shot that Omar Hawsawi blocks. Marco Reus receives the rebound and hits the post with his follow-up effort.

10′ — Julian Draxler recieves a ball near the six-yard box, but he cannot hold off Yasir Al-Shahrani and Abdullah Al-Maiouf gathers the ball.

8′ GOAL — Joshua Kimmich plays a ball over the top to Marco Reus. Reus collects it and taps it to Timo Werner, who fires in the goal. Germany 1, Saudi Arabia 0

7′ — Timo Werner crosses the ball to Mats Hummels, whose shot is blocked by Osama Hawsawi.

6′ — Omar Hawsawi beats Joshua Kimmich to a ball from Jerome Boateng from the right and clears it away for a corner. Toni Kroos plays the corner short to Kimmich, who resets the play.

5′ — Joshua Kimmich plays a ball over the top to Timo Werner, but he hits it too hard and Abdullah Al-Maiouf snatches it from the air.

5′ — Yasir Al-Shahrani hits a ball over the goal line for a corner. Julian Draxler plays the corner short to Toni Kroos, but Kroos’ cross is cleared away.

3′ — Joshua Kimmich goes down on the right wing after a foul from Mansour Al-Harbi. Toni Kroos picks out Jerome Boateng, who heads a ball towards goal. Mats Hummels gets a touch to it from an offside position.

2′ — Joshua Kimmich puts in a cross from the right, but Abdullah Al-Maiouf comes off his line to scoop it up before Timo Werner can get on the other end.

— Marco Reus has returned to Germany’s starting lineup, starting in the position of the injured Mesut Özil (knee). He is hoping to make his first appearance in a major international tournament this summer.

— Here is Germany’s lineup for tonight: …and Saudi Arabia’s

— Germany take on Saudi Arabia in their final World Cup tune-up before they head to Russia. Joachim Löw named his final World Cup squad on Monday, leaving off Leroy Sané, Jonathan Tah, Nils Petersen and Bernd Leno. Manuel Neuer, who spent most of the club season on the shelf with a foot injury, will try to follow up his strong performance in Austria with another one tonight in Leverkusen.