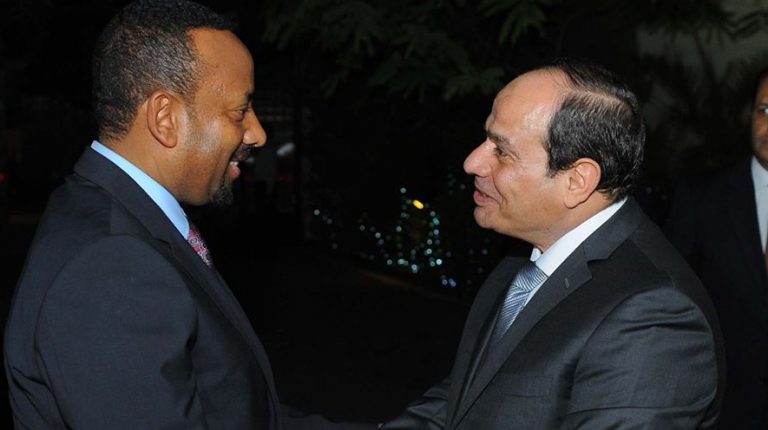 Egypt’s President Abdel Fattah Al-Sisi met with the Ethiopian Prime Minister Abiy Ahmed on Saturday night, in Ahmed’s first visit to Egypt since he assumed office. Ahmed arrived in Cairo on Saturday for a two-day visit, according to a statement from presidency spokesperson Bassam Rady.

Ahmed’s visit to Cairo comes amid controversy in Egypt over the Grand Ethiopian Renaissance Dam (GERD), which is believed will affect Egypt’s share of the Nile’s water.

According to the statement, Al-Sisi and Ahmed discussed international and regional issues of mutual interest. They also addressed the situation of negotiations over the GERD. During the discussions, the two leaders agreed on similar views for the two countries, which are to respect each country’s right to achieve development and not to harm each party’s rights.

Meanwhile, the Ethiopian minister of water, irrigation, and electricity, Seleshi Bekele, arrived in Cairo on Saturday, heading an Ethiopian delegation to discuss bilateral cooperation between Egypt and Ethiopia, and the issue of the GERD.

The visit aims at preparing for the upcoming nine-party meeting of the ministers of foreign affairs, water, and heads of intelligence of Egypt, Sudan, and Ethiopia. The meeting will be held on 18 June in Cairo.

In January, Al-Sisi signed several bilateral agreements with former Ethiopian Prime Minister Hailemariam Desalegn during his visit to Egypt. Al-Sisi said at the time that the Nile River Basin is a source of development, not conflict. He further added that Egypt, Sudan, and Ethiopia are working on overcoming the current critical situation, praising Ethiopia’s interest in not harming Egypt’s water interests.

The former Ethiopian prime minister stressed at the time his country’s commitment to work with the technical team regarding the GERD, asserting that Ethiopia is understanding of Egypt’s concerns over the GERD, which he stressed will not affect Egypt’s water security.

Construction on the GERD started in April 2011, amid Egyptian concerns that the construction of the dam could negatively affect its historic Nile water share of 55bn sqm, which it has had access to since a 1959 agreement with Sudan.