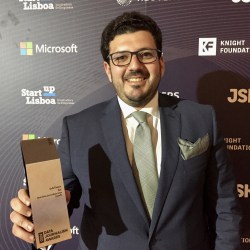 Amr Al-Iraqi, CEO of InfoTimes, said, “I am very pleased that InfoTimes has received this international award, which acknowledges the team’s efforts over the years.”

“I would like to thank the GEN awards’ jury and the InfoTimes team for its hard work that enabled us to reach this important stage. It makes me feel enthusiastic and responsible, because winning such an award adds more responsibilities on our burden to increase the awareness about data journalism in Egypt and the Arab world. InfoTimes helps journalists to exercise their supervisory role and develop their media tools to write serious topics that can contribute to improving our Arab societies,” Al-Iraqi added.

The winning teams of this year’s Data Journalism Awards were selected by an 18-member jury headed by Paul Steiger, the executive chairperson of ProPublica’s board of directors. Steiger previously chaired the board of the prestigious Pulitzer Prize. There were 630 entries from 58 countries, divided into 12 categories, including: best data visualisation, best news data app, best data press site, best large data journalism team, and best small data journalism team, which requires that the number of employees not exceed 30 individuals.

The GEN jury had announced that InfoTimes reached the short list of the award at the end of April, among nine nominees in the same category from Sweden, Netherlands, Britain, Spain, and other countries, as well as 99 other nominees in all categories.

The jury included a group of senior data journalists from leading media and academic institutions and technology companies worldwide, such as Reuters, ProPublica, the Economist, Google, and Microsoft, as well as Columbia, Miami, and Amsterdam universities.

Founded in 2012, InfoTimes is a data-focused team of data experts, coders, and innovative designers who develop data-driven journalism in Egypt and the Arab world by providing training and consultancy for press organisations, producing paid stories and technology solutions to help journalists in their work.