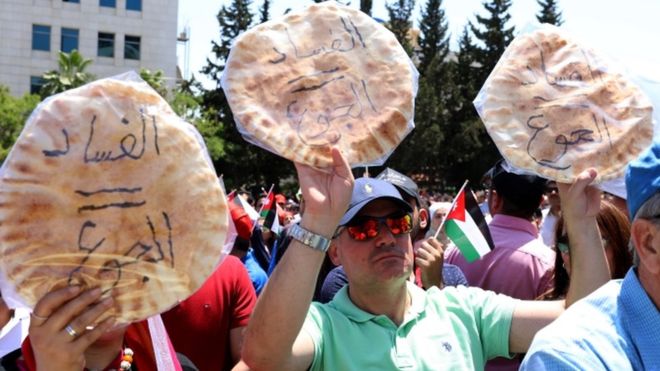 Saudi Arabia, Kuwait, and the UAE on Monday pledged to offer $2.5bn to help support Jordan in its recent standoff that led to thousands of Jordanians demonstrating against the International Monetary Fund (IMF)-backed austerity measures.

The Saudi Press Agency (SPA) reported that the package of economic aid will include a “deposit at the Central Bank of Jordan, guarantees for the World Bank in the interest of Jordan, annual support for the Jordanian government’s budget over the coming five years, and financing from development funds for developmental projects,” a joint statement from the three countries read.

On Saturday, Saudi Arabia called for a joint meeting in the holy city of Mecca with the two other Gulf states to support Jordan’s economy, following mass protests by tens of thousands of Jordanians flooding the streets of Amman and other cities against the recent hikes in fuel and electricity prices and a controversial proposed income tax bill.

Jordan’s King Abdullah II heeded angry protesters’ demands of withdrawing the income tax bill and dismissing the government, though the moves have not succeeded in containing the outrage or ending the crisis.

Last week, Hani Al-Mulki quit as prime minster following a meeting with King Abdullah II, in a bid to contain a wave of angry demonstrations that swept the streets, demanding the changing of the government.

Meanwhile, the new prime minster, Harvard-educated Omar Al-Razzaz, said that there was a consensus to drop the controversial draft law. However, that did not stop the protests.

The repeated price increases and austerity measures come as part of demands for a three-year loan agreement worth $723m by the IMF, signed in 2016. The new increase in fuel prices is the fifth since the beginning of 2018, while electricity bills have been raised by 55% since February.