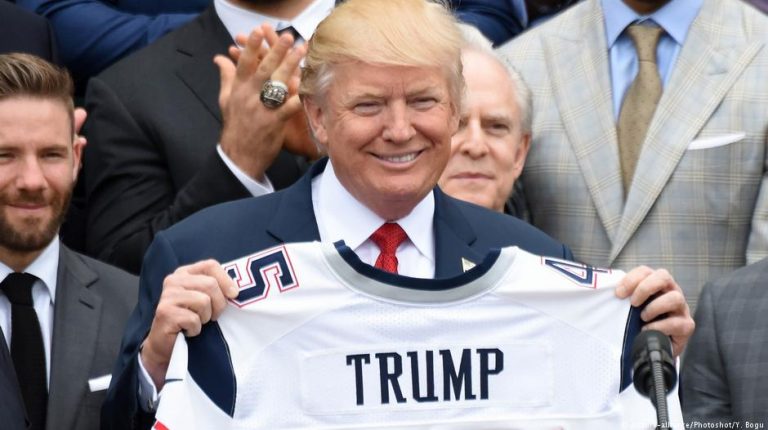 FIFA is set to decide which country or countries will host the 2026 World Cup: the United States, Canada and Mexico – or Morocco. Could a tweet by the US president swing the vote in Morocco’s favor?A tweet is no longer just a message; a tweet can change global politics and write history.

However, the international community knew this long before this past weekend, when US President Donald Trump made a mockery of a statement issued by the world’s seven biggest industrialized powers by informing the rest of the G7 in 280 characters that, he was withdrawing his endorsement of the communiqué after all.

And another Trump tweet could play a decisive role in the result of a vote taking place this week, a vote which, like the G7 meeting in Quebec, could take on historical significance.

On Wednesday, members of world football’s governing body FIFA are to vote on who should host the 2026 World Cup: the United States of America, together with neighbors Canada and Mexico? Or little Morocco?

It’s the first World Cup vote since the scandalous events of December 2, 2010, when the 2018 and 2022 tournaments were awarded to Russia and Qatar respectively.

It’s also the first vote in which the entire FIFA Congress will take part, rather than just the small inner-circle of FIFA’s 24 Executive Committee members.

What’s more, it’s the first vote on the awarding of a mammoth 48-team tournament, instead of the current 32. Which means: a longer competition, with more stadiums, at greater cost.

But most of all, it’s a vote which, after looking like a done deal for so long, is suddenly interesting. And that’s down to politics.

It all started with one man: Sunil Gulati. The former head of the United States Soccer Federation (USSF) is the mastermind behind the US bid, together with Canada and Mexico.

A lecturer at the prestigious Columbia University in New York, it was Gulati who developed “United 2026” – a united bid in every sense of the word, and an attempt to show the world that America can do more than just Trumpian unilateralism.

Unfortunately, the contradictions become immediately apparent. Of the 80 matches, Canada and Mexico will only host 10 each with the remaining 60 taking place in the United States, including all the games from the quarterfinals onwards. “United 2026” is a US bid, with a couple of scraps generously tossed north and south.

While Canada, a world power in ice hockey, seems happy just to be involved, reactions in Mexico couldn’t be more different. Ask fans on the streets of Mexico City or at a Mexican league match what they think, and most are disappointed.

“If you’re going to have a joint World Cup, then the matches have to be distributed fairly,” said one supporter of Mexican top-flight side Xolos, from Tijuana near the US border. “The USA just want to garner support from Mexicans and the rest of the world,” opined another.

Ask Gulati about the disproportionate awarding of games and the functionary’s answer is quite clear: “We could easily have done it alone,” he said. “Mexico and Canada would need to build new stadia if they wanted to host it alone.”

He did admit however, that the inclusion of Mexico and Canada is “positive for our image. It’s good to have Latin America involved and Canada is also a respected country, so it’s obviously helpful.”

And then, in the dying minutes of the bidding process, with the referee about to blow for fulltime, Morocco emerged as a late rival to the United 2026 bid. The tiny, football-mad North African nation promises a World Cup spread across 12 cities in 14 stadiums – none of which is ready. Nine will have to be built from scratch, the other five will be renovated.

Other elements of infrastructure are also conspicuous by their absence. Enough hotel rooms to accommodate the millions of fans that would turn up for the 80 games, training facilities for the 48 teams, as well as new roads and train networks all would have to be built at an estimated cost of €14 billion ($16.5 billion).

However, if you listen to the committee behind the bid, it would all be worth it. All of the stadiums and other facilities would be located within a 550-kilometer (342 miles) radius of Casablanca. The stadiums would be designed to be taken down after the tournament, making it the most environmentally friendly World Cup in history.

This is the fifth time that Morocco has submitted a bid to host the World Cup, and this time it may be in with a chance.

This has nothing to do with the “bid evaluation report 2026 FIFA World Cup” submitted by the five-person FIFA Task Force. According to the report, Morocco’s bid is one of the worst ever submitted, scoring just 247.9 of 500 possible points – compared to the 402.8 points for the North American bid.

The report says that the two bids represent “two almost opposite ends of the spectrum.” In other words, rarely has one bid been so good and the other so bad.

So it would seem like a done deal – if it weren’t for Donald Trump.

On April 27,the US president wrote that the joint US-Mexican-Canadian bid was a strong one, and questioned why Washington should support any country that doesn’t support it in the FIFA vote.

Never before has a politician so openly tried to influence a vote in international sports. Now Wednesday’s election will come down to votes for or against the United States and for and against Donald Trump.

Morocco’s problem is that FIFA has said it will publish which bid each national football association voted for.

The question now is how many of these FAs see themselves as extensions of their governments and how many will cast their ballots against Trump. There is no way of knowing.

Seldom has the extent of political influence on a national FA been as clear as it has been in the case of Zimbabwe. Several days ago, the Zimbabwean FA released a statement saying that it had consulted its government and as a result, it would vote for the North American bid. In other words, for Donald Trump.

There is a lot at stake in this vote for FIFA President Gianni Infantino too as, with 16 more teams, this World Cup will be much more expensive than any of its predecessors.

The US bid, given the country’s huge economy, as well as rich sponsors and broadcasters, would be a good fit. In its report, the FIFA Task Force writes that, if held in North America, the 2026 World Cup would generate an estimated $14.3 billion in revenue, compared to just $7.2 billion if it were to be held in Morocco.

And don’t forget that one man more than any other is responsible for getting Infantino elected to the post. Sunil Gulati, the former president of US Soccer was the man who ensured that Infantino got enough votes to win the election at the extraordinary FIFA Congress in February 2016. The US bid winning the right to host the 2026 World Cup could be vital to Infantino’s survival as FIFA president, particularly with a view to when he comes up for re-election next year.

The fact that a lot of Canadians must be wondering whether it was such a good idea to be part of a joint bid with the country of a man who has just described their prime minister as “dishonest and weak” may be beside the point – along with the fact that Trump wants to build a wall to keep out the Mexicans.