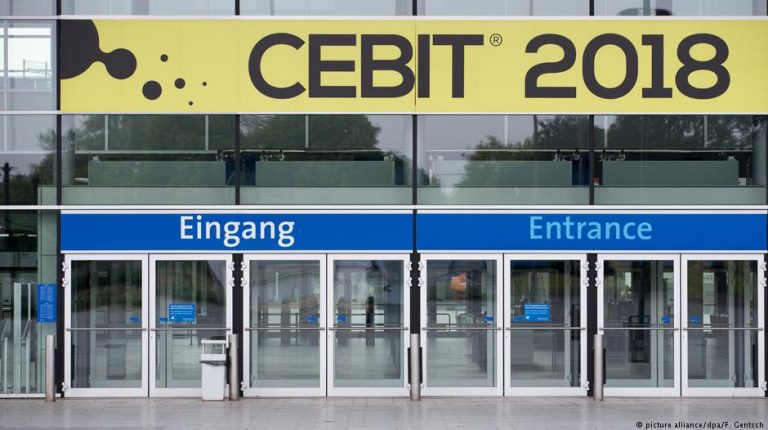 In a desperate bid to secure its future and reinvent itself, Europe’s biggest digital tech expo is trying a new format, turning itself into a technology festival and organizing the event in early summer.Once every year, thousands of technology aficionados from around the world descend on the western German city of Hanover to take part in Europe’s premier information technology exhibition, CEBIT. It was once celebrated as the world’s biggest technology fair, but has lost its luster over the past several years, steadily losing the number of exhibitors and visitors coming to the event.

This year, from June 11-15, between 2,500 and 2,800 exhibitors from 70 countries are expected to present their innovations in Hanover. This is around 200 less than in the previous year and a mere quarter of the number of participants during the dot-com boom years.

The declining interest has even put CEBIT’s survival into question, and forced the organizers, Deutsche Messe AG, to completely overhaul the event in what is regarded as a desperate attempt to attract more visitors and remain relevant.

From the time of its inception, CEBIT usually took place in March every year, but this year it was moved to June, to avoid competition with rival events and ensure that there’s a gap of several months between it and shows like the Mobile World Congress in Barcelona and the Consumer Electronics Show in Las Vegas.

The revamped expo is intended to be a “trade fair, conference and networking event all in one,” said CEBIT chief Oliver Frese. We will, however, have to wait and see whether this strategy works and extends the over-three-decade life of CEBIT as a separate trade show.

This year’s agenda includes all the current tech buzzwords, ranging from artificial technology, the internet of things (IoT), blockchain, humanoid robots, cloud computing and the future of mobility, among other things.

Read more: The cyborgs are here: how to merge digital and biological identities

Among the participants are a who’s who of the tech world, including the likes of Facebook, Vodafone, Volkswagen, SAP, Hewlett Packard, Huawei and Deutsche Bahn.

The fair was kick-started on Monday by a keynote speech from American technologist and virtual reality pioneer Jaron Lanier. Addressing his audience of tech enthusiasts in a packed auditorium, Lanier warned about the “dark side” of technology and the potential for it to be exploited for wrong reasons. “It’s as if technology is destroying my own country,” he said referring to issues such as fake news and hate speech.

Lanier also cautioned about the negative implications of social media, advising people to quit platforms like Facebook and Twitter. He pointed out that many people are “terrified” about not having a social media presence.

“If you grew up with social media you should spend six months out of it to get perspective,” he added.

It’s tough nowadays to engage in any sort of conversation on political, social, economic and even technological topics without referring to US President Donald Trump. During his speech, Lanier was also critical about Trump’s usage of Twitter. “I think Donald Trump is addicted to Twitter. I think if his addiction was cured, he would have a much better character,” he said.

Furthermore, Lanier lambasted the advertising-driven business models of firms like Google and Facebook, describing them as “behavior modification schemes.”

“I am not against advertising. I am just against behavioral targeting,” he said, arguing that it would be better for users to create a paid relationship with digital companies. He cited Netflix’s subscription service as a good example for others to emulate.

Despite Lanier’s warnings of the dark side of technology, some other speakers on the first day of CEBIT like Amir Faintuch, an executive of American tech giant Intel, envisioned a world driven by big data, where computers analyze and synthesize the data and make real-time decisions.

“Instead of waiting for a voice command, the computer of the future will already know what you want. It will recognize your mood and play the right music, for example,” said Faintuch.

SoftBank Robotics Europe, for instance, is presenting the humanoid robot Pepper that is compatible with the Android operating system and NAO6 that can engage in conversations with the help of new cameras and microphones.

The issue of digitization in the event’s host country has also been a topic of discussion at CEBIT. Unlike in automotive and mechanical engineering sectors, Germany, Europe’s largest economy and exporting powerhouse, is not a leader when it comes to digital transformation and lags behind other industrialized countries like South Korea.

Internet connectivity and speed remain patchy in some pockets of Germany, a country where many people and businesses seem unprepared for the profound changes that could be unleashed by digital transformation.

Frank Riemensperger, chairman of Accenture Germany, also criticized the EU nation’s inability to use the potential of industrial data. “We have all the components to become the world’s biggest supplier of industrial data within two years. But we don’t have any ambitious goals.”