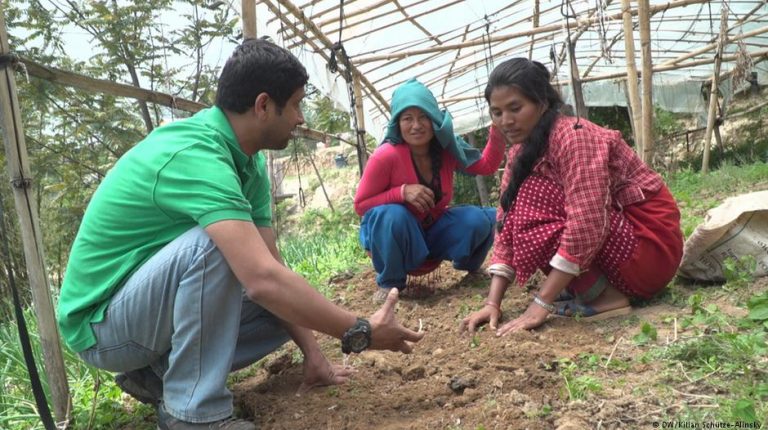 As members of the lowest caste, Dalit women are among Nepal’s poorest people. They’re badly affected by climate change too. A farming project is helping them prepare for global warming. It’s had a surprising side-effect.Project goal: Helping women in the mountainous regions of Nepal’s Kavre district adapt to the effects of climate change — particularly drought and erosion. Teaching basic farming methods to strengthen the women’s financial standing.

Project size: Cooperation with 40 farmers’ groups to reach about 1,100 households.

Project budget: Around $400,000 (€338,300) provided primarily by the Norwegian and Swedish governments, but also by the ICIMOD-member countries Afghanistan, Bangladesh, Bhutan, China, India, Nepal and Pakistan.

A deeply ingrained caste system has dominated for centuries in Nepal. Officially, the system was abolished in the 1960s, but little has changed for the people. At the bottom are the Dalits. They’re traditionally considered “unclean” and have little chance of moving up in society.

Dalit women in particular bear the brunt of discrimination and poverty in the caste system. And in Nepal’s mountainous regions, where conditions are already harsh, these women are increasingly feeling the impacts of climate change — particularly droughts, flooding and landslides.

A pilot farming project is helping them adapt to extreme weather conditions and gain more financial independence. But can it overcome caste prejudices too?

A film by Kilian Schütze-Alinsky