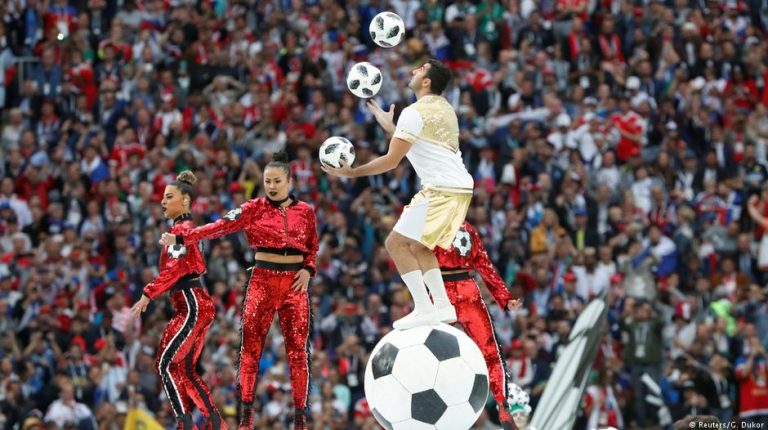 The wait is almost over. After weeks of previews, speculation and anticipation, hosts Russia face Saudi Arabia in the opening match of World Cup 2018. But before that comes the opening ceremony. Follow it live with DW.+++Refresh this page for updates, all times in CEST+++

16:54 – Putin is dragging this out somewhat, so let’s finally get back to the football. It looks like both sides will line up in 4-5-1 formations but, with both significant underdogs in their other group games, the need for a win could make this more entertaining than many expect.

16: 50 – Both teams are out on the pitch and Vladimir Putin is in the spotlight and about to deliver a few pre-World Cup words.

16:44 – It’s over, at a mercifully short 14 minutes. The stage has now been dismantled and some football should break out soon.

16:38 – The pair join forces to sing Angels as 32 individuals, one representing each nation, enter the field led by a German representative in an elaborate hat that I think is supposed to look like an eagle. Ronaldo has a kickabout with the wolf mascot.

16:35 – Robbie makes way for Russian soprano Aida Garifullina, who enters on some kind of litter decorated with, I think, butterflies.

16:32 – And the opening ceremony is underway. After some colorful performers emerge from the tunnel, we get a quick glimpse of Brazilian legend Ronaldo and then Robbie Williams starts shouting/singing depending on your perspective. Let Me Entertain You, naturally.

16:30 – The trophy – or should I say Germany’s trophy? – is in the stadium. It’s in an exceptionally fancy case and is hanging out with Spanish goalkeeping great Iker Casillas.

16:25 – A fair bit of experience in both tonight’s sides. Russia go with Sergey Ignashevich, the 38-year-old CSKA Moscow man tempted out of retirement for the tournament at center back while Saudi pair Osama Hawsawi and Taiseer Al Jassam have 136 and 133 caps respectively.

16:20 – Now we have official confirmation of both teams from FIFA. These may be the two lowest ranked teams in the tournament but the eyes of the world will be on them in 40 minutes.

16:15 – The atmosphere in Moscow is, by all accounts, pumping. The hosts are out warming up on home turf and the anticipation has been cranked up a further notch. More than 80,000 expected tonight.

16:10 – The hosts are keen to get this party started and have announced their team long before their opponents. Fedor Smolov the man to watch for the Russians.

16:00 – Hello! It’s finally here, the day we’ve all had circled in our mental diaires since Germany’s win in Rio almost four years ago. The time for talking, transfer gossip and coach sackings is over and now we can sit back and savor 64 matches over the next month.

We start where we finish on July 15, in the Luzhniki Stadium in Moscow where the hosts surely need to start with a win if they’re serious about escaping a group that also includes Uruguay and Egypt, who play tomorrow. The big news from that one is that Mo Salah looks set to win his fitness battle.

While much of the attention will be on the Russians tonight, both on and off the pitch, the Saudis put up a decent showing against Germany last Friday and look pretty up for this one, if the tweet below is anything to go by.

The opening ceremony should start around 16:30 and will apparently feature Robbie Williams and 500 “local performers” including trampolinists and dancers.

You can read more about Russia’s chances here while we wait for things to get started and find out about how Germany are coping with external pressures here.