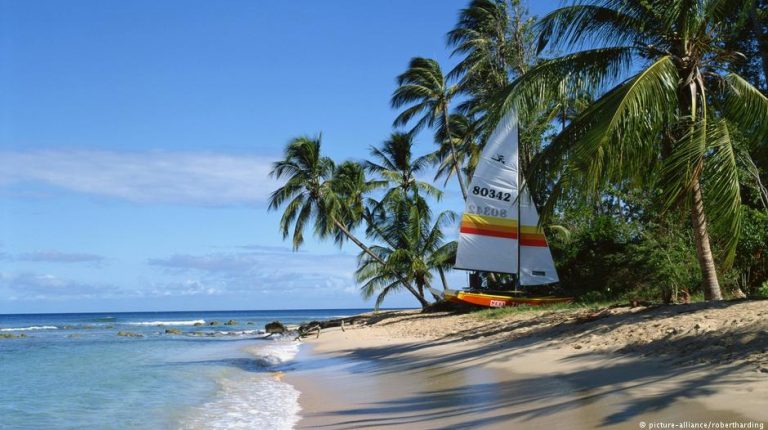 Barbados has been struggling with weak economic growth over the past decade, putting strains on its public debt and deficit. The ailing economy offers a cautionary tale for other small island nation states in the region.Barbados, an island nation in the North Atlantic, doesn’t usually garner the attention of international media, particularly when it comes to its economy. With a population of about 285,000 in 2016 and total economic output amounting to just over $4.5 billion (€3.9 billion), according to World Bank data, the country’s size and role in the global economy is very limited.

Nevertheless, over the past decade the Barbadian economy has been struggling with severe debt and deficit problems. Growth suffered a sharp contraction in the wake of the 2009 global financial crisis and has remained weak since then.

In 2016, according to the World Bank, the economy expanded by a mere 1.6 percent. Weak growth figures have further strained Barbados’ public debt, putting pressure on foreign exchange reserves and helping to spark repeated downgrades of the island’s credit rating.

Barbados currently has the fourth-highest debt-to-GDP ratio in the world after Japan, Greece, and Sudan with the country’s figure standing at 175 percent. A delegation of the International Monetary Fund (IMF) recently visited the Caribbean nation and described its economy as being in a “precarious” situation.

Barbados’ recently elected Prime Minister Mia Mottley this week announced a raft of measures to tackle the problems and put the nation’s economy on a firmer footing.

The proposals are estimated to cost around $660 million and include new fuel taxes, a 50-percent hike in commercial premises’ water bills and a new health service contribution amounting to 2.5 percent of an individual’s income, among other things.

Motley, who was elected in May as Barbados’ first female prime minister, also announced that the country would seek a restructuring of the public debt and temporarily suspend payments due on debts owed to external commercial creditors. She said that the previous administration, under Prime Minister Freundel Stuart, left almost $7.5 billion in debt.

“We will protect the most vulnerable, but we will all have to make sacrifices for our country. Today we move forward together in a new spirit of openness and with a new covenant of hope and opportunity. I ask our domestic and external creditors to accompany us on this journey of rescue, rebuilding, and transformation,” Mottley was quoted by local media as saying.

But the prime minister now faces the tough challenge of balancing her campaign promises with the difficult fiscal reality. Her government, experts say, has to take measures to boost growth and expand the tax base while containing public expenditures and protecting the most vulnerable sections of society from economic distress.

Barbados is not alone in the region when it comes to facing economic problems. Many Caribbean nations are going through a similar phase, experiencing troubles emanating from their high debt and deficit levels.

The origin of many of their woes dates back to the late 1990s. Between 1975 and 1997, a deal between the European Union’s forerunner, European Economic Community, and Caribbean countries gave the latter privileged access to the European market.

The arrangement was intended to bolster economic development in the Caribbean. But the United States argued that it broke free trade rules and filed a complaint with the World Trade Organization in 1997, and won.

As a result, Europe had to change its rules, hurting the Caribbean nations’ growth prospects. To finance growth and investment, these countries then increasingly relied on debt.

The region has been hit by a number of hurricanes over the past two decades, forcing them to undertake debt-driven disaster recovery efforts, in turn weakening their finances further.

To put its economy back on track, observers say Barbados is making all the right moves but the road to recovery will be a long one. If Prime Minister Mottley can make good on her campaign promises while rectifying external and internal debts, analysts underline, Barbados might be out of the red and into calmer economic waters sooner rather than later.