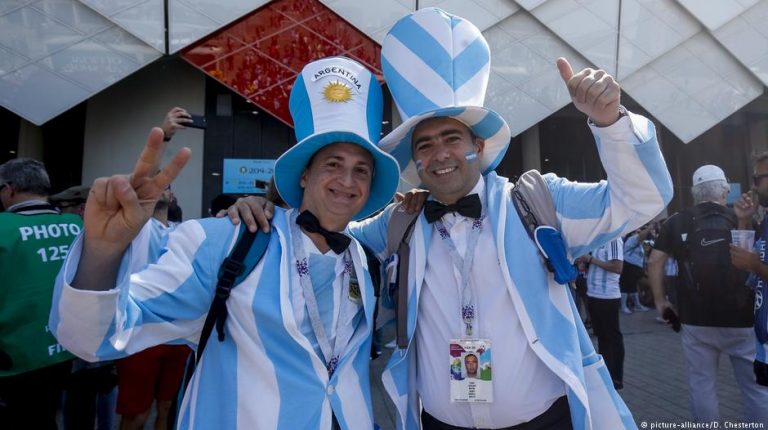 They have spent hours on multiple planes just to get to Russia. But the long journey and huge costs have certainly not dampened the spirits of hundreds of fans from South and Central America.Anyone wandering through central Moscow over the past few days might have been forgiven for thinking that Russia was playing host to the Copa America and not the World Cup. Such is the array of Brazilian, Argentinian and Mexican flags on show.

Hundreds of thousands of fans from South and Central America have made the long and expensive journey for the tournament, adding vibrancy and color to the Russian capital. Indeed, their presence in comparison to the seemingly inconspicuous European fans has been one of the most striking features of this year’s World Cup so far.

For Brazilian fan Gabriel Leite, the time it has taken to get here and the money it has cost him is not important. Despite knowing the tricks of the trade, the 34-year-old travel agent from Sao Paulo estimates he has spent up to $8,000 (€6,900) on flights and accommodation. But he thinks it is all worthwhile.

“I started planning my trip two or three years ago and started saving money,” Leite, who is enjoying his third World Cup after South Africa 2010 and Brazil 2014 told DW. “It is worth it because the atmosphere is so good. I’m going to start planning to go to Qatar [for the 2022 tournament] as soon as the World Cup finishes here.”

Some fans have gone to drastic lengths to be in Russia. There have even been tales of people selling their cars to buy plane tickets. According to Spanish media, one Peruvian fan – desperate to watch his country compete in its first World Cup since 1982 – purposely put on weight so he would qualify as obese and therefore be entitled to tickets in the disabled section, the only area where they were available.

FIFA has sold nearly 2.5 million tickets for this tournament, and while the vast majority have gone to Russian fans, those from South and Central America have snapped up a more than healthy share. Brazilians lead the way with 73,000 tickets bought, followed by Colombians with 65,000 and Mexicans with 60,000.

“I think everyone is making an effort to be here right now,” said Nina Carrizo, one of 54,000 Argentinians to have been allocated tickets. “This is my first time [at the World Cup] and it’s amazing. It’s a dream come true. We are very glad to be here.”

With Moscow’s Red Square temporarily closed off as authorities clear up after a concert last week, many fans have instead congregated in and around the nearby Manezhnaya Square, bringing with them their own brand of festivities.

“We like to party,” said Mexican fan Diego Rodriguez, who has traveled to Russia with a group of sombrero-wearing friends. “Mexicans have been here since the first World Cup in 1930 and we’re going to be here until the last. There are a lot of us here and we’re going to make a lot of noise.”

Morning and night, chants in Spanish can be heard ringing out across the square. The recent blazing sunshine in Moscow has made this feel like a home away from home for the Latin American visitors, while locals have been queuing up to pose for photos with their new-found friends.

Adriana Barrero of Colombia was one of those dragged away from selfie duty to talk to reporters. Unable to leave her young son at home, she has brought along her entire family to the World Cup.

“We love football and we love our country,” she said. “Colombia is my team and I love them. I follow them all over the world.”

“We have a very good team,” she said. “We hope they go very far in the tournament.”

And it is not just humans joining the party. Lola the Mexican rag doll has racked up nearly 13,000 followers on Instagram. She belongs to Marcela Graudins, a 36-year-old environmentalist who now lives in California. Lola has been accompanying Graudins on trips abroad for the past 15 years and has become something of an internet sensation.

“I used to travel for work and my mum was worried I was going to be lonely,” Graudins said. “She told me, ‘Oh you should take the little doll.’ One day I was in Chinatown in San Francisco and because she’s super Mexican I thought it looked interesting to have her there. So I started taking pictures.”

Of course, this World Cup – like many international sporting tournaments before it – has not escaped criticism. Russia’s human rights record has come under renewed scrutiny, with concerns over the treatment of lesbian, gay, bisexual and transgender (LGBT) fans, as well as over racism in the country.

On Thursday, British LGBT campaigner Peter Tatchell was arrested in Moscow for staging what police said was an illegal protest. And on the same day, attackers allegedly targeted a gay French football fan in St. Petersburg, leaving him badly beaten. World Cup organizers have said everyone can expect a warm welcome in Russia. But perhaps the best example can be found in those visiting for the tournament.

“[The World Cup] is very important for peace all over the world,” said Brazilian fan Jose Andrade Neto. “Argentina, Mexico and the rest, we are all friends. We live in one continent and in one world. I hope for peace, that people live in peace. I’m so happy to be here.”