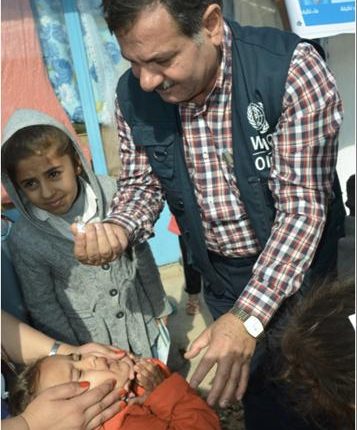 The Eastern Mediterranean region is the largest originator of refugees globally, according to a statement on Wednesday, by United Nations Information Centre (UNIC) press statement on the occasion of celebrating the World Refugee Day on 20 June. In coordination with the UNIC, the World Health Organisation (WHO)’s regional office for the Eastern Mediterranean calls renewed support for the protection and well-being of refugees and other displaced populations, and their right to seek health services with dignity, without discrimination, and without undergoing financial hardships.

More than half of the world’s refugees were found fleeing from Afghanistan, Somalia, Sudan, and Syria, noting that the region also hosts a large percentage of the world’s 17.1 million refugees, with many countries experiencing large migration flows from Africa and the Region towards Europe, according to the statement.

The WHO works with national health authorities and international partners for safeguarding refugee health, adding that the WHO supports health authorities in all key areas, ranging from mainstreaming refugee and migrant health in all policies, to improving access to health care, safe water, and sanitation, housing, and nutrition, to providing humanitarian assistance, the statement read.

Additionally, the WHO works with its national and international partners to ensure that refugee and displaced populations are free from diseases that are preventable, the statement further noted.

“Examples of this important work, in close partnership with governments, can be seen all over the region: whether they are free vaccination programmes and improving health information systems; assessment of available health services; or ensuring access to health care for the hundreds of thousands of refugees returning to their country,” noted the statement adding that the WHO’s work helps guarantee health for all, including refugees.

“Refugees and other displaced populations are vulnerable in multiple unique ways. Lack of access to health care, especially for women and children, increased risk of communicable diseases in overcrowded and often unsanitary living environments, and increased demand for mental health and trauma care: these are the major barriers to guaranteeing refugee health,” said the WHO’s Regional Director for the Eastern Mediterranean Ahmed Al Mandhari.

The statement added that the WHO is working intensively to ensure that all people, including refugees and displaced populations, have equitable access to quality health care with dignity, without discrimination, and without undergoing financial hardship.

The WHO invites the world to join its call for safeguarding and protecting the health of all refugees and displaced populations in the Eastern Mediterranean region, and beyond, mentioned the statement.