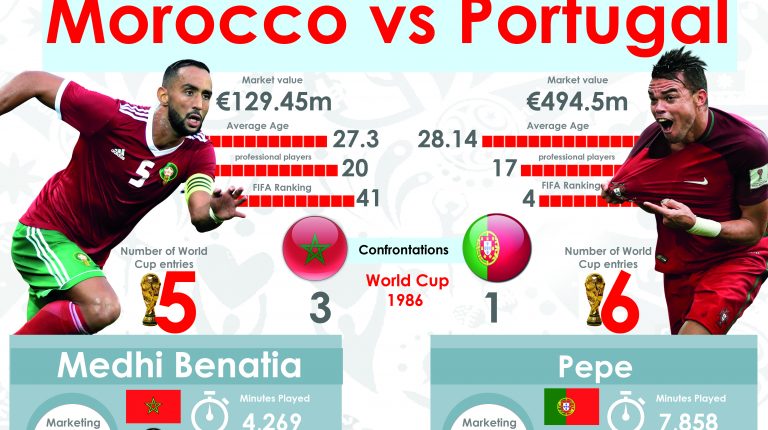 The Moroccan national team will face a tough contest on Wednesday, when they clash with Portugal at Luzhniki Stadium in Moscow, amid the second round of Group B in the 2018 World Cup.

The Lions of the Atlas are in a difficult situation after they lost their World Cup opener to Iran, leaving the team at the bottom of Group B.

Meanwhile, the Portuguese team, led by international star Cristiano Ronaldo, seeks to win the game to increase their qualification chances for the round of 16, especially after they drew with Spain (3-3) last week in their World Cup opener. Iran is now on the top of the group with three points, followed by Portugal and Spain in the second and third places, respectively.

The clash between Portugal and Morocco will also witness a special confrontation between Ronaldo, who scored the first hat-trick of the tournament against Spain, and the Moroccan goalkeeper, Munir Mohamedi.

On the other hand, Saudi Arabia will also go through a difficult contest against Uruguay, defending their prestige after their huge loss (0-5) to Russia in the tournament’s opening match.

Despite the difficulty of the game, the Green Falcons seeks to achieve a positive result against Uruguay and to show the strength of Saudi football, after they were fiercely attacked and mocked for their poor performance against the Russian team.

Saudi Arabia is in at the bottom of Group A, which also includes Egypt, Russia, and Uruguay.

Uruguay aims to tighten its lead of the group and achieve the game’s three points, to ensure their qualification for the second stage.

Spain’s star-studded team is looking forward to beat Iran, as they need the game’s three points to increase their qualification chances for the round of 16, after drawing with Portugal in their World Cup opener.

Iran will enter their next match with high moral, after they won their World Cup opener and seized the first place in Group B. The Iranian goalkeeper, Alireza Beiranvand, aims to keep his clean sheet run against Spain to maintain his team’s lead of the group and ensure qualifying for the next stage.