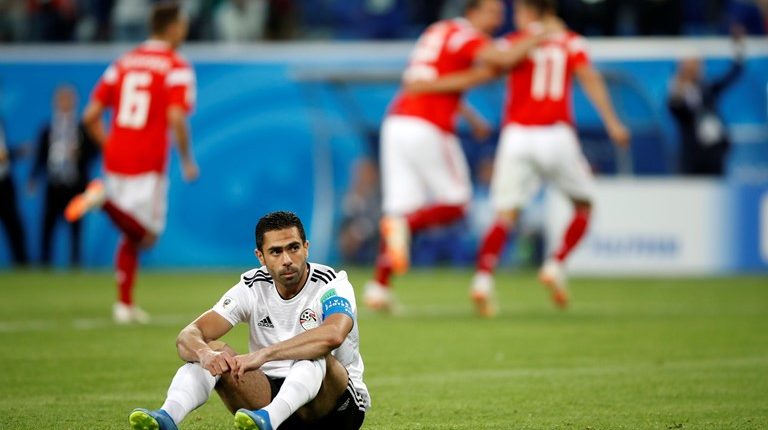 Egypt and Liverpool star Mohamed Salah finally returned and scored his first World Cup goal against Russia, but the Pharaohs’ hopes of progressing to the round of 16 vanished, as the hosts found scored  three times during the second half of the game held on Tuesday at Saint Petersburg stadium.

The match’s first 45-minutes were entertaining and frenetic. Both teams have attacked at every opportunity and created many clear chances. In the second half, Russia was more clinical in front of the goal and put pressure on the Egyptian defensive line, forcing the visitors to make mistakes, which happened in the 47 minute, when the right-back Ahmed Fathy deflected the ball into his own net. The following minutes were catastrophic for Egyptians, as their defence collapsed completely and relieved more two goals within only 15 minutes.

The Egyptians pushed hard in the last 20 minutes of the game, making three substitutions to support the forward line; Mohamed al-Nenny, Mahmoud “Trezeguet,” and Marwan Mohsen were replaced by Mahmoud “Kahraba,” Ramadan Sobhy, and Amr Warda.

Salah tried hard despite his injury he suffered in the Champions League final. In the 73 minute, Salah managed to score from a penalty Egypt’s its first World Cup goal since 1990, but then it was too late.

Afterwards, Egypt’s head coach, Hector Cuper, expressed his sorrow for the team’s second loss in the World Cup, adding that all the players did their best, however there were many mistakes that gifted the hosts their big win. Cuper said that he understands if the Egyptian Football Association is unsatisfied with the results, or wants to end his contract, however he refused to reveal his future plans regarding his management of the Egyptian team.

Egypt will face Saudi Arabia with hopes to register their first ever World Cup win in their last group game.